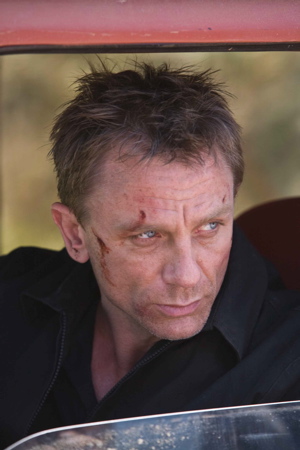 Regardless of what you may have heard, I did not travel from San Francisco to London to see Quantum of Solace before it opened in the US. But I did see the film on my first night in London, at a gigantic movie theater in Leicester Square with a super-sized screen and great sound—just perfect for a James Bond film.

I was very much looking forward to seeing the second Daniel Craig / Bond film, since I thoroughly enjoyed Casino Royal (2006) http://Culturevulture.net/movies/casinoroyale.htm. Although this film is a darker continuation of the Casino Royal story line, standing alone, it is more of a conventional action film—a good fast-paced action film—but not a great Bond film.

When Quantum of Solace begins, it is one hour after Casino Royale ends with the death of Bond’s love, Vesper Lynd, who had been blackmailed into betraying him. Bond, in a combination of revenge and responsibility, seeks out Quantum, the mysterious multi-national organization that is responsible for Vesper Lynd’s death.

Bond follows a whirlwind of clues that lead him to the ruthless international wheeler-dealer and Quantum member Dominic Greene, (Mathieu Amalric). Posing as the chairman of an environmental company, Greene actually intends to control the water supply of an entire continent by buying huge chunks of South American desert and some Latin American governments as well.

Although from my description, Greene may sound like a Machiavellian adversary worthy of Bond, he actually seemed more like a slimy second-rate music producer. Without a great villain to conquer, Bond’s quest for revenge seemed less momentous.

There are more twists in the plot and more vehicle chases and crashes than were strictly necessary. Most were exciting, but some seemed like mediocre substitutes for the ingenuity of many of the action scenes in the other twenty-one Bond films.

Many of the iconic James Bond elements were missing in Quantum of Solace. Where was Q with his collection of ingenious gadgets? Who will own up to selecting the unpleasantly discordant music played at the start of the film? And why was the traditional Bond music played only as the credits started to role? Isn’t James Bond a spy? There was not much espionage in Quantum of Solace.

There were some nice touches for the Bond cognoscenti, including the revival of the Casino Royal roles played by Jeffrey Wright and Giancarlo Giannini.

The locales, from Italy, Haiti, Austria to Bolivia added glamour to the film. The cinematography shined and the Bond women were as gorgeous and one-dimensional as ever.

Daniel Craig, whose star quality carries the film, portrayed 007 as seething with barely controlled rage for revenge. He’s another dark character to be added to the popular genre of sorrowful depressed action heroes á la Jason Bourne. Although it was in keeping with the script, I missed the clever, suave and amusing Bond of olden days, who saunters through danger unscathed.

We should have known from the unusual title, Quantum of Solace, that we would be viewing a Bond overtaken by emotion. The movie title is the name of an Ian Fleming short story from the book, For Your Eyes Only, in which Bond listens to a story told by the elderly governor of the Bahamas about a divorced couple.

The Governor said, “I’ve seen flagrant infidelities patched up, I’ve seen crimes and even murder…and other forms of social crime. Incurable disease, blindness, disaster – all of these can be overcome. But never the death of common humanity in one of the partners. …I’ve invented a rather high-sounding title for this basic factor in human relations. I have called it the law of the Quantum of Solace.

Bond said, “That’s a splendid name for it…I see what you mean…Quantum of Solace – the amount of comfort. …all love and friendship is based in the end on that. Human beings are very insecure. When the other person not only makes you feel insecure but also actually seems to want to destroy you, it’s obviously the end. The Quantum of Solace stands at zero. You’ve got to get away to save yourself.”