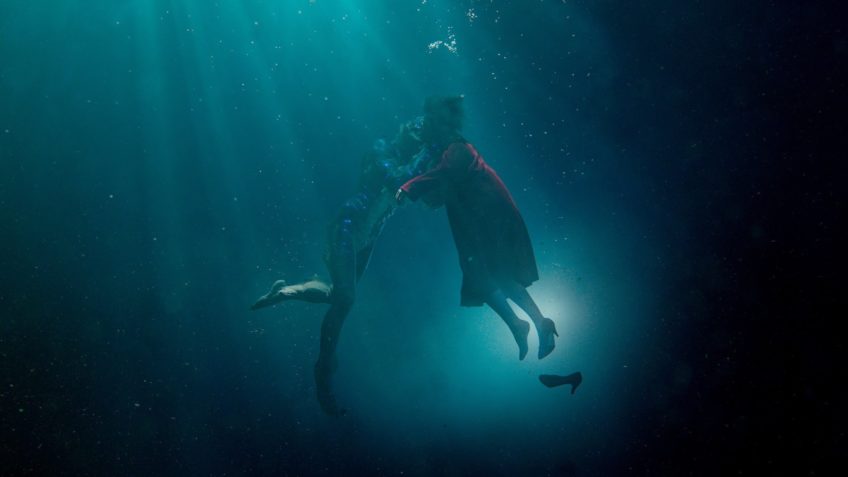 Anyone whose pulse has ever quickened watching classic horror and fantasy films should be thrilled by Guillermo del Toro’s “The Shape of Water.” It’s a picture deeply rooted in the beloved post-war apocalyptic movies that del Toro devoured as a kid growing up in Mexico. But fear of annihilation from atomically mutated creatures in films like “Rodan” (1956) or primordial monsters in “Creature from the Black Lagoon” (1954) has morphed into something much bigger. With “The Shape of Water,” Del Toro has married a classic movie genre with a fantastic love story to produce an expansive vision of what it means to be human in today’s world.

It is one thing to be unsettled by monsters as a child. And clearly del Toro’s youthful sense of terror and wonder are still a part of who he is and what he sees. But his concerns have grown up, too. Some directors never do. Despite remarkable technical skill their films remain sophisticated imitations of movies they saw as boys. But del Toro has used his unique sensibility to explore the beauty and ugliness buried in all people—and creatures.

Del Toro has done this before in “Pan’s Labyrinth” (2006), where he essentially took a fairy tale and turned it into a dark allegory about the rise of fascism in Spain before World War II. A young girl threatened by an evil stepfather found sanctuary in the world of her imagination, guided by an otherworldly creature with eyes in his hands who could see the true nature of things.

With “The Shape of Water,” del Toro’s flight of fantasy is even deeper and more resonant. Set at the height of the cold war in the early ’60s, the story is introduced as “the last days of a fair princess’ rein.” She is Elisa (Sally Hawkins), a cleaning woman on the midnight shift in a top-secret space research center at a time when America is racing the Soviets to conquer the heavens. A mute orphan with huge sad eyes and expressive mouth, she is like a waif from a silent film whose face registers her every emotion. Befitting her stature as a semi-mythical creature, she lives above an old movie palace with film cans stored in her apartment.

With her friend Giles from across the hall (the endearing Richard Jenkins), she watches Golden Age musicals on a black and white TV, and then kicks up her heels on her way to work. Into this cozy little world comes magic from another kind of movie. A great “asset,” a half-man, half-amphibian, rumored to be a god to the natives, has been unearthed in a South American swamp and brought to the lab (roughly the plot of “Creature from the Black Lagoon”) under heavy security, guarded by his sadistic captor Strickland (Michael Shannon). He subjects the creature to random blasts of electric current from a cattle prod, fittingly known, given today’s political climate, as an “Alabama Howdy-do.”

In this kind of film, it is no surprise that the creature, all shimmering gills and green scales, has a romantic soul to match Elisa’s. As the two discover each other, with at first a hardboiled egg offering and then some soothing show tunes, they fall in love. Though they are way more than sentient beings from opposite sides of the track, the inspired screenplay by del Toro and Vanessa Taylor sees them as compatible outcasts in a world where they have been subjected to the awful cruelty of humanity.

The government’s idea is to send the captive into orbit without having to risk a real human life. Or even worse, cut him open as a science experiment before the Russkies can get their hands on him. Elisa hatches a desperate plan to sneak him out of the lab, aided and abetted by her co-worker and protector Zelda, played by Octavia Spencer with all the warmth and sensitivity the scientists are lacking.

It’s a hair-brained scheme almost out of a screwball comedy that only someone desperately in love could dream up. For a brief moment the star-crossed couple is together as the creature marinates in the bathtub before his intended release into the ocean. But the forces of evil, Russian spies and government agents present a challenge to a clean escape and a happily-ever-after ending.

Much of film feels like it’s taking place underwater as if it were set in Atlantis by way of Baltimore. Del Toro, with production designer Paul D. Austerberry and cinematographer Dan Laustsen, has fashioned a mid-century modern wonderland with a color scheme of primal reds and greens that looks like an old Technicolor movie gone to seed. The shiny corridors of the space center glow with nefarious purpose that suggests the paranoia and absurdity of “Dr. Strangelove.”

But it is the lighthearted romance of musicals and old Hollywood movies that animates the story. Throughout the film, del Toro weaves in strands of social commentary with a light touch that still stings. Casual references to racism, bigotry, homophobia and the phoniness of the American dream, make the film seem painfully relevant today and more than a period piece or exercise in genre stylishness.

That del Toro can seamlessly meld the whimsical, playful and profound into a moving film is a tribute to his formidable imagination. He has not lost his faith in the power of movies to lift and transform ordinary lives into something special, even in the face of monstrous people. With “The Shape of Water,” he’s created a modern fairy tale for a disillusioned age.