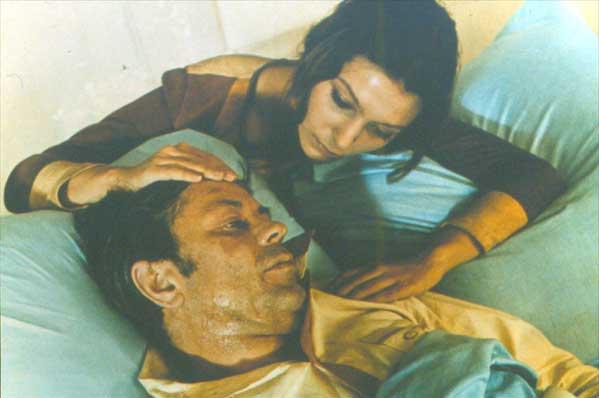 Steven Soderbergh has been touting his soon-to-be released remake of Andre Tarkovsky&#146;s Solaris as an amalgam of 2001: A Space Odyssey and Last Tango in Paris. The same might be said of the original. While Tarkovsky&#146;s adaptation of the Stanislaw Lem novel is perpetually discussed in the context of Kubrick&#146;s 2001, it does share a hermetic sensibility with Tango, as well as a sensuality that is a counterpoint to the iconoclasm of HAL 9000.

It is true that Solaris has received more than a dollop of critical acclaim (Special Jury Prize at Cannes Festival, 1972), but it has been eclipsed by its contemporary, 2001. Whereas 2001 and Solaris are both about a head-on collision between extra-terrestrial life and humanity, the two films’ treatments of technology could not be more divergent.

While Kubrick uses technology as a catalyst and as a map to locate that point at which the artificial threatens to subsume humanity, Tarkovsky remains vested in the natural (both Terra and Solaris) and as a director he is preoccupied with the spiritual entropy that results from the march of technological progress. The journey that psychologist Kris Kelvin (Donatas Baniones) undertakes once aboard space station Solaris is introspective. While 2001 and Solaris both imply a higher power at work, in Kubrick&#146;s universe it is a foregone conclusion that humankind will be assimilated by Artificial Intelligence; any suspense aboard the S.S. Discovery revolves around this interplay. For Tarkovksy, the epistemological questions of truth and identity are only foregrounded by technology, not eclipsed by it.

Kelvin has been ordered to journey to Station Solaris to resolve two issues: What conditions there drove his compadre Dr. Gilaryan to commit suicide and whether or not the scientific mission of Solaris should be abandoned. A three-year old post-mortem of Solaris&#146; last activity includes the testimony of then cosmonaut Berton who maintains that his visions aboard the ship were all too real to be hallucinatory. He is convinced that Solaris&#146; ocean, which blankets the majority of the planet, is sentient, and recommends to his superiors that it be bombarded with X-rays.

Now a private citizen, Berton calls upon Kelvin prior to his mission; Berton is a broken man who remains insistent that his testimony explains the enigma of Solaris. En route to Kelvin&#146;s departure the tropes of a modern Russian metropolis are observed&#151;teeming traffic buzzing across the interstate. These blistering shots, which foreshadow Blade Runner, are an exception to the otherwise tentative pace of the film.

Kelvin&#146;s arrival on Station Solaris is fraught. The remaining two scientists, Dr. Snauth and Dr. Sartorius, are, respectively, reclusive and on the knife&#146;s edge of madness. A video suicide note by Dr.Gibaryan ominously anticipates that Kelvin&#146;s clinical training will prove useless to the task of resurrecting the space station. The only thing that is resurrected is the spirit of his dearly departed wife, Hari. Hari comes to Kelvin in his boudoir as more than an apparition; she is a dream made flesh. Their contact is subtle, but erotically resonant.

After a fashion, the shambling pace of Solaris begins to suit Tarkovsky&#146;s purpose. There is a scene in the space station&#146;s drawing room that takes place at 1700 hours, where for 70 seconds the crew experiences weightlessness. The temporal languor of the moment is exquisite, as Kelvin and Hari pulse across the stateroom and candelabras become as driftwood in an astral plane. A triptych of Russian landscapes is seen, each painting unfolding as Kelvin himself becomes momentarily torn in half&#151;his surfeit of memories contesting the preternatural ebb and flow of Solaris&#146; ocean seen just beyond the shell of the man-made craft.

Natalya Bondarchuk&#146;s Hari is a haunting presence. She steals every scene she grafts herself onto&#151;from her first appearance where Kelvin literally scissors her out of her dress to the point where she epitomizes despair. With his shock of Sontag-gray flecks, Donatas Baniones is a Lithuanian Gary Cooper. His conflicted Kris Kelvin is unable to deport himself as a psychologist, too quickly consumed by his memories. Confronted by his past, he abdicates both his role as &#147;ship&#146;s doctor&#148; and mission specialist.

Despite the fact that at times Solaris is more My Dinner with Andre than space opera, it is a studied superego of conscience and ideal to the id of 2001. With its paucity of special effects, umpteen changes in film stock and deliberate pacing, Solaris upends sci-fi&#146;s propensity for making a fetish of technology, as well as its deep-end moralizing and hubris. Soderbergh has a hard act to follow; his arbitrage of indie and Hollywood accessibility will not necessarily ensure the grace and poetry of this landmark film.