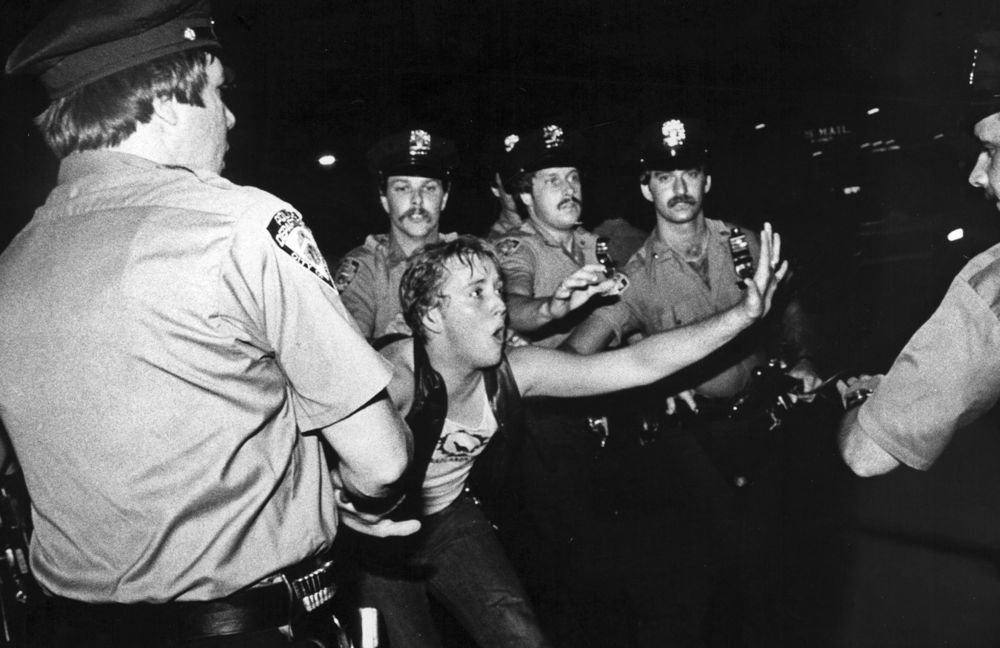 Two acclaimed documentaries, Before Stonewall (1984) and After Stonewall (1999), bracket the seminal event itself, and Stonewall (1995), a piece of drag fantasy-fluff, exploited it. Given its iconic status, it’s surprising that so little documentary attention has been paid to the Stonewall “riots” of late June 1969-until now. Veteran documentary film directors Kate Davis and David Heilbronner turn their attention to the events on the first of three (or five) nights of the popular insurrection in Greenwich Village. Based on David Carter’s 2004 book Stonewall: The Riots That Sparked the Gay Revolution and employing extensive archival film footage and eye-witness accounts of several participants, the film makers weave a highly evocative reconstruction of the broader social and political contexts of those hot summer nights in New York City, making a powerful argument for why this was no mere riot, but truly an “uprising” by a cruelly and severely oppressed minority group.

In the 1960s homosexuals were considered, at best, weak, cowardly, supercilious, and mentally ill. “The average homosexual,” Mike Wallace announced to America in “The Homosexuals,” a 1966 “CBS Reports” in-depth report, “if there be such, is promiscuous. He is not interested in, nor capable of, a lasting relationship like that of a heterosexual marriage.” More insidious, educational films of the day, now frequently screened for the sport of mocking their absurdities, taught that homosexuals are sexual predators, who hide in the shadows of society and are driven to prey upon innocent children. Homosexuals, and by this was usually meant gay men, were not legally permitted to congregate in numbers, were banned on moral grounds from many professions, were committed to mental institutions against their will, and subjected to vicious “treatments” to cure them of their disease of homosexuality, including aversion therapy, electroshock therapy, and lobotomies. For homosexuals there was no closet to come out of-survival was a matter of constant vigilance, secrecy, and for a certain number escape into the anonymity of large cities and into the gay subculture, which was carefully cloaked from the prying eyes of outsiders. Discovery meant losing everything worth living for.

Davis and Heilbronner do a magnificent job of evoking and demonstrating the realities of pre-Stonewall America, and drive home how brave and, frankly, how pushed beyond the limits of tolerance, the patrons of the Stonewall Inn were on the night they snapped. The bar was, as one interviewee put it, “a toilet.” Like all gay bars, it was subjected to frequent raids by the vice squad. Also, like most gay bars, protection from the police, as spotty as that was, was extorted by pay-offs to the Mafia. Without Mafia protection, no gay bar could serve liquor or even stay open. The Stonewall Inn permitted same-sex dancing within its four walls, something strictly against the law. The bar’s habitués included a then-typical mix of disparate patrons-drag queens, queer street kids, hustlers, as well as college students artists, and plenty of middle-class white gay men with careers and families. Some of the bar’s clientele survived on the margins of society and had little if anything to lose, while many other patrons had a great deal to lose indeed.

Stonewall quickly became mythologized into gay folklore. The post-Stonewall political narrative today increasingly privileges the queer, multicultural component in the retelling-drag queens of color who picked up bricks and broken bottles. While such folks were indeed there, and in no small numbers, Stonewall Uprising corrects this gradual erosion of the historical record by going back to the original sources. Davis and Heilbronner keep their focus on the Stonewall riots themselves, and neither editorialize nor even carry the narrative forward in time beyond those hot summer nights.

What actually happened has been partly forgotten, and partly, deliberately obscured. It was the middle-class students, artists, and professionals who created a political movement out of this popular eruption of resistance, who went on to found the gay political movements and other organized responses. The reader would do well to pick up the narrative thread by reading Martin Dubermann’s 1993 autobiographical Stonewall or any number of LGBT history texts. In any event, without the political will that built upon Stonewall, those riots would have slipped unforgotten into the mists of time, and who knows when, how, or even whether there would have been a gay movement in the United States. As Davis and Heilbronner stress, Stonewall was no mere riot, but a popular uprising-a seminal insurrection against civil authority in America last seen during the dire years of the Great Depression and not seen since.