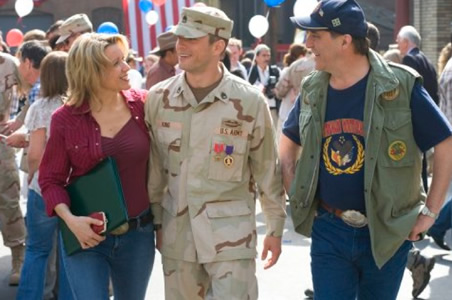 Stop-Loss opens like most films about the Iraq war. We see a group of American GI’s being guys- kidding around, talking about girls, letting us glimpse their deep loyalties to each other, resenting the hardships of war but doing their duty. We see the anxious boredom of their routines, and then the rapid transformation to violence, as their check point is fired upon by a speeding car, and our guys give chase. Since the terrorists’ act seemed both foolhardy and unproductive, I assumed our boys were, like Custer, pursuing a few renegades only to find themselves surrounded by 3,000 Sioux. In this case, the ambush was in an alley, and though there were only a handful of insurgents, they had the high ground of rooftops and second floors, and they were armed to the teeth. Predictably, our guys showed guts and grit. They fought well, displayed leadership and skill, some were wounded, some were killed, a lot of insurgents were dispatched, some civilians were sacrificed, and our heroic central character saved the life of his best friend.

The above description suggests how completely predictably Stop-Loss began. The above description omits how as my wife and I watched that sequence our stomachs knotted, we instinctively reached for each other’s hand, and within minutes we were both quietly sobbing. I wasn’t sure if I was moved because this movie cliché was being done with consummate skill, or if I was just aching for our real-life boys in harm’s way. Two hours later, during the film’s final, non-violent but equally dramatic scene, my wife was again sobbing, but I was seething. Why the different reactions this time? My wife felt that the film captured an emotional and ethical dilemma, where every option is tragic. I felt that after taking me from one predictable, trite, and emotionally simplistic moment to another, director Pierce chose an ending that was both inauthentic and cowardly.

In 1999, director Kimberly Pierce was Hollywood’s flavor of the month. Her $2 million Boys Don’t Cry garnered well deserved plaudits, earned six times its cost at the box office, and brought Hillary Swank a best actress Oscar. Given her desire to do only projects of quality and given some bad luck as various projects fell apart, it took almost nine years for Pierce to realize her second film. Inspired by her brother’s enlistment in the army after 9/11, Stop-Loss tells the story of three friends from a small, Texas town who enlisted together, fought together, and are now being discharged together. But with not enough new volunteers to fight in Iraq, the army exercises a fine-print clause in soldiers’ contracts. Even after their enlistment time has expired, the President can order them back for extended, multiple tours of duty.

Our central character, Sgt. Brandon King (Ryan Philippe), has seen enough of the killing. He feels the President lied about why they were sent there, and he is morally exhausted from the responsibility of leading men that he couldn’t keep from being killed or maimed. His best friend Steve Shriver (Channing Tatum) is ambivalent. He likes the action, likes being respected for his skills, is being courted by the military with promises of sniper training, and has more status as a soldier than he can ever hope to have in civilian life. But he has promised to marry an impatient Michelle (Abbie Cornish) eager for him to be discharged and come home to some good, old-fashioned loving. Their friend Tommy (Joseph Gordon-Levitt) is the truly walking wounded. Eager to re-enlist in what feels like his only real “family,” he is in constant emotional pain and given to self-destructive, self-anesthetizing behaviors. When Brandon decides to resist re-enlistment (rightly calling it a “back door draft”), he takes to the road with Michelle, who still loves Steve, but is bewildered by his desire to return to the army and scared by his evident post-traumatic stress syndrome.

Ryan Philippe seems to mature as an actor with each new role and commands the large screen well. Channing Taum displayed considerable acting chops in A Guide to Recognizing Your Saints; Joseph Gordon-Levitt (Brick, The Lookout) is one of the better actors of his generation. And so it’s painful to watch as Pierce wastes their talents. Levitt’s character is essentially forced to wear a sign around his neck saying, “Hey, I’m the one headed for suicide.” Philippe and Tatum are placed in an agonizing dilemma about whether to resist their forced re-enlistment. With better writing we might have seen them wrestle with the complexities of this life-altering decision, and seen what their choices might tell us about their community, their families, and their character. Instead, they react with violence or mini-breakdowns that are screams for help, but not much else. The friendship between the two men doesn’t evolve when it’s tested by their different reactions to this choice. We even have a scene where they’re fist-fighting in a cemetery, and, between punches, yelling banalities about what they feel. Perhaps we’re supposed to realize that guys have trouble expressing their feelings to even their best friends? It’s cringe-inducing.

If the characters are never allowed to develop, the story-telling fails as well. When Brandon sets out on his road adventure, Michelle goes with him for no reason other than they might have romance/sex and we’ll get to see more of the telegenic Cornish- looking smashing in a Stetson. Her character, never fully realized, exists only for Steve to face a hard choice- marriage or the army. And then there’s the conclusion (MAJOR SPOILER ALERT: you may want to skip the tirade in the next paragraph).

We know where Steve is headed; he never seriously considers not going back for “the best years of our lives.” We know that Tommy will never be a survivor. And even Brandon is clear about his decision: he doesn’t want to go back. Moreover, his every experience nurtures that impulse. His parents want him to choose life, even if it means exile. With Steve choosing death, Michelle will probably follow Brandon anywhere. Visiting one brother soldier who was scarred and maimed (Victor Rasuk, in a lovely performance) and the grieving parents of another brother soldier- reinforces how the responsibility of command in this war is toxic to Brandon’s soul. His commanding officer and best friend want him to return, but not for reasons that ever speak to the Brandon who has been changed by combat. We never see an experience or hear a reason to return that would resonate on Brandon’s emotional register. And so what are we to make of his decision to return to the army? Two conclusions seem inescapable. Pierce was incapable of writing this character in a way that the decision would make any sense given the person we had watched him become. And second, Pierce was so wimpy about offending the small-town Texas sensibility that she celebrates throughout the film- that she couldn’t allow her character to be true to himself and repudiate the military. The stop-loss phenomenon is wrenching, and who amongst us can judge those faced with a forced return to Iraq, imprisonment as a war resister, or exile in Canada or Mexico. But if Pierce is going to create a character who has the deep desire, as well as the insight, integrity and courage to resist the military- then she owes it to Brandon to let him be true to himself. Alas, Pierce lacks the courage of her own creation.

Stop-Loss isn’t a terrible movie, it’s just mediocre. And that’s especially disappointing given that co-writer and director Pierce’s first film was such a thoughtful exploration of Southern, working class insecurities, anxieties, longings and confusions that play out around gender. The Brandon of that film struggled with options and expectations, and dared to make choices that were dangerous but authentic. The Brandon of this film is nowhere near as complex and is never given the chance to find his bravery and his authenticity.

If you read the reviews of Stop-Loss, you can the feel critics rooting for the admirable Pierce to succeed, and for a film about the Iraq war to be both artistically fine and commercially successful. Five years into this war, only Brian DePalma’s Redacted is aesthetically and politically memorable. And every single film about this war has been a commercial dud. Like everyone, I was rooting for Pierce to succeed, and I want to finally see a non-documentary film about this war that works as both art and commerce. It’s like waiting for Godot.