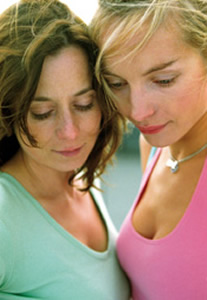 In Summer in Berlin, director Andreas Dresen presents the portrait of a friendship between two women, Nike (Nadja Uhl) and Katrin Engel (Inka Friedrich). In the German tradition of the Kammerspielfilm, this is a closely and lovingly observed study in psychological contrasts. Nike and Katrin are neighbors in a large, dank, impersonal apartment building in contemporary Berlin’s still seedy Prenzlauer Berg district. One unmarried, the other a divorced single mother, both find themselves drifting aimlessly, in a purely lower middle-class way (more Taugenichts than Spiessbürger), through a hot Berlin summer. They sit up late into the night on Nike’s top-floor balcony, hanging out with each other, talking, slowly getting bombed as the northern summer sun slowly fades.

Dark-haired, alcoholic Katrin is the single mom, struggling through chronic unemployment and a rage-filled animosity toward her ex-husband. Her son Max (Vincent Redetzki) soldiers through his mother’s increasingly erratic, alcohol-sodden setbacks as bravely and stoically as he can. Inka Friedrich’s mousy everywoman character has echoed through New German Cinema, from the quotidian Berliners of Wim Wenders’ Wings of Desire (Der Himmel über Berlin) to Angela Winkler’s eponymous Katharina Blum, the seeming victim of hidden social forces.

Nike, blonde, vivacious, and man-hungry — in what could be viewed as a situational-lesbian love story — works as a caretaker for elderly shut-ins. A naturally giving soul, Nike has a bad habit of taking too much initiative, caring too much for her mostly senile wards. And perhaps too much for her best girlfriend.

Dresen applies a gently humorous touch throughout his vividly sketched gallery of the elderly personalities Nike attends to. Pensioner Oskar (Kurt Radeke) is a wonderful case in point: "Nothing beats a good cup of coffee," Oskar thrums to Nike in an early vignette. "That’s tea, Oskar," she replies. Daily he turns imperious, seizing upon the discovery that someone has stolen his coffee. Of course Nike, who is being implicated in the theft, always finds the coffee can, in a cupboard or the fridge. Having again rescued the "purloined" coffee, Nike is admonished by Oskar to keep the door closed. (To thwart the real coffee thieves? the audience may think Oskar is thinking.) "The radio gets out," Oskar huffs.

Nike’s life soon takes a turn for the worse, when her naturally overly giving nature meets its match. One-night stand Ronald (Andreas Schmidt), a spindly, shabby-appearing long-haul truck driver, immediately moves in and the two begin playing house, as if pretending can make their problems disappear. Even when Nike learns Ronald has abandoned a wife and kids, not to mention women and children in several other ports of call, she cannot quit him. And with this new entanglement, Katrin grows predictably jealous and fearful, and her drinking spins out of control.

The levity and the director’s incisive yet compassionate eye for human foibles take a darker turn. Up until now the two women have been spectators to their own lives, enjoying the show from their balcony seats high above the city. The coziness and safety of the distance afforded by their perch turns vertiginous. Finding themselves caught up in dangerous webs of petty desires and small egos (their own and others), their lower middle-class everywoman lives take on dramatic proportions, and teeter toward the tragic.