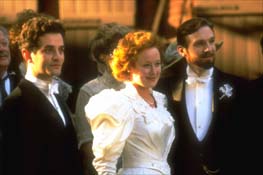 "Sunshine"is the translation of a markedly Jewish family name, Sonnenschein, and it is also the name of the elixir ("A Taste of Sunshine") which makes this fictional family’s fortune in late nineteenth century Hungary. Academy Award winning Hungarian director Istvan Szabo (Mephisto, Meeting Venus) also penned the script for Sunshine, a multigenerational family saga, along with Israel Horovitz, a prolific playwright with few prior screen credits.

Narrated in voiceover by Ralph Fiennes, who plays the patriarch in each of three generations of the family, Sunshine begins with great promise, offering handsome period settings and lavish costuming. In a large cast of characters, the focus quickly falls on Ignatz (Fiennes) and Valerie (luminous Jennifer Ehle), cousins brought up as brother and sister. They fall in love and marry, over parental objections based on Jewish tradition of not marrying blood. Szabo lingers over elegant traditional Jewish wedding scenes. (His Sabbath scene, too, is a loving observation of the most important of Jewish rituals.)

Ignatz becomes a lawyer; he is an idealist and honest, but ambitious as well, not beyond finding methods to ameliorate the effects of the law to please his superiors as he works his way up in the Austro-Hungarian judiciary. Ultimately, to attain a seat on the Central Court, the Sonnenschein name is traded in for a "more Hungarian" sounding name, Sors.

Thus, the two connecting themes through the generations are established – assimilation of Jewish identity into the non-Jewish mainstream society and inappropriate romantic choices. By the time the first segment of the story is told, Ignatz, rigid and unchanging in the face of changing circumstances, has lost the love of his wife and become a tyrannical old curmudgeon.

As if clocked in a factory, the first hour of three has passed, and Szabo moves on to the next generation. Only at that point do the undermining weaknesses of the film start to nag. Szabo has provided an interesting series of events and it was easy to buy into the romance between Ignatz and Valerie. The theme has been established, but, alas, no depth of character development has been accomplished. They do what they are going to do and they talk about it reasonably articulately, but it all begins to bog down as a construct: here are the themes we will explore and character A will represent this viewpoint and character B that viewpoint – but it all comes from outside the characters. It is never revealed by events or drama why Valerie falls out of love with Ignatz and we don’t see her fall out of love; what we learn at this crucial plot turn is what she says about it and it comes as a bit of a surprise because the event hasn’t been earned by the storytelling or by the weak character development that has preceded it.

Then, of course, the schematics start to become obvious. Each generation is allotted a carefully timed hour, almost as if the film were planned as a miniseries for television. If you see the greatgrandfather’s pocket watch in segment one, do you doubt that you will see it again in each succeeding generation? If china is broken, if the secret formula is lost, can you not predict the next broken china, the next search for the original source of the family’s wealth? And, most central, if one member of the family slips and uses the old, Jewish name by mistake, will it not happen again? and again? As well, the aphorisms start to fly: "The man who comes from somewhere else is always suspect." and "If we want to find happiness in this life, we must know who we are."

In Generation Two, Ignatz and Valerie’s son, Adam, becomes a fencer. He converts to Roman Catholicism – an ultimate assimilation – and becomes an anti-Semite. He rises to be a national champion only when he reverts to fencing left-handed, his natural predisposition. One almost expects a trumpet to fanfare the telescoped irony. (Adam’s romantic digression makes his father’s seem trivial and the joyless sex scenes in both this and the Third Generation convey none of the passion that the script would like you to believe is there.) The rise of Nazism leads to sad – and utterly predictable – results for Generation Two.

Generation Three begins with the reunion of Adam’s son, Ivan, back from the camps, with his grandmother, Valerie, now played by Jennifer Ehle’s real life mother, veteran actress Rosemary Harris, a clever bit of casting. It’s the most emotional moment in the film and you can be sure there will not be a dry eye in the house. Fiennes is a terrific crier. Not only in this scene, but thoughout the film, Fiennes manages to glean whatever drama there is to be had from the formulaic script by the sheer virtuosity of his acting. Now we race with him through a communist regime, a witch hunt, the fall of Stalin and the Hungarian revolution of 1956. Ivan switches allegiances and politics with the ease that his grandfather shed his name and his father shed his religion. And each time the Lessons Learned are announced, as in a graveside speech that is surely an embarrassment to screenwriters everywhere. In a later scene, Szabo even has each generation of Sonnenchein/Sors recite to the camera, in overlapping sequence, the lessons they have learned. It is an exercise in redundancy and it patronizes the audience: is it possible anyone could have missed the points?

It’s a shame. The intentions of the film are so good, the core themes are so important, and so much talent was brought to bear, only to produce not a single character of sufficient depth to care about or remember, not a moment of character-driven drama that would get under the skin and give the ideas a visceral resonance. Instead, Sunshine is a Cliff’s Notes on the Lessons of Assimilation which even the pre-Bar Mitzvah set will find unconvincing.