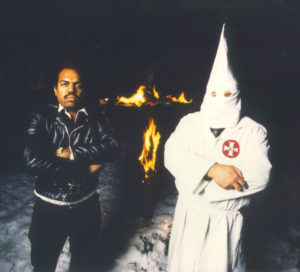 Thought-provoking and (during at least one SXSW post-screening Q&A) argument-sparking, Matt Ornstein’s documentary examines racial discrimination through the eyes of Daryl Davis, a black musician who befriends white supremacists in hopes of changing the world, one Klansman & neo-Nazi at a time. Davis’s unusual mission began at a gig where a good ol’ boy fan revealed his membership in the KKK, leading the bluesman to conclude that prejudice was often the result of a simple lack of communication between people from different backgrounds who might otherwise share common interests and values. Guided by that principle, the subject of Ornstein’s film went on to extend olive branches to numerous hate group enthusiasts, eventually convincing more than 20 Kluxers to open their minds and relinquish their hoods. But things become uncomfortably tense when Davis is confronted by (and reacts poorly to) a group of Black Lives Matter activists, who mock his efforts as a delusional waste of time in the post-Ferguson era, thus raising serious questions about the value of what a representative of the Southern Poverty Law Center refers to as a “retail” approach to the wholesale problem of America’s inbred, institutional racism. 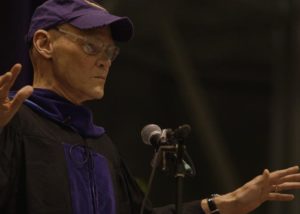 Viewers unafraid of wonkish policy talk and anger-induced blood pressure spikes will be appropriately horrified by director Steve Mims’s effective agitprop documentary Starving the Beast, which tackles ongoing efforts by cash-strapped, tax-averse states to reconfigure public universities into job-training centers where administrators can be fired without cause for championing academic freedom over bottom line profits, professors can be fired for invoking the First Amendment if it conflicts with political agendas, and – worst of all – students are viewed as customers whose future wages could potentially be garnished for years or even decades to come, indentured servitude-style, under pending proposals to restructure loan policy for ever-rising tuition costs. There are many legitimate arguments for reforming higher education which Mims doesn’t address in his film, yet it’s clear that he’s far more concerned with the demagogic con men laying siege to America’s ivory towers than all the best practice options within them. 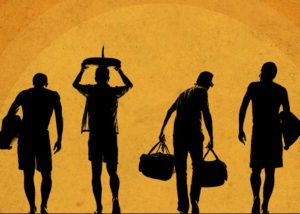 It’s hard to believe there’s any major story of the ‘60s counter-culture that hasn’t already been covered by one of the hundreds (thousands? millions?) of documentaries, biopics, and Behind the Musics already focused on history’s most navel-gazing era. Yet according to SXSW’s own catalogue description, “Orange Sunshine” is somehow, amazingly, the “never-before-told” tale of the titular psychedelic and the idealistic hippie entrepreneurs who established an international drug empire to distribute it to their fellow Baby Boomers in massive, theoretically consciousness-expanding quantities. Combining archival footage with the vivid recollections of key surviving participants on both sides of the law, director William A. Kirkley breathes fresh life into the patchouli-scented corpse of the late, lamented Flower Power movement. 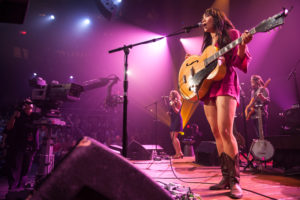 4. A SONG FOR YOU: THE AUSTIN CITY LIMITS STORY

Aside from a first season power outage in the midst of a taping and the time Merle Haggard peed in a corner of the studio, there’s barely any drama in director Keith Maitland’s loving tribute to public television’s venerable live music showcase, “Austin City Limits” (and its comically befrizzed host, Terry Lickona). Yet given the warm and witty reminiscences of the show’s staff and guests — and, more importantly, 40 years of performance highlights by A-list acts from Willie Nelson, Dolly Parton, and Lyle Lovett to The Pixies, Radiohead, and Alabama Shakes – “A Song For You”’s 96-minute running time breezes by in a happy blur of good vibes from the Live Music Capital of the World. 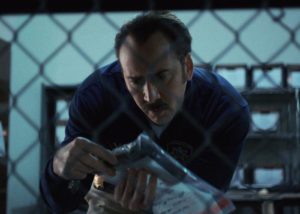 Indie films are where the supremely odd Nicolas Cage lets his superfreak flag fly — and while “The Trust” is nowhere near as weird as, say, the actor’s infamously unhinged performances in “Vampire’s Kiss” and “Bad Lieutenant: Port of Call New Orleans”, “The Trust” is at least worth a rental for some grade-A scenery chewing by its star in service of an eccentric Las Vegas heist flick that plays like a “bottle episode” of a long lost Showtime series you never quite got around to watching. Effectively paired with a deadpan Elijah Wood (as a cynical fellow cop), Cage makes the most of his role as an evidence room lifer who stumbles onto a big score — though the second half of the film stalls in the minutiae of a crime that we never really quite care all that much about.

6. AND PUNCHING THE CLOWN 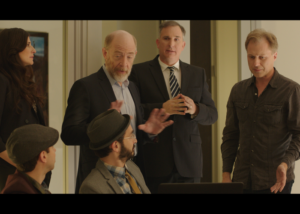 As one of the stubborn people still renting physical DVDs from Netflix (because of the wider, more diverse range of titles available, dammit), I’m used to seeing coming attractions trailers for comedies I’ve never heard of starring people I’ve always liked. Intrigued, I’ll pop the mysterious title into my queue, laugh and smile a bit once it arrives, then mostly forget it within hours of returning the disc in its little red postage-paid envelope. And “Punching the Clown” is definitely one of those movies: an enjoyable enough vehicle for pleasant novelty song comic Henry Phillips about a pleasant novelty song comic dealing with Hollywood unpleasantness, co-starring J.K. Simmons, Sarah Silverman, and a scene-stealing Tig Notaro.

THREE DOCUMENTARY FEATURES THAT SHOULD HAVE BEEN SHORTS 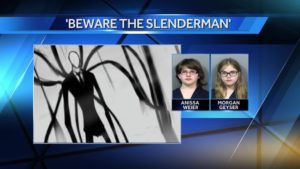 In 2014, two adolescent girls attempted to stab a friend to death in hopes of appeasing Slenderman, a social media meme popularized on the horror site Creepypasta.com. Mental illness combined with the internet’s blurring of fantasy and reality (and the way the real life assailants were eventually incorporated into the mythology that inspired them) all seems like fertile ground for a documentary, yet Irene Taylor Brodsky’s film is too limited, literal-minded, and repetitive to fully justify its nearly two hour running time.

Director Ryan Steven Green starts strong with a fascinating history of dwarf actors in Hollywood and a charismatic group of interviewees recalling their days as the Hollywood Shorties, a.k.a. the little people equivalent of the Harlem Globetrotters. The titular basketball team delighted crowds with a combination of comedy and solid athleticism which the participants had never been able to display anywhere else. But the inevitable disagreements and personality clashes which simultaneously lead to the demise of the group and the origin of The Dwarf Athletic Association of America probably could have been streamlined more effectively into, yes, a short.

Stefan Pokorny is the founder of the company Dwarven Forge, which manufactures figures and terrain for use in “Dungeons & Dragons” campaigns. That’s a fairly interesting career for a man who started life “with nothing” as a Korean orphan – prior to being adopted by wealthy parents who brought him on frequent trips to Europe and presumably helped support his entrepreneurial efforts (after he’d gotten his requisite years of “bad boy” slumming out of his system). We learn a bit about Pokorny’s relationship with his parents (and later see him visiting their baronial gravesite in scenes not unlike Madonna’s staged cemetery visit in “Truth or Dare”). Director Josh Bishop also shows his documentary’s subject drinking too much, being chastised by someone at a convention, and launching a multi-million dollar Kickstarter campaign to expand his business — yet barely connects the narrative dots to build much dramatic tension or dig very deeply. Instead, we’re simply informed again and again that Pokorny’s a kooky, talented, beloved guy (over the course of a long, long 89-minute documentary, which maybe should have been just a tight three-minute promotional video on the “About” page of the Dwarven Forge website).