I recently shared my Top Five favorite films of the 2018 South-by-Southwest festival, but what about the other screenings I attended? What didn’t quite make the list (and why)? Well, let’s start with the…

While arts reporting is hardly a science, artificial intelligence research most definitely is, despite the ethical complexities and potentially alarming dangers that could result from unleashing a technology without fully understanding it first. And indeed, the burgeoning field and its implications are so fascinating that this documentary by Tommy Pallotta and Femke Wolting only missed a spot in my Top Five because the ambitious subjects of my favorite left-brain doc of the festival (“Science Fair”) were mostly adorable, idealistic teenagers who might actually save the word. But “More Human Than Human” is nevertheless a fascinating deep dive into the possibilities and perils of near future AI technology, from intuitive neural control of prosthetic limbs and inexhaustible companions for dementia patients to the socioeconomic impact of diminishing employment for actual humans and our eventual enslavement by evil robot overlords. 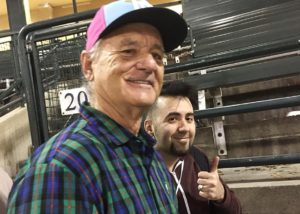 Bill Murray has become the modern hipster Bigfoot, inspiring countless urban legends about unexpected sightings of the comic icon reciting poetry to construction workers, washing dishes in the kitchen of random college parties, popping up as a bartender during SXSW, etc. Yet while Sasquatch sightings are notoriously difficult to document, director Tommy Avallone has compiled a feature’s worth of interviews and charming Murray clips (both from his onscreen filmography and offscreen encounters with random civilians) to answer not terribly mystifying questions about the actor’s motives for popping up in unexpected places and why people love it when he does. And if the foregoing description sounds one-note and weightless as meringue, well, “it just doesn’t matter” (in the words of “Meatballs”‘ head counselor “Trip” Harrison) when the overall cinematic experience is so relentlessly enjoyable. 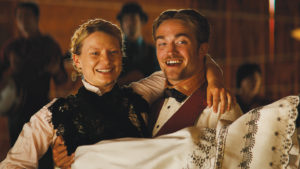 A long time ago in the West, a hapless alcoholic greenhorn with a tragic past (David Zellner) heads out to the frontier in hopes of reinventing his life, only to encounter a grizzled preacher (Robert Forster, in a memorable cameo) who warns that instead of finding a bright future on the outskirts of civilized society, “Things are gonna be shitty in new and fascinating ways.” Sure enough, the greenhorn soon finds himself roped into a deadly misadventure involving Robert Pattinson, Mia Wasikowska, and a tiny little horse in this revisionist take on the genre well-timed for the #MeToo/#TimesUp era. Like previous films by indie stalwarts Zellner (and his brother, co-writer/director Nathan) including “Goliath” and “Kumiko, the Treasure Hunter”, “Damsel”‘s meandering pace requires patience, but may hit the sweet spot for viewers in tune with its humorously deadpan wavelength of modern ennui recast in period drag. 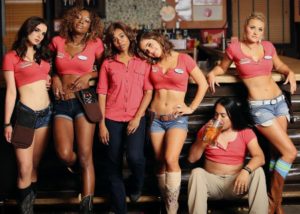 Or, if you prefer your indie dramedies more naturalistic, big-hearted and hopeful, be on the lookout for this latest feature by Andrew Bujalski (the “mumblecore” auteur behind “Funny Ha-Ha”, “Results”, and his metaphysical masterpiece, “Computer Chess”). Set in a gimmicky Hooters-style “breastaurant’ called Double Whammies, the film tracks a day in the life of a working-class hero named Lisa (Regina Hall) who divides her time between den mothering the various personal dramas of her (generally younger) waitstaff, managing her own beleaguered personal life, and keeping the peace with rowdy customers and her misanthropic boss (James LeGros). Small victories and disasters accrue over the course of the film’s leisurely 94-minute running time (with many of the best scenes stolen by Haley Lu Richardson and Shayna McHayle as servers with diametrically opposed yet complementary approaches to their jobs and Lea DeLaria as the establishment’s favorite customer), but “Support the Girls” works best as a portrait of a female endurance and friendship on the rocky road to empowerment. 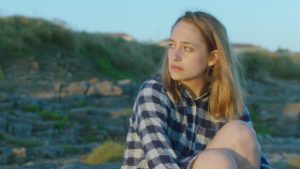 Jemima Kirke. Some love the former “Girls” co-star, while others…do not. A lot. And if you’re one of the people in the latter category, then by all means skip ahead to the next listing, because writer/director Jamie Adams’s chatty relationship comedy is pretty much nothing but undiluted, straight-up Kirke as a mordant, romantically selfish/self-destructive Jessa-esque playwright named Gillian wreaking havoc on the tender heartstrings of a sweet-natured, mildly befuddled bear of a husband (Richard Elis). That said, though, even those who are fans of both Kirke and whimsical British romantic comedy in general may find themselves wondering if they’re watching a complete feature film or bingeing the mid-season episodes of an affable, shaggily enjoyable BBC sitcom given “Wild Honey Pie!”‘s relatively shapeless, low-stakes narrative structure. 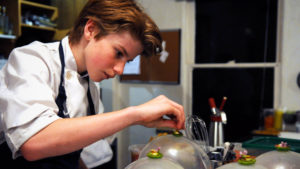 And speaking of “Girls”, there’s a strong flavor of Lena Dunham-style talent soured by myopic defensiveness regarding (fully justified) charges of entitlement in the story of “Chef Flynn” McGarry, a culinary prodigy who came to national prominence after a childhood spent whipping up gourmet dishes in a bedroom outfitted with state-of-the-art cooking equipment and the finest ingredients his parents’ money could buy. To be fair, it’s definitely intriguing to see how and why a 10-year-old became so obsessed with fresh truffles and molecular gastronomy that he began preparing multi-course meals for neighbors, friends of friends, and eventually the elites of East and West Coast eats — and there’s clear artistry in the food porn creations lovingly chronicled throughout Cameron Yates’s documentary (augmented by years of behind-the-scenes home video footage and commentary by the wunderkind’s supportive, neurotic “momager”, Meg). But when the young celebrity cook complains (as he does quite a bit in the second half of the film) that he should be judged solely on his talent and not by the advantages that brought him to national prominence, it’s unfortunate that Yates’s surface-level film doesn’t give voice to any dissenting chefs who paid their dues the old-fashioned way (or even some of the full-grown, multi-ethnic kitchen commandos we see getting barked at by the privileged young white boy in their midst).

This cinematic adaptation of a play by Andy Nyman and Jeremy Dyson (who also co-directed) has a great premise as a celebrity debunker of spiritual phenomena (Nyman) is challenged to disprove three scarifying cases of supernatural shenanigans. The cast (including the ever-reliable Martin Freeman and Alex Lawther, riveting as a traumatized teen) is also solid, yet despite some decent jump scares, chilling atmospherics, and a couple of unexpected twists, the overly episodic narrative ultimately fails to amount to more than the sum of its parts, with an undercooked story that wraps up far too neatly to provoke the lingering unease or existential dread of a truly memorable ghost story.

MY LEAST FAVORITE FILM OF SXSW 2018

AGAVE: THE SPIRIT OF A NATION

No offense to the nation in question, agave, or the hard-working people who transform the eponymous monocot into delicious mezcal and tequila, but this snoozy, self-serious, and overly general documentary by Nicholas Kovaciv and Matthew Riggieri plays more like an overlong promotional informercial for the tourism boards of Oaxaca and Jalisco than an engaging exploration of its subject. Despite beautiful cinematography and potentially interesting subject matter about the challenges facing the industry in question (like the threat of global warming and a shrinking workforce of people willing to engage in the labor-intensive task of agave cultivation), most of the film’s themes and insights are stated rather than dramatized in compelling ways. Likewise, except for a sweet interlude about a domesticated fawn living on the property of one interview subject who nursed the animal back to health, there’s not much in the way of humor, unexpected detail, or compelling subplots to hook us into the lives and personalities of the participants in what often feels like a fairly generic travelogue.