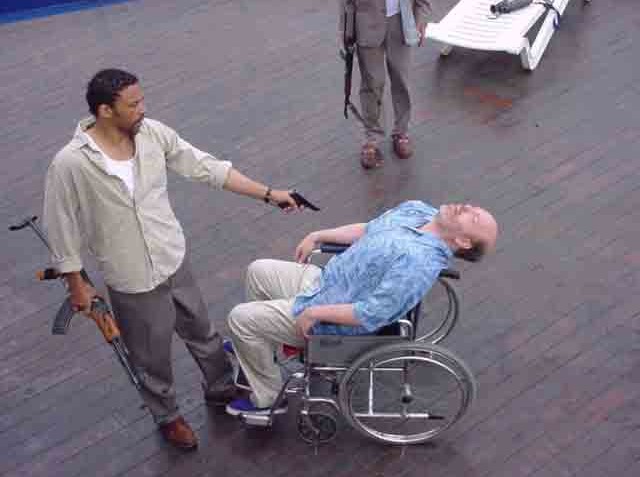 Upcoming productions of The Death of Klinghoffer:

The Death of Klinghoffer

Ironically, The Death of Klinghoffer, an opera by a leading contemporary American composer, John Adams, had its world premiere (1991) in Brussels and has never been mounted by Los Angeles Opera, which co-commissioned the work. Based on the headline-story hijacking of the Italian cruise ship Achille Lauro by Palestinian Liberation Front terrorists in 1985, Alice Goodman’s libretto was bound to be controversial. It refuses to take sides and thus inevitably will inflame partisans of both Zionist and Palestinian leanings. The treatment calls to mind the observation that "one man’s terrorist is another man’s freedom fighter."

Adams has been labeled "post-minimalist," his music showing the influence of Steve Reich and Phillip Glass, but listening to it, it doesn’t seem freighted with the sometimes soporific repetitions of the minimalists. The vocal parts seem perfectly tailored to fit the language of the libretto and augment the emotional impact of the various arias. The choruses which begin the opera and end each scene have a shimmery, ethereal beauty. Still, viewers should not go expecting to come out of the theater humming the tunes.

Penny Woolcock’s film of the opera is not, as some opera films are, a mere filming of a stage production, but a new, filmic treatment of the material that adds a graphic documentary quality and enhances the drama with filming on shipboard. Two opening choruses, Chorus of Exiled Palestinians and Chorus of Exiled Jews are sung with footage in black and white that provides the historical background of surviving Jews, devastated by the Holocaust, emigrating to the new state of Israel, as well as the resulting displacement of Palestinians, in turn creating an entirely new population of refugees. Characters of both Jewish passengers on the ship and of the hijackers are placed within their historical contexts, providing motivation–which is not the same as endorsement of the actions that transpire.

The story is related in a series of arias by key characters–the captain and the first officer of the ship, passengers, and hijackers. The threatened violence of the hijacking itself creates a powerful tension which propels the narrative, even though the outcome is known. The terrorists hold everyone on the ship as hostages, bargaining by radio for the release of 50 Palestinians held in Israeli prisons. When their demands are not met they shoot Klinghoffer, a wheel-chair bound passenger who was an American Jew, and they throw his body and the chair overboard.

In the stage version, Klinghoffer is killed offstage and the pathos of his wife, who thought he was in the ship’s infirmary, learning of his death afterwards, is wrenching. In perhaps the only dramatic misstep of the film, Woolcock graphically depicts the shooting and the subsequent tossing of Klinghoffer overboard, followed by an extended (and overlong) sequence of his body floating down through the waters of the Mediterranean. Since his wife is with the other passengers on deck, it seems odd that she seems to be the only one unaware of the murder and her subsequent scene with the captain is somewhat weakened as a result.

But this is a relatively minor quibble in a film that offers finely sung and acted performances and uses the film medium to amplify the sense of the historic sweep of events and the tragedy of conflict amongst peoples for a safe haven on an ever more crowded, ever more contentious planet. In some ways, the opera/film reverberates even more profoundly now, nearly twenty years after the incident and over a decade since the work was written, because not only does the conflict seem no closer to resolution, but the violence and human cost has escalated and intensified.