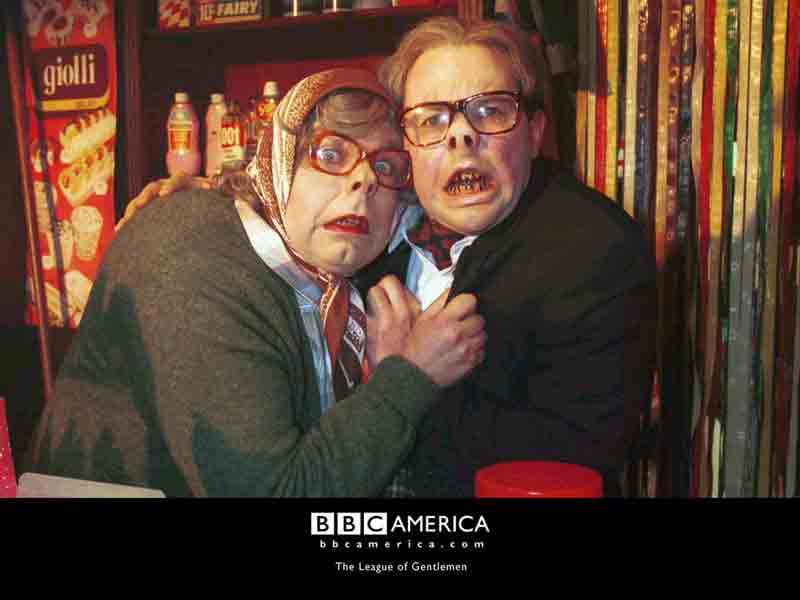 Even though a nosebleed epidemic threatened or killed most of the characters in the closing episode of last season’s The League of Gentlemen, many inhabitants did in fact survive to return for the new season about to be unleashed by BBC America. They are indeed the town folk of Royston Vasey, that festering village of the orthodontically challenged, nestled in quirky provinces of England and peopled by the disturbed stepchildren of Monty Python and John Waters.

This season brings more twisted overlapping plotlines with the likes of transsexual taxi driver Barbara who loves to give the lurid details, gypsy entertainer Papa Lazarou, bad actress Pamela Doove (touring in a dramatization of Anne Frank&#146;s diary as a Nazi), Eunice Evans, the Royston poisoner, sadistic Dr. Carlton who forces his patients to play sick parlor games for treatment and dwarf Kenny, a little person cinema owner who shows only dog movies. That, of course, is only a partial list of the local color.

The League&#146;s core cast and writers (with Jeremy Dyson) are Mark Gatiss, Steve Pemberton and Reece Shearsmith, who play multiple obsessed, freakish, even depraved roles, many grotesquely en travesti. The foursome started out onstage in the London theater fringe, went to the Edinburgh Fringe Festival, landed on radio and were so successful that the series launched in 1999 and is going into its third season (in addition to a Christmas Special).After a pint full of awards, the League is a cult, with legions of obsessed fans.

The first installment visits Pauline Campbell-Jones (Pemberton), finishing her incarceration in Clitclink Prison for kidnapping ruthless civil servant Ross Gains (Shearsmith). She turns into a jailhouse bull, trading sex toys for pens (His dream is to open a pen shop–don&#146;t ask!) and sexually threatening inmates, including Eunice. Ross helps spring Pauline, but forces her to spy on her gender-bent lovie Mickey (Gatiss) who Ross suspects is cheating the welfare system, because he and his brothers have has been on the public dole for 63 years.To throw Ross off the scent, Pauline says Mickey is "thick, stinks and lives in a s–thole."Pauline tells Ross that they are going to be married, to which Ross calls them, "The Lesbian and the Monkey, it&#146;s one of Aesop&#146;s Fables." In this hilarious scene Pauline has sex with Ross who gives up the case but threatens to tell Mickey because, he seethes, "You made me hate my job."

Alvin returns to find everyone dead and he hides the bodies since he has invited Judith for dinner and of course the corpses start to spasm from under the table and become flatulent.How pedestrian for a dark comedy–at least in South Park you expect such schoolboy humor, not from a supposedly famously edgy theatrical troupe pushing the envelope of farce on the BBC.But, wind or not, these bizarre characters are nonetheless memorable as director Steve Bendelack unfolds this surreal sardonic soap opera that can go anywhere. With cryptic village fables floating on the periphery, the league of misfits and malcontents are less pitiable than ruthless, idiotic and totally addictive.