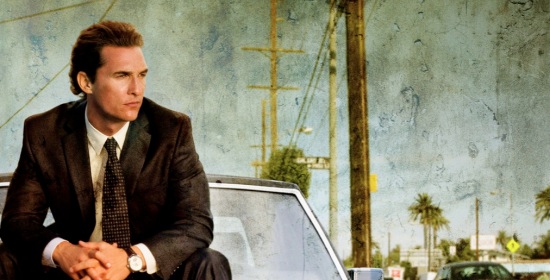 Sure, I get it that when the detective/good cop/lawyer/Angelina Jolie-type walks into his or her stylish, modern apartment alone at night, somebody with a gun will there waiting. I understand that the person we assume to be the villain will turn out not to be, and vice versa.

It’s everything else that I don’t get. Such as, how does the hero figure it all out (and why does it take him so long)? Starting back with “The Maltese Falcon,” it’s all had me scratching my head.

Mick Haller (Matthew McConaughey) is the lawyer—he’s a “Lincoln” lawyer not because of McConaughey’s chiseled features but because his office is his Lincoln Town Car. Mick is known around town for taking, and winning, questionable cases. Scuzzy cases, you might even say.

His latest is that of spoiled rich boy Louis Roulet (Ryan Phillippe), who has been accused of beating up a prostitute. Louis, of course, claims innocence. But—who knows? And if not Louis, who did beat up the prostitute? And who actually killed another prostitute a few years back, a crime for which a Latino man is doing time at San Quentin?

The Mick Haller character is nicely developed, and McConaughey plays him with panache. Mick has an ex-wife, Maggie (Marisa Tomei), with whom he’s on friendly terms-as in ex-wives with privileges-and a young daughter. He also has a driver, Earl, wittily played by Laurence Mason. William H. Macy has an all-too-brief role as a private detective who regularly does jobs for Mick.

The other characters lean towards the stereotypical. Frances Fisher plays Louis Roulet’s tiger mother, icy except when defending her child. Others—prostitutes, prosecutors, and so forth—are ably done, though not particularly memorable.

The LA settings are bright and sunny, with freeways that look more like beautiful ribbons of concrete than the smog traps that they are. “The Lincoln Lawyer” would have made a great film noir if LA had been painted in darker colors. “Chinatown,” after all, did it.