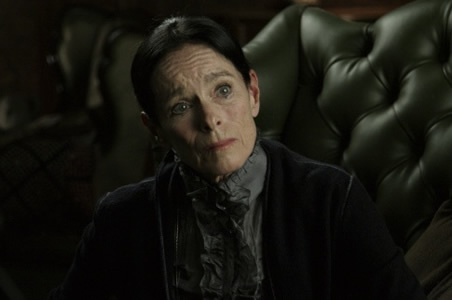 The word “Orphanage” is likely to conjure up sinister images of overcrowding, hunger, and neglected or abused children. Such an unfeeling institution, either sterile or squalid, is a predictable setting for a ghost story.

And yet the dreamlike beginning of Juan Antonio Bayona’s The Orphanage shows several obviously happy and well cared for children playing a game of tag on a green lawn, the air softened with filtered sunlight and drifting seeds. Inside, a shadowy woman on the phone sighs and admits that she has not yet told Laura she’s been adopted. The other children, she says sadly, will miss her. This is plainly an orphanage where adoption is not so much a deliverance as the occasion for bittersweet farewells.

Fast forward three decades to the present. Laura has returned with her husband Carlos and their solitary young son, Simon to the now abandoned building, which Laura and Carlos plan to reopen as a refuge for disabled children. The elements are thus set in place for that subgenre of horror that began with Henry James’ “The Turn of the Screw” and almost always involves an old house with a history, a vulnerable woman, and a troubled child or two.

The direction of Bayona and the script by Sergio G. Sanchez combine to make a thought provoking film that achieves its chills through pacing and plot rather than the depressing modern standbys of special effects, gore, and loud, unexpected bursts of music. Certainly the orphanage itself is a good setting. It is large enough to be slightly confusing, and still showing its age in spite of the new furnishings and repairs, with plenty of shadows, dark corridors, and stained glass. But Sanchez confounds haunted house conventions by giving it an apparently happy rather than sinister history. Whatever bad memories Laura may have – and Belen Rueda’s performance conveys the anxiety of a woman who has more than a few – do not come from her years at the orphanage, which she remembers as a happy, secure home.

The uncanny in this film is effectively implied through everyday incongruities that multiply and increase in seriousness. Simon explores a tidal cave where he has a whispered conversation with a new “imaginary friend.” A small pile of seashells is found heaped on a porch. A grotesquely masked child appears at a children’s party. Ultimately, Laura and Carlos face one of the worst waking nightmares that parents can experience. Simon vanishes.

The film offers its audience two puzzles to work out — the riddle of how the past of the orphanage is connected to the present, and the question of what, truly, is happening. Are the ghosts real, or is Laura imagining them? Is Simon’s disappearance supernatural, or a sadly mundane tragedy? Laura and Carlos’ anguished search for their son and for answers to these questions lead each of them to separate conclusions.

Belen Rueda is convincing as a woman adept at amusing or reassuring her child, but still painfully self-conscious about motherhood. Fernando Cayo is the patient, well-grounded Carlos, and Roger Princep is endearing as the imaginative, volatile Simon. Geraldine Chaplin appears briefly as a medium who may or may not have compassionate insight into both Laura’s state of mind and the mysteries of the orphanage.

This able cast and the confident storytelling of Bayona and Sanchez, make The Orphanage a “ghost” story that manages to be both satisfying and ambiguous, offering the audience just enough tantalizing hints to inspire lively discussions long after the credits have rolled. Anyone who enjoys a good scare – and a good conversation – should see, and enjoy this latest addition to the Jamesian tradition of intelligent horror.