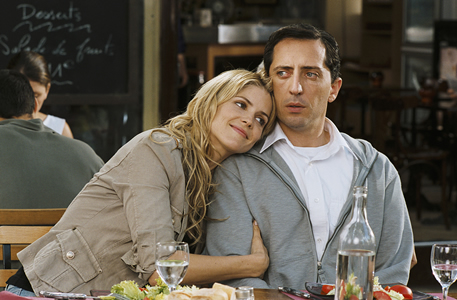 Francis Veber, the writer and director of The Valet is a master of French comedy. From the first film he wrote 35 years ago, Le Grand Blond Avec Une Chassure Noire (1972), remade in the U.S. as The Man With One Red Shoe (1985), to La Cage Aux Folles (1978), remade in the U.S. as The Birdcage (1996), to his more recent Le Placard (The Closet) (2000), he has perfected the art of French farce. With his new film, La Doublure (The Valet), he has continued and refined his comedic oeuvre.

The Valet is the story of François Pignon (Gad Elmaleh), a hapless car attendant at an upscale Paris hotel, who inadvertently finds himself in the middle of a contretemps among the mega-rich Pierre Levasseur (Daniel Auteuil), his even richer wife Christine (Kristin Scott Thomas), and Elena (Alice Taglioni) the supermodel with whom Pierre is having an affair.

Francois, the valet, innocently passes Pierre and Elena on the street just as a paparazzo snaps a picture of the three of them. To avoid a messy divorce, Pierre, with the help of his lawyer (Richard Berry), pays François to live with Elena as lovers in François’ shabby apartment. And as old the Hollywood saying goes… hilarity ensues.

The Valet is an entertaining and amusing fluff of a film. Unlike many of Veber’s earlier films, it does not rely solely on farce and slapstick. The plot actually holds together tightly (within its own silly framework) and moves quickly. And a few of the characters, notably François, are more than one-dimensional. Gad Elmaleh is perfect in this role.

Elena, played by Alice Taglioni, is an appealing character in two senses of the word …she is a supermodel with a heart of gold and she looks luscious in every scene.

If one looks back at Francis Veber’s films, it is clear that they are dominated by male roles. In The Valet, however, Elena and François’ true love, Emile (Virginie Ledoyen) are significant female parts. They give balance to the film and make it less like Veber’s customary buddy-film genre.

Nevertheless, Kristin Scott Thomas is wasted in her clichéd role of the powerful and crafty wife. Even though the ruthless lawyer is also a clichéd part, somehow Richard Berry pulls it off. And for my taste, Daniel Auteuil is broader than he needs to be as Pierre.

Oddly, there is a character named François Pignon in many of Veber’s films. Just the name of the character is the same; the roles are very different. When asked about this, Veber said that François Pignon has become “…a kind of alter ego, a good luck charm. Knowing that Pignon is waiting in the wings makes me feel much more at ease when I start writing a script.” It was surprising and a bit daunting for me to realize that after 35 years of writing, an internationally acclaimed filmmaker would need a talisman.

There has been endless discussion about the dissimilarity between the French and American sense of humor in film comedies (Jerry Lewis comes to mind). It is enlightening to watch the French and American versions of the same Veber film and experience those differences. I prefer the French versions if for no other reason than that they are filmed in France. The Valet’s cinematography made Paris look particularly enticing.