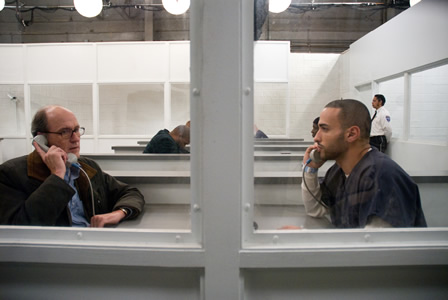 I want to live in Todd McCarthy’s universe. He created one world in The Station Agent (2003) where an unhappy dwarf, an emotionally fragile, middle aged woman, and a sweetly happy-idiot young man became cohorts. These people didn’t belong together in life or in art, but McCarthy made them vivid, funny, poignant, and their interactions immensely appealing. McCarthy’s second film has a political “message” and its characters aren’t as well-drawn or interesting. Yet he fashions another world where quirky and prickly people can connect and even come to love each other.

Sixty-two year old Walter Vale (Richard Jenkins- the deceased father in Six Feet Under) teaches economics at a liberal arts college in Connecticut. He’s alienated from his teaching and missing his concert pianist wife who died some time ago. His loneliness makes him selfish, callous, unpleasant, aloof; we would feel sad for him if he inspired even an ounce of good will. Attending a conference, he opens his seldom-used New York apartment to find a young couple has moved in- Tarek (Haaz Sleiman) a young Syrian man and his Senegalese girlfriend Zainab (Danai Guria). Victims of a real estate scam, they had been paying rent on an apartment that was not theirs to rent. With apologies, they pack their bags to leave, though they have nowhere else to go. But surprising both us and himself, Walter invites them to stay for a couple of days, until they can find new lodgings.

Tarek ekes out a living playing gigs on his African drum, while Zainab sells her hand-made jewelry on the street. They’re vital, young, passionately connected to each other, warm with everyone they meet, and they love what they are doing with their lives. In other words, they’re the antithesis of Walter. Though he allows them to stay with him, he initially keeps them at arm’s length. But he can’t resist them any more than we can, and he is drawn to Tarek’s music, finally asking for some drumming lessons. It looks like the beginning of a beautiful friendship. But Tarek and Zainab are illegal immigrants, and the plot will thicken.

McCarthy’s worlds work best when they are not encumbered with a plot. There really is none in The Station Agent, and the first half of The Visitor works wonderfully well without one. Once the immigration issues become central, the movie mostly settles into a thin, simplistic, political melodrama. Fortunately, McCarthy’s love of fresh and unusual characters can’t prevent him from introducing yet another one- Tareks mother, played by the great Palestinian actresses Hiam Abbass (The Syrian Bride).

If McCarthy is the divinity of the universe he creates, its patron saint is Frank Capra (It’s a Wonderful Life, Mr. Smith Goes to Washington, and the incomparable Mr. Deeds Goes to Town). Feminists used to say, scratch a woman, and you’ll find a feminist. The primordial truth about Capra’s and McCarthy’s characters is that if you scratch beneath the surface, just about everyone is decent. All we really desire is some kind of community and some kind of nurturing intimacy with other people. Serendipitous events place possibilities and obstacles in our paths, but if we’ll take some risks and trust in the goodness of people- then happiness really is possible.

The difference is that Capra was the greatest populist filmmaker in our canon, and McCarthy seems in over his head with the immigration question. The issues are much more complex than he wants to acknowledge. But that problem is more than compensated for by characters with whom we want to spend time. Ironically, the real “visitor” in this film is not an illegal immigrant living illegally in an apartment. Walter is the visitor- a stranger to what his life has become, a stranger to his colleagues and students, a stranger to the joy and engagement that makes life worth living. Creating this character and his journey is no small achievement and makes The Visitor a very satisfying experience.