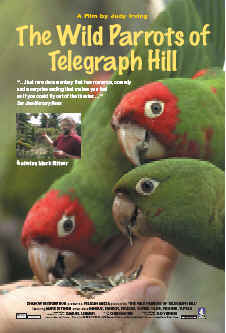 The parrots, a flock of some forty-five cherry-headed conures, are not native to San Francisco. Imported from Latin America as pets, these escaped or discarded birds have thrived, living and breeding in the wild, as it were, in Northern California. Eye-catching with their brightly colored feathers and engaging in their intelligence and playfulness, the flock has obvious appeal in its own right, not to speak of its story of survival in the urban jungle.

The birds, then, are a natural subject for a documentary film, but in the end Judy Irving’s film is as much or more about Mark Bittner, a self-appointed guardian of the flock, than it is about the birds themselves. Bittner, a pony-tailed, scruffy-bearded carryover from the 1960’s, is a gentle soul who spent the last several decades apparently doing very little–surviving on odd jobs, living on the streets. His original goal was to be a musician, but that evidently didn’t pan out. He was seeking, he says, a spiritual rather than a careerist path.

A caretaking gig in a cottage on Telegraph Hill put Bittner in residence close to a roosting place for the parrots and he began feeding them and caring for the injured and ill. Over time, he was able to distinguish the individual birds, he named them, and he observed their behaviors, maintaining a journal and then writing a memoir about the experience. Clearly, Bittner’s relationship with the flock provided a missing center in his life.

Bittner acknowledges the potential trap of anthropomorphism, of attributing to the birds the attributes of human beings; it’s a not unusual response for humans to project their own feelings onto pets or wild animals observed. That’s not only not very good science, but it also runs perilously close to cloying sentimentalism. Bittner’s acknowledgement of the issue keeps a certain balance to the film; his retreat into Buddhist philosophy is a welcome alternative.

The film meanders a bit, stretching the subject matter over its eighty-three minutes with lingering scenic shots of San Francisco and excursions into Bittner’s nearby North Beach neighborhood. Irving gratuitously injects herself into the film from time-to-time, presumably justified by the revelation in the final scene which seems just a touch self-indulgent. But the overall laid-back tone of the film and Bittner’s story are sufficiently engaging to sustain interest and discount the flaws.