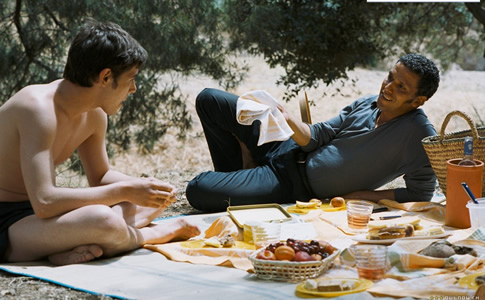 The year is 1984. The place is Paris, France. Manu is a young gay man from the country recently arrived in Paris. During the course of one year, several individuals will become involved with Manu and through him with each other. André Téchiné’s The Witnesses is typically French in its nuancing of several shades of love, and brings fresh perspective to how AIDS changed the world in the 1980s, a time that now feels like more than a mere generation ago.

As the film opens, Adrien (Michel Blanc), a fifty-something gay doctor and the emotional center of this film, is engaged in conversation with a young gay man recently arrived in Paris from the country. Manu (Johan Libéreau) is too busy cruising the park to take Adrien’s sexual overture seriously, and soon disappears into the bushes to join an orgy already in progress. Manu is precocious, adventurous, and self-assured, yet naïvely cruel in a manner typical of the new gay kid in the big city. This opening gambit, a classic meditation on patron as older lover and ingénu as younger beloved, sets an ironic stage for the unbidden, unwelcome arrival of that stranger soon to be known as SIDA (AIDS).

Meanwhile, Adrien’s friend Sarah (Emmanuelle Béart) has just had her first child with her husband Mehdi (Sami Bouajila), a Parisian vice cop of Algerian descent. Sarah, an artist and a very immature woman, has no natural affinity to children. She is frequently framed in glowing, searing, burning yellows, framed in scenes similarly saturated with yellows, from nearby flowers, drapes, fabrics, walls, as if she were somehow a part of the very fabric of her environment.

To complete the scenario, add to this mix Manu’s sister Julie (Julie Depardieu); Manu is staying with his sister in her room in a neighborhood brothel. The Paris bohemian milieu as familiar set piece allows Téchiné to insert a political history of AIDS into the narrative, and dramatize it, thereby avoiding the didactic tone and reportage-from-the-trenches quality of many earlier films dealing with the emergence of AIDS.

Various love stories unfold, at times running parallel, at times jumping tracks, physical passions refracted through increasingly deeper and muddier emotional bonds. As betrayals and alliances mutate (foreshadowing the evolution of AIDS itself), each person will soon find himself or herself an unwilling witness to the ravages that this emergent illness will come to unleash on their hearts and lives.

A highly deserving and thoroughly engrossing dramatist, Téchiné (Wild Reeds, 1994) affords himself the opportunity to reintroduce the most devastating page of the sexual history of the twentieth century to new audiences. The Witnesses makes for a timely and timeless telling of the tale of AIDS, the most political disease of modern times, and how it shattered an innocence no one knew existed until it was gone. Never polemical, frequently philosophical, occasionally saturnine, and beautifully filmed and acted, this film is a minor masterpiece, and one of the best films about AIDS to date.