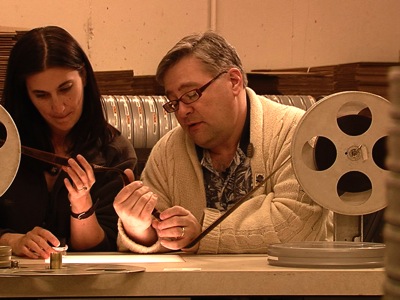 Do you remember That’s Entertainment from the 1970s, that cavalcade of clips from popular MGM movies? While being marketed as a documentary, Mariano and Norton’s These Amazing Shadows is kind of like that. It’s really a long commercial promotion for The National Film Registry, and not nearly half as fun as That’s Entertainment. It’s more like what People magazine might do with the task of pitching the project which the very serious and august National Film Registry has been appointed to undertake.

Instantly recognizable clips, in sound-bite size portions are strewed about this film, interspliced with an impressive collection of film authorities talking about films they championed to be added to the Registry. This is a education lite, explaining in Cliff Notes fashion the reasoning behind both obvious and less obvious choices of films for inclusion. The good news is the Registry has initiated an impressive cataloging of a diverse range of films (some 550 films to date), including documentaries, experimental films, industrial and commercial films, even the rare home movie (such as home movies from a Japanese interment camp during World War II, or the scenes of small-town Minnesota of a bygone era, with a feel of Edward Weston’s photographs come to life).

The National Film Preservation Act of 1988 created the National Registry to identify and preserve films of national significance, based on “culturally, historically, or aesthetically” criteria. The Library of Congress, under advisement of input from professionals and the general public, selects twenty-five films each year for this honor. In just under a quarter century the Registry has gone a long way in creating a motion-picture collective historical memory for the nation. Race relations, women in filmmaking, and propaganda, including outright risible lies told by past films are preserved here.

Movie buff and the most casual of film-goer alike will find him or herself touched from deep within, resonating personal reflections, as the most familiar clichés of cinemagraphic history appear. Awareness of the Film Registry’s excellent work is good news. Mariano and Norton’s job in telling it is, lamentably, weak—too bad they were so focused on the marketers in the room, and not the scholars and experts, whom they interviewed in the making of this film, or the cineaste, who is most likely to watch such a documentary. Or maybe, they were pitching this film to Congress, who foots the bill for the Registry’s work?