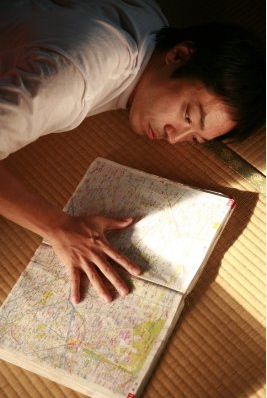 Tokyo! is three films in one, combining the whimsy and creativity of visionary directors Michel Gondry, Leos Carax and Bong Joon-ho. The movie’s namesake serves as the backdrop and inspiration for odd and disparate characters in even odder situations. In Gondry’s Interior Design, a young couple re-locates to the city’s center with the hopes that the young man can fulfill his ambition of becoming a filmmaker. In the interim the young man is even successful in getting a temporary job and winning over the affections and sympathy of his girlfriend’s friend while keeping his career dreams alive. Conversely, the young woman is vulnerable and directionless- finding herself drifting from relationships and becoming the object of a bizarre transformation.

Like all of Gondry’s works, Interior Design is quirky on an entirely different level than most American indie films, which in themselves have become somewhat predictable and cliché. Gondry manifests characterization and emotion in oddball, yet interesting idiosyncrasies. Sometimes his films require a certain mood upon entry or patience to endure, but they always illicit intrigue and appreciation on some level. Interior Design is no exception, but maybe much less or more so since it is short- at the height of its engagement and enjoyment it’s almost done, leaving you wanting more.

Maybe even more odd and funnier is the Carax entry of Merde. A mysterious and scary character that lives in the city’s sewers starts terrorizing residents with his occasional presence and destructive ways. When “the creature of the sewer” goes to extremes, he is captured, tried and convicted, arousing tremendous media attention and social outcry, both negative and positive. To the creature’s rescue is a scholarly type man from England who somehow speaks the sewer man’s language- they’re the only two in the world who do. Denis Lavant is perfect as the sewer creature, eliciting repulsion and laughs at the same time.

Last but not least is Shaking Tokyo by filmmaker Bong Joon-Ho. This entry is slower and subtler than the first two, but just as quirky in its own way. For many years the main character has been a hikikomori. Voluntarily hold up in his house, his only outside contact consists of packages from his father and seemingly daily pizzas delivered by an attractive young woman capture his attention and heart after the city experiences an earthquake. His newly shaken heart may be just the thing to finally get him out of his house to search out the delivery girl who herself has become a hikikomori.

Without being overly sentimental or overly anything, Shaking Tokyo is the most endearing of the three films- a sort of love letter to the overly crowded, claustrophobic city that can drive people in as well as bring them out. It’s a small, captivating film like I’m sure the city is in its own special way.

Unlike, it’s predecessor, Paris Je Taime, Tokyo! is not necessarily easy, romantic or crowd pleasing, it’s Gondry, Carax and Joon-Ho putting a twist on tradition and challenging the average viewer. But come to think of it, the huge crowd I viewed Tokyo! with seemed pretty pleased throughout and in the end.

If you like Tokyo!, I recommend the following movies by the these directors:

– Eternal Sunshine of the Spotless Mind (Michel Gondry- his masterpiece)

– The Host (Bong Joon-Ho)- deftly mixing horror, sci-fi and comedy in the most unusual way