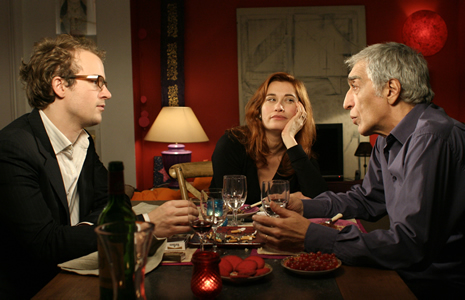 It’s so rare to see a film about a woman that is also written and directed by a woman that when one comes along, it’s cause for celebration. French actress Idit Cebula has joined the still sparsely-populated ranks of women wrier/directors with her feature film debut, a very funny and often quite poignant story of a middle-aged woman who decides to change her life, much to her family’s surprise and chagrin. It’s an accomplished and engaging first effort, and although her scope is small, Miss Cebula moves gracefully and her imagination soars within it.

Eliane (Emmanuelle Devos) is a public school teacher who lives an ordinary life with her husband and teenage daughter in a cramped but whimsically furnished apartment in Paris. A child of Polish immigrants, Eliane also dutifully submits to the tacit requirements that daughters of Jewish households traditionally inherit. She visits her widowed mother every day, and although the old lady’s burgeoning senility exasperates her, that is about the extent of any discord between them. Eliane also continues to have conversations with her father, whose ghost happily awaits her visits at the local cemetery. All in all, Eliane‘s life seems happy enough, with the help of a vivid imagination, but underneath you get the impression that she is yearning for something more. When she decides to buy a computer to organize the notebooks she’s been doodling in for years, even her husband begins to get a little suspicious.

The “Plus One” in the film’s title can mean many things, but one of the meanings it refers to is that “other life” that Eliane is yearning for. And as the title suggests, it’s not that Eliane is completely dissatisfied with her old life, or that she wants to leave it altogether, or even leave her marriage, which is actually not a bad one, as marriages go. She just wants to add to it. It’s the same with her teenage daughter, who ignores her half the time and the other half complains that her mother ignores her. “A lioness must eat first before she feeds her cubs, in order to maintain her strength,” Eliane tells her daughter. The line is meant for laughs, but it’s a refreshing take on the maternal drive for those of us mothers who suffer from massive guilt whenever we decide to put our own needs before our children’s.

The yearning inside of Eliane is that of a writer, and Miss Cebula does a good job in giving this creative desire a craftsman-like quality, so that it doesn’t feel too airy-fairy. It also makes any success that Eliane has feel authentic, like a result of real work, instead of having a bestselling novel suddenly appear out of the blue. The book Eliane eventually starts serious work on with her editor is full of illustrations as well as stories, which helps make the whole endeavor more credible. It feels like something a schoolteacher could have been working on for years during her spare time.

Director Cebula also does a fine job presenting us with a character who treads the thin line between being a faithful wife, a loving mother and dutiful daughter, and a woman who at times would rather be anything but. There’s even an attraction that develops between Eliane and her editor—a sensitive and nice-looking young man— that evolves into true intimacy, but never crosses into infidelity. Emmanuel Devos, an extraordinary actress with an ordinary beauty, plays Eliane with just the right amount of devilish mischief and stubborn assurance that makes us understand and admire her. She is only doing what every woman needs to do at some time in her life—think of herself first.

There’s a great pivotal scene in the movie that leaves us shocked as well as exuberantly happy. Eliane comes home to tell her husband she has just quit her job. Aghast, and obviously worried about money, he takes the phone and shoves it at her, yelling at her, ”You are going to call them right now and say you want your job back.” “No,” she yells back at him, and they start wrestling each other to the ground. It’s a physical fight that never loses its comic touch, but the conflict is nonetheless very real. There are no tears, no shrinking back from a husband’s tyranny, no wifely compromises to be made. It’s a fight to the finish. And guess who wins.