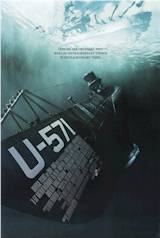 U-571 is a hybrid. While shot in color and using ample amounts of 21st century technology, it’s basically a 1940s film – one that the World War II Office of War Information would have readily approved. It’s a testosterone-fest of sweaty, gritty sailors shooting at lots of stuff and blowing things up. Its Bad Guys are uniformly and genuinely evil, its Good Guys courageous, virtuous and honorable. But ultimately even a large dose of modern Dolby sound effects and digitized pyrotechnics can’t mask a plot and acting that are both decidedly sub-standard.

Matthew McConaughey stars as Lt. Andrew Tyler, who’s just been passed over for his first submarine command, primarily on the recommendation of Lt. Commander Mike Dahlgren (Bill Paxton). Naturally, within five minutes of getting the bad news, Tyler is tapped for an Important Secret Mission and forced to serve as Dahlgren’s First Officer. The German submarine U-571 has been disabled in the North Atlantic and US Military Intelligence has decided that Dahlgren and Tyler will disguise their sub as a German vessel and head for U-571, posing as a rescue and support ship. Their mission: to capture the Enigma code machine that the German military uses to encrypt their radio transmissions.

In writer/director Jonathan Mostow’s previous film (Breakdown) he used a relatively standard scenario but introduced enough plot twists, energy and interesting characterizations to raise the film above potboiler status. In U-571 he’s strictly painting by the numbers. The action proceeds as a series of set pieces – lots of gunfire and explosions, some supplied via digitized effects that are surprisingly cheesy. And since this is a submarine movie, suspense is supplied via several scenes of the huddled crew waiting in silent anguish as depth charges drop, followed by the requisite flying sparks, erupting fires, creaking bulkheads, breaking gauges, and gushing water.

Even by Generic Combat Movie standards, the dialog is laughably clunky. Lines like "We’ll be dead as a depth charge." and "She’s old, but she’ll hold!" are trotted out without shame, mostly by Harvey Keitel as Chief Klough. A just-married Ensign exclaims, "The Navy didn&#146;t even give me five minutes to consummate my marriage!" &#150; no doubt what the average 19-year-old in 1943 would have said if cheated out of a honeymoon. The performances are unremarkable, and McConaughey manages to wring every last vestige of personality from his portrayal of Tyler. Under stress he goes slackjawed, vacant-eyed, and drops his voice so far down into a toneless glottal fry it appears that he’s trying to channel Tobey Maguire on Quaaludes.

One of the larger problems with the film is the virtual anonymity of most of its characters &#150; it’s hard to care about any of the participants when, aside from the major players, everyone else merely fits into standard combat film stereotypes. There’s the wet-behind-the-ears innocent, a snotty street punk, a top brass idea guy who’s forced into acts of bravery, a grizzled old crew chief. However, the Humble Country Boy Playing Harmonica was noticeably absent. A major battle scene (when the US sub finally reaches the U-571) is confusing and therefore punchless – both sides in the close-quarters fight are wearing black rain slickers over German uniforms and it’s impossible to tell who’s shooting at whom.

U-571 takes liberties with both historical and technical accuracy. A few paragraphs in the closing credits note that it was in fact British sailors on surface ships that captured the first Enigma machine. And one crucial plot point revolves around trying to start and run the sub’s diesel engine while the boat is underwater, something that would be impossible if below snorkel depth. But the biggest failing of U-571 is that we’ve seen most of it before, in better films like Das Boot, Run Silent Run Deep, and Destination Tokyo. By comparison, U-571 doesn&#146;t hold water.