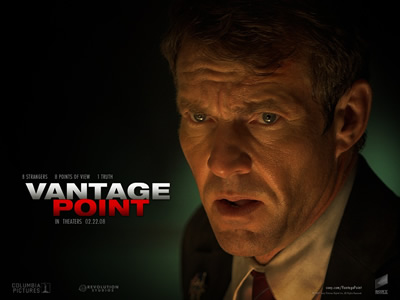 Vantage Point is a smart film with a complex plot and lots of action. That’s not a typical combination. The movie takes a mundane thriller plot—terrorists attempt to assassinate the president of the United States while he speaks in a crowded plaza—and turns it into a Hollywood version of Rashomon (1950).

Dennis Quaid (Far From Heaven, The Rookie, Traffic) stars as the rather one-dimensional Thomas Barnes, a Secret Service agent, who after taking a bullet for the president the year before, is now warily resuming his guarding duties. The earnest President Aston, in Spain to attend a world anti-terrorism summit, is played by William Hurt (A History of Violence, Into the Wild). Matthew Fox (Lost, We are Marshall) ably takes the part of Barnes’ Secret Service partner.

Sigourney Weaver (Alien, Gorillas in the Mist, Snow Cake) shines in her modest role as a tough American TV news producer. Forest Whitaker (Last King of Scotland, American Gun, The Shield) believably plays a sentimental American tourist in the crowd, who while innocently videotaping the event, gets involved in the action.

In the first part of Vantage Point, the nerve-racking minutes before, during and immediately after the assassination attempt are repeated six times. Each time we are shown the unique viewpoint of one of the witnesses, each of whom observes and takes part in different aspects of the attempt and its frenzied aftermath.

For example, the TV news producer only sees what her newscasters report and the news cameras reveal, long shots or close-ups suitable for TV news. But when we see the scene from Thomas Barnes’ perspective, we see and hear agitated throngs of people overcrowding the plaza and pan through them as a Secret Service agent would, looking for trouble.

There is some subtle acting here, as each person appears slightly differently in the others’ eyes, although his or her lines don’t change. Each vignette cliff-hangs, ending just before a key element of the story would be revealed.

After the vignettes end, the rest of the film is a bit more ordinary, but has adrenalin rushing action and suspense. The chase scenes are very fast and enhanced by terrific quick camera work, but they don’t quite mesh with the earlier Rashomon-like section of the film.

By the very end of Vantage Point, we finally understand the true interconnection of the eight individuals and the full extent and complexity of the assassination plot, although the terrorists’ motivations remain unclear. The pieces of the puzzle finally fit together for the audience, although they may never have come together for the participants.

Barry L. Levy is to be congratulated for this, his first produced screenplay. Pete Travis’s quick-cut direction (Omagh) helps to maintain the sometimes chaotic pace of the film. The movie benefits greatly from its array of familiar Hollywood stars, and its less known, but charismatic young American and international actors, Edgar Ramirez (The Bourne Ultimatum), Zoe Saldana, Ayelet Zurer (Munich) and Sa?d Taghmaoui (The Kite Runner, Three Kings).

Vantage Point isn’t preachy or political. It takes a climactic event, and in presenting it from differing perspectives, adds both complexity and realism to it. It’s an intriguing film for those of us who enjoy the combination of the intellectual exercise of puzzles and the visceral sensations of action-thriller movies.