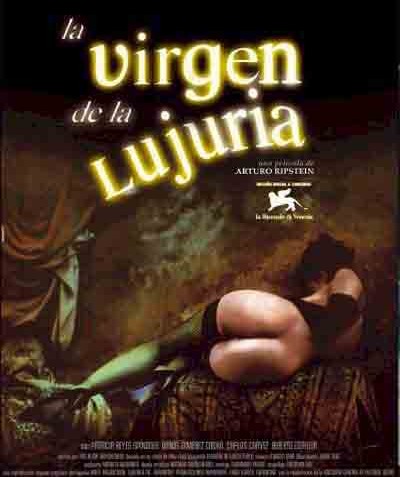 Virgin of Lust is a complex, multileveled film from veteran director Arturo Ripstein (Such is Life, No One Writes to the Colonel). It’s very different from the character-based stories about the Mexican underclass which have been the norm in his other films exhibited here, but that observation is made with a caveat–since Ripstein’s films inexplicably fail to attract North American distributors, seeing them is a matter of the chancy good fortune of catching festival screenings.

Virgin of Lust centers on political themes of colonialism, classism, and revolution, couching them in the form of a parable utilizing melodramatic conventions of film noir and opera. Much of it takes place in the art deco Cafe Ofelia in Vera Cruz of the 1940’s, filmed in saturated tones of ochres and browns, with other colors largely bled out–the movie has the look of an old sepia photograph.

The owner of the cafe, Nacho’s boss, Don Lazaro (Julian Pastor), berates him and calls him names like "half-breed." Don Lazaro, though born in Mexico, asserts his Spanish lineage and is a supporter of Franco. Ripstein allows the character a kinder side as well; his relationship with Nacho (master/servant; colonialist/native) involves a degree of trust, perhaps even affection.

Enter Lola (Ariadna Gil), a beautiful, opium-addicted, heavy-drinking hooker who is carrying a torch for Gardenia Wilson (Alberto Estrella), a masked professional wrestler who has used her and cast her off. Her passion for Wilson is a totally sexual one, but he cannot abide her clingy neediness. Lola goes beyond amoral; she wallows in her addictions and she’s assertive in her independence; she also longs for another life, one in which she would be free of her demons. Nacho falls hard for her, but she’s not interested in love-making with him; their relationship becomes a sexless, teasing, sado-masochistic affair, Nacho willingly submitting to the humiliations to which Lola subjects him (and later getting off by fetishizing her lace glove). Lola feels trapped by Nacho’s love, just as Gardenia feels trapped by hers.

Also hanging out at the cafe are a group of Spanish Republicans; the civil war has been lost and Franco is in power. Constantly bickering among themselves, they plot to kill Franco, leading Nacho to fantasize about killing Franco himself, not so much for political reasons as a way of establishing himself as a hero, as someone of importance worthy of being loved by Lola. One of the Republicans, Gimeno (Juan Diego), calls himself Mikado; he’s a photographer who is shooting a series of tableaus of revolutionary scenes, fromSpartacus to the French Revolution. (Gardenia is one of his models.) He also dabbles in porn for the money.

Ripstein opens his film with a series of short scenes, accompanied by action or dialogue titles in graphic styles that call to mind movie trailers of the 40’s. He uses the titles again at the conclusion (prior to the plain credits). From time to time during the film he has his characters burst into song, more operetta-like than operatic. Lola at various times makes claims to being a Russian countess, a revolutionary, a circus star. There’s a black-and-white sequence showing Nacho’s dream of Lola becoming his slave, a role reversal.

Virgin of Lust, then, is a highly stylized fantasia on themes of power. Taking a cue from his apprenticeship with Bunuel and layering it with a Mexican political sensibility, Ripstein demonstrates here a new level of vision and accomplishment. In creating this elaborate entanglement of roles with multiple, idiosyncratic dramatic devices, he has left behind, at least for the moment, gritty neo-realist drama, creating a grandly-scaled allegory that is at once fascinating, captivating, and utterly audacious.