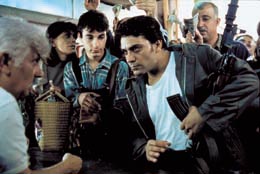 Ziad Doueiri worked as a cameraman in a dozen films, including Quentin Tarantino’s hits Pulp Fiction and Reservoir Dogs. But his debut film as writer/director, West Beirut, is an original, all his own and straight from the heart. A story of coming of age in Beirut in 1975, at the beginning of the civil war that ripped apart a city of three million for seventeen years, West Beirut shares a wealth of perceptive observation that knits together into a moving memoir.

The film centers on Tarek, a student at the French High School of Beirut, played by Doueiri’s younger brother, Rami, in his first acting assignment. It was an inspired casting choice. Rami is a charmer on the screen, displaying a remarkable level of confidence. He creates a rounded and in-depth portrait of youth, conveying boyish mischievousness and street smarts, teen age rebellion, a loving nature, and an underlying vulnerability.

In an opening sequence, Tarek uses a bull horn to drown out a school assembly, substituting a Lebanese song for the French song underway. Immediately Doueiri establishes not only the humorous audaciousness of the young hero, but the political context of a colonial country with complex history and tangled roots. French, Arab, Muslim, Christian – Beirut is a seething confusion of cultural and religious conflict, all too easily denied by Tarek’s father as the conflict of the Syrians and the Israelis.

Doueiri follows Tarek, his good buddy Omar, and a beautiful young girl, May – a Christian Arab – as they cope with their families and grow up fast, the war erupting into the texture of their day-to-day lives. Waking up to gunfire and bombs replaces waking up to the crowing of a rooster and the daily raging temper of a harridan neighbor.

The film is rich in detail: the quick entrepreneurship of street vendors selling glass after bombs have fallen and blown out windows; the kids marching and enthusiastically chanting in a demonstration without knowing who it is they are cheering on; the loving marriage between Tarek’s parents and the pressures of growing hardship on their relationship. A brassiere flying from the radio antenna of a car is the signal that protects on a trip though no-man’s-land. In a sequence in a whore house, the madame discovers that she can’t keep her territory neutral. "Since when does a bed have a religion?" she wails.

With each bit of accumulated experience, Tarek’s bountiful supply of enthusiasm and optimism is tested and the normal challenges of adolescence are amplified in the midst of urban civil war.

Through his observational skills and the remarkable performances elicited from his young actors, Doueiri has created a fresh and unaffected film that portrays the survival of individual humanity in the midst of anarchy, the strength of loving relationships under the strains of deprivation and uncertainty. He in no way downplays the human costs, but Doueiri/Tarek survives – emotionally and spiritually tested, but whole, nonetheless.