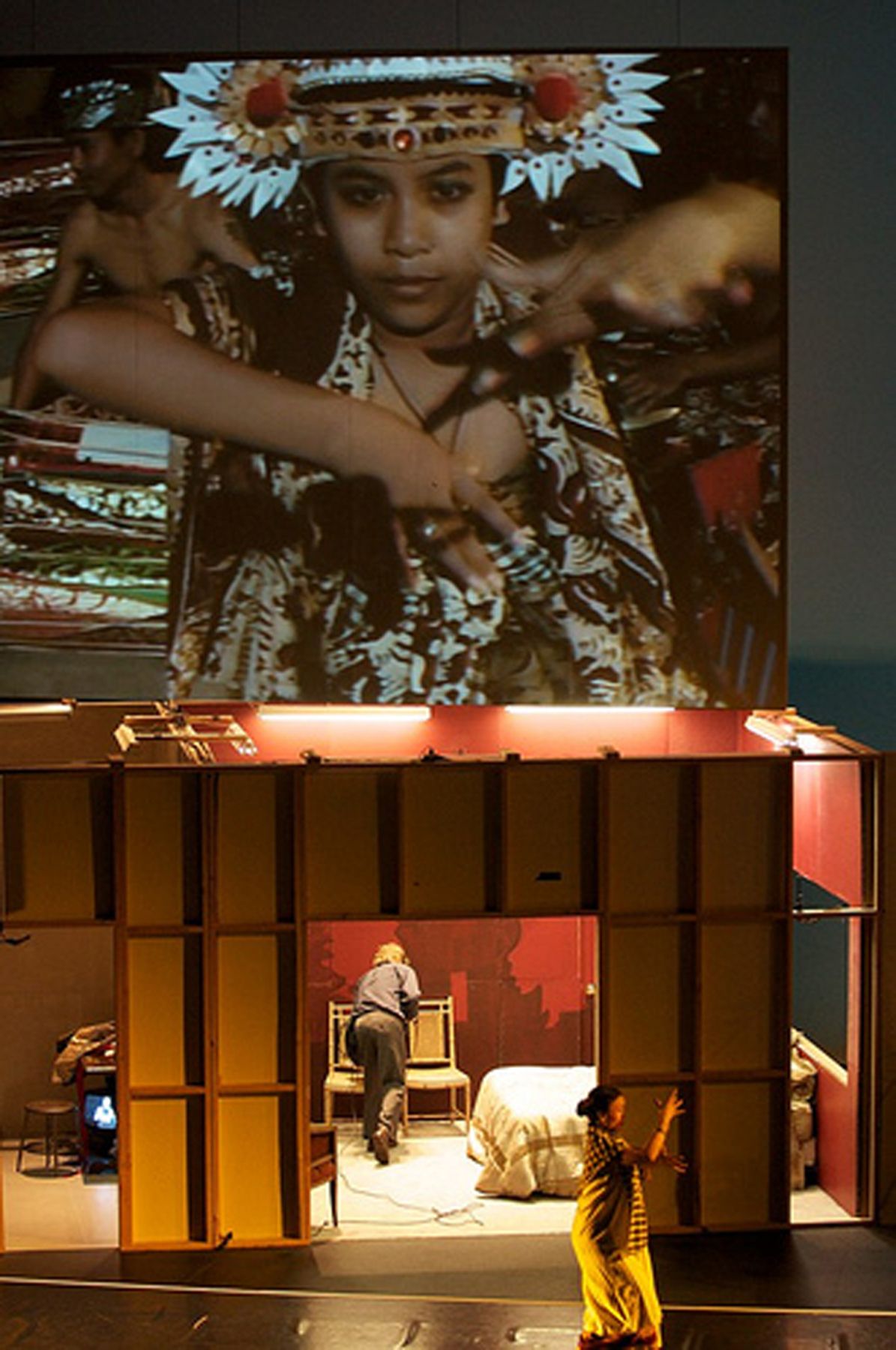 A House in Bali

Music by Evan Ziporyn
Libretto by Paul Schick after Colin McPhee’s “A House in Bali”
Choreography by Kadek Dewi Aryani and I Nyoman Catra
Directed by Jay Scheib
Brooklyn Academy of Music
Oct. 14-16, 2010

“A House in Bali” is one of those multidisciplinary, cross-cultural performance events that festivals love to present, especially the Brooklyn Academy of Music’s Next Wave Festival. When they work, they can be dazzling and revelatory. But all too often, what looks good on a grant proposal comes across onstage as lumpy and ill-digested. “A House in Bali” takes as its subject the culture clash between three Western artists – Canadian composer and music scholar Colin McPhee, American ethnographer Margaret Mead, and German painter Walter Spies – and the Balinese culture they trample over in the guise of celebrating and preserving it. And the show itself is a giant train wreck where opera, new music, contemporary theater, and Balinese gamelan collide. No one survives unscathed.

As a college student, Ziporyn was understandably entranced by the wild, clangorous, hypnotic sound of Balinese gamelan as recorded on a famous Nonesuch album called “Music from the Morning of the World.” Making pilgrimages to Bali inevitably brought him in contact with McPhee’s memoir “A House in Bali,” which for locals and travelers alike has served as a primary introduction to the enchanted island much as Isak Dinesen’s “Out of Africa” introduced Kenya to Western readers. (Or at least that used to be the case – I suspect that Elizabeth Gilbert’s “Eat Pray Love” has usurped that role nowadays.) He had librettist Paul Schick adapt the book for three singers with very traditional operatic voices – tenor Peter Tantsits as McPhee, soprano Anne Harley as Mead, and tenor Timur Bekbosunov as Spies, fine singers all – and wrote a score to be played by the new music ensemble Bang on a Can All-Stars (with which Ziporyn has performed since 1992) and Gamelan Salukat (founded in 2007 by young Balinese musicians in Pengosekan Village). There are a few moments when the Bang on a Can ensemble provides some lovely underscoring, and a few minutes when the gamelan gets to do its lively, rowdy thing with astonishing precision. But most of the time these elements are all jammed together, and the results sound agitated and ugly.

The story loosely strings together episodes from McPhee’s memoir. Smitten with gamelan (“sunny music in open air”) in contrast to the “torpid and mechanical” new music in Paris concert halls (“the endless legato of violins”), McPhee hires some locals to build a house to his specifications, in violation of village spiritual laws, and suffers the consequences of his ignorance. Watching some kids bathe in a river, he becomes fixated on one unruly boy and becomes his patron, supporting his family and his training as a dancer. (That McPhee’s interest in the boy was erotic is not apparently mentioned in the memoir, but it’s hinted at onstage and made explicit in the program notes.) Then evil spirits invade, and he decides to leave: “I will always be an outsider. The meaning eludes me.”

Around the two clusters of onstage musicians, Boston-based director Jay Scheib stages the show with European-style flash. The titular structure appears in the form of a two-room edifice that is built up and torn down in the course of the opera, and two screens stream continuously with vintage films of Balinese dancers (some of it shot by McPhee) and live video captured by a cameraman visible to the audience who follows the performers around. The video keeps the visual field lively, but then there are long stretches where the performers have to mug and mime and vamp through tiny bits of dramatic action to cover passages of musical repetition, an opera convention that produces theatrical inertness. And Scheib’s staging perpetuates the colonialism that the piece seems intent on critiquing by treating the Balinese performers as all-purpose natives, undifferentiated others. The performers playing Sampih and his parents (a real family: Desak Madé Suarti Laksmi, I Nyoman Catra, and their 13-year-old son, Nyoman Triyana Usadhi) have names and a few lines of dialogue, the guys in the gamelan have neither but have to run around the stage grinning and dancing like monkeys. They’re nameless functionaries the way many choruses are in opera; nevertheless, the Bang on a Can orchestra members aren’t required to leave their music stands and play tourists with backpacks and guidebooks.

After two intermissionless acts centered on McPhee, I found myself intrigued by the epilogue, which suddenly veered into cryptic scenes (a twitchy witch dance, a mother-and-son interaction repeated a dozen times) as seemingly random as the gnomic pronouncements by Mead (taken from her study “Balinese Character”) that close the show: “Small errors are matters of embarrassment and may lead to misfortune supernaturally sent… The house of the other is not entered lightly… All this is lived through until vacancy and awayness supercede.” I might have found this evocative and poetic if the accompanying music hadn’t been so unbearably unpretty.