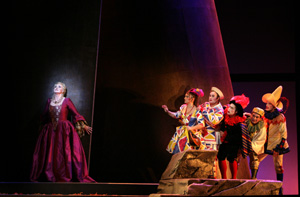 Transformation is the focus of Richard Strauss’ Ariadne auf Naxos and Chris Alexander’s Washington National Opera production of this giddy hard-to-categorize work. The storyline involves a play within a play. The music is tonal, which in its day ran counter to the prevailing style of dissonance, not to mention the mélange of musical styles that spoofs the foundation of opera. Alexander’s production then sets Strauss’ version two, which premiered 1916 in Vienna, in a current-day timeframe.

The original version of Ariadne, a one-act that premiered in 1912, was meant to follow a German version of Molière’s Le Bourgeois Gentilhomme. In a prologue set in Strauss’ Vienna, the second version, which is part of current-day opera repertoire, sets up the one-act opera that draws from Greek mythology. Alexander has transferred the setting of the prologue from a rich man’s Viennese palace to a wealthy American’s and this American has an art gallery in his home.

When the Kennedy Center Opera House curtain went up October 28, 2009, the audience saw bass-baritone Gidon Saks as the Music Teacher rehearsing the orchestra that will premiere his student’s new work, a one-act set on the desert island of Naxos where Theseus has abandoned Ariadne. Because the Music Teacher plays to the WNO orchestra pit and the audience beyond the pit, the viewing audience is taken off balance as if the assembled viewers have been unwittingly drawn into participating in the show. From this follows an argument between the Music Teacher and the Major Domo (Georg Martin Bode in a spoken role) who announces that the master of the house has decided that the opera “Ariadne auf Naxos” will be combined with the lowbrow “The Fickle Zerbinetta and Her Four True Lovers” so that the fireworks can start on time at 9 pm.

While the antics portrayed in the Prologue are funny, this part of Strauss’ opera tends to be static and talky. What saved the Prologue were outstanding vocal performances by Kristine Jepson and Lyubov Petrova.

The second half of Ariadne auf Naxos contains the best music of Strauss’ opera. While soprano Iréne Theorin as the bereft Ariadne performs well, Petrova steals the show with her agile vocal gymnastics. Probably Strauss meant this to be—that Zerbinetta, a lowly comedic star upstages the overly fraught diva Ariadne.

Act II also provides the best scenery and the WNO production features the original set from the Seattle Opera where Alexander’s production originated. As stated, the setting is an art gallery in a big estate house. Guests sit in chairs on either side of cylindrical tower that serves as Ariadne’s cave. At one point when an over-sized grand piano has been placed in front of the cave and Zerbinetta is lounging belly down and pulling herself toward the pianist, this reviewer “saw” the cave as naked thighs that suggest Zerbinetta’s coquettishly upturned legs.

While Ariadne auf Naxos is not a perfectly formed opera, the transformations made both by Strauss and director Chris Alexander helped make the net effect of the WNO production a worthwhile night at the theater.