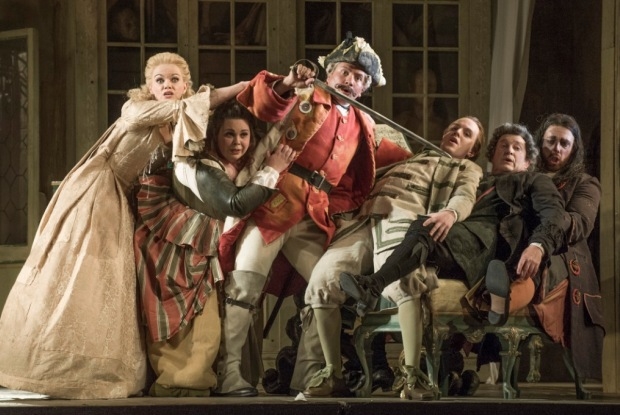 The second production of the ENO’s new season, shown on the same week as “Lady Macbeth of Mtsensk,” is Jonathan Miller’s twelve revival of “The Barber of Seville.” It is Rossini’s most celebrated comic opera based on the play written by French playwright Beaumarchais; its sequel “The Marriage of Figaro” was composed later on by Mozart. Revival director Peter Relton has served up a timeless classic in a delightful silver platter with a vivacious and lively cast. It is so hilarious that some audiences may cry.

It has been thirty years since Miller first introduced the opera and as someone who hasn’t seen the production before it proves how some revivals do succeed. The smart 17th century styled stage design of Seville, by Tanya McCallin, with traditional costumes and wigs are a visual pleasure – it is possible that Rossini saw his opera performed in a similar way in the 1816, when it premiered in Rome.
The comedy of surprise, love and deception watches Figaro assist Count Almaviva win the hand of Dr Bartolo’s ward Rosina. In order for the Count to get close to her he disguises himself as Lindoro, and other strange characters, but his mission is fraught with silly catastrophes. Relton instills the bizarreness of Beaumarchais’s comedy – once called “The Useless Precaution” – and keeps it fresh and entertaining as Miller intended.

Musically fast, quick witted and filled with both arias and recitatives, rising conductor Christopher Allen doesn’t fail to bring the best of Rossini’s music to light. On the opening night, he offered a bright and spirited interpretation of the overture while the ENO orchestra followed through with energy until the very end. However, at times, there was an issue with the volume; some moments seemed louder than others and drowned out the soloists.

Mexican tenor Eleazar Rodriguez makes his debut at the ENO demonstrating his forte in singing in different disguises. As the charming and passionate Count Almaviva his timber is refined which is strong in ‘Ecco, ridente in cielo’, serenading Rosina from outside her window. While in Act II, he pretends to be Don Basillio’s assistant and does a great job of retaining the humourous momentum with Dr Bartolo and his ridiculous antics.

Australian baritone Morgan Pearse seems less of a comedy character but helps move the opera along as the Count’s sidekick Figaro. His version of ‘Largo al factotum’, or ‘Figaro, yes, Figaro, no’ as one might know it, is confidently sung, nicely paced and delivered to the audience’s satisfaction yet it left out a spark of panache.

Mezzo soprano Kathryn Rudge was stunning on stage and sung ‘Una voce poco fa’ with flare with her unflagging vocal tenacity. Bass singer Barnaby Rea as the double-crossing music-maker wears an oddly shaped hat that nearly knocks out Dr Bartolo. He was excellently casted for the role just like Andrew Shore as the cankerous curmudgeon Dr Bartolo yet he seems to dominate the show.

Deliberate or not, Shore’s slapstick and shaving cream frolics works wonders; he had numerous one-liners that made the audiences cackle, from dreaming he had fell out of tree to saying soprano were men in his day. Here is a guaranteed spectacular opera that is bound to make opera aficionados and novices laugh.