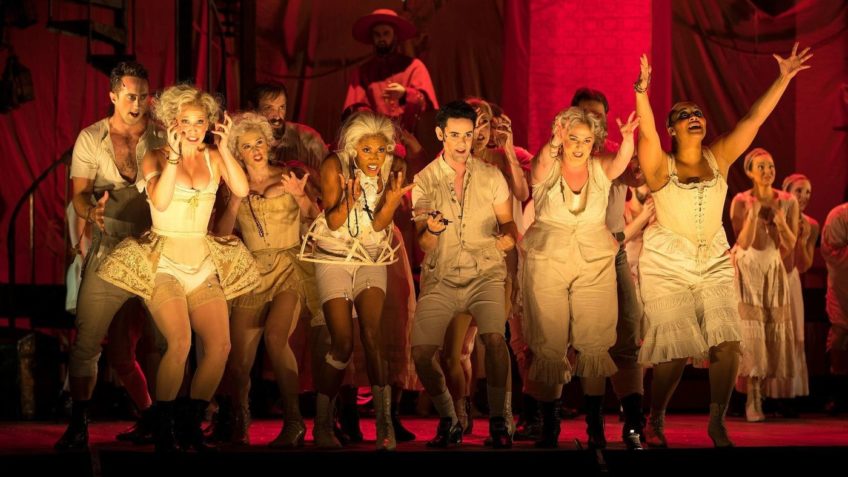 The Candide credits make it look like opera designed by a committee. But what a committee. It didn’t start that way. Lillian Hellman, in high dudgeon over the early activities of the McCarthy Committee and its followers, approached Bernstein with a proposal to create a critical theater piece based on Voltaire’s Candide. Leonard Bernstein agreed, having had his own scrapes with the FBI and the Committee. Their collaboration was performed in 1956. Although you can still hear a recording of this marvelous original version, starring Barbara Cook, it can no longer be produced, Ms. Hellman saw to that.

The first production was not a success, closing in less than two months. Listening to that recording now, it is brilliant, clean and witty. But one can imagine that a conformist ’50’s audience was not ready for this mixture of high and low culture. Bernstein himself yearned to be taken seriously as an operatic composer. Over the next 35 years he worked and reworked the score and libretto, adhering increasingly to Voltaire’s overly complex tale, bringing on board multiple additional collaborators, and creating a more operatic product. He worked on Candide until his death.

You may have seen Candide before, but which production? It matters, because listening to the original cast album and attending the current, Royal National Theatre Version, LA Opera production at the Chandler (and there are a number of other versions in between) can lead one to ask are these really the same thing? To which I can only answer yes and no.

The LA Opera has fielded an excellent cast, not an easy task for a three-hour production that requires as much physicality as vocal agility. Jack Swanson is a remarkably believable, youthful and naïve Candide. Similarly, Erin Morley sparkles as Cunegonde. The ensemble includes a level and quantity of dance not generally seen on an opera stage. Kelsey Grammer (Voltaire and Pangloss) did a very serviceable job in his mostly spoken role; and Christine Ebersole (The Old Lady) fit easily into the operatic framework.

We can still debate, is Candide an opera? Does it matter? The music is marvelous and James Conlon, as usual, does it justice. The more iterations (and collaborations) Bernstein went through, the more the story adhered to Voltaire’s original, and the more operatic the work became. Is this a good or a bad? Probably it is a matter of personal taste; my vote would say the story has so many twists and turns the original message Bernstein and Hellman sought to deliver is lost in operatic silliness. Then we get to the operatic no no: never amplify voices. The slight amplification by Sound Designer, Kai Harada was subtle enough to be unobvious, yet almost every word could be understood in the cavernous Chandler auditorium, a true pleasure given an English libretto. I am not a fan of amplification, but I wish more sound designers would get the message that amplification can be an enhancement, not sledge hammer.

As much as I may lament not having seen the original production … I was a little young … the current production is definitely a must-see. That may be a bit of a challenge since the planned run was almost sold out. Another performance has been added. Why miss it? And why not download the original cast album and make your own comparisons?