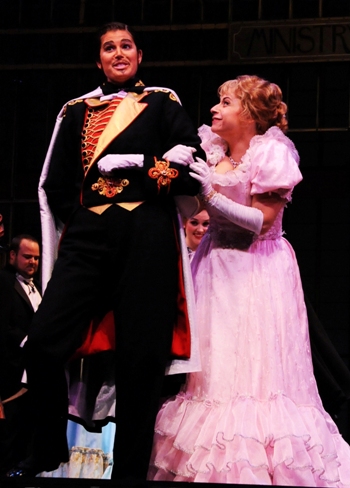 Do I hear a waltz? Well you will, too — lots of them, as well as polkas, galops and all sorts of catchy tunes — if you hurry over to Opera San Jose’s frothy holiday (albeit early) confection, Johann Strauss’ “Die Fledermaus.” As bubbly as the champagne that is consistently quaffed, this is as professional, fine and fun a production as I’ve seen, well-sung, well-paced, lovely to look at and funny to boot. If it wasn’t such a long drive, I’d go and see it again.

High spirits are evident from the first notes of the famed Overture, beautifully rendered by the orchestra under David Rohrbaugh with none of the oompah pah that can creep into a Strauss melody if you’re not careful. When the curtain rises on an elegant Viennese art deco set (Charlie Smith, designer), we’re well-prepared for the tale of extra-marital hi-jinks and mistaken identity that will unfold in Act I and, well-watered with alcohol, positively blossom in Act II. The main protagonists in this little family saga are the banker Gabriel von Eisenstein (a robust Alexander Boyer), his beautiful young wife Rosalinda (Cecilia Violetta López) and her former lover Alfred (Michael Dailey, in a clever send-up of an Italian tenor), their maid, Adele (Elisabeth Russ), the warden of the prison where Eisenstein is sentenced to reside for eight days (he goes to a party instead), played by Isaiah Musik-Ayala, and the family friend Falke (Jo Vincent Parks), who sets the whole thing in motion as payback for a practical joke.

They all sing beautifully, act well and have a wonderful time doing it — with the exception of Russ, who tries to make up for her rather thin coloratura by hamming up the part of the errant maid, out for a night on the town. But as rich and full as López’s creamy soprano is (disguised as a Hungarian countess, she sings a killer Czardas), vocal honors for the night go to Rebecca Krouner in the pants role of Prince Orlovsky, the host of the gala in Act II. She is a positive delight in a part that, in other hands, can seem as boring as the life the prince complains of leading.

Stage director Marc Jacobs keeps them all moving (and drunkenly reeling) smartly and has cut some of the fat that can make this operetta overlong. Having the singers render the dialogue in English while singing in German enables the audience to understand the jokes. He also makes Dr. Falke a Viennese psychiatrist, transforming him into a more interesting character than usual. Choreography, by Robyn Tribuzi, is clever — even for some of the non-dancers in the cast — and Cathleen Edwards’ fin-de-siècle costumes are positively gorgeous. The chorus of party-goers, directed by Andrew Whitfield, is superb. Altogether, this “Fledermaus” can (and does) stand with the best. And I’ll drink to that.