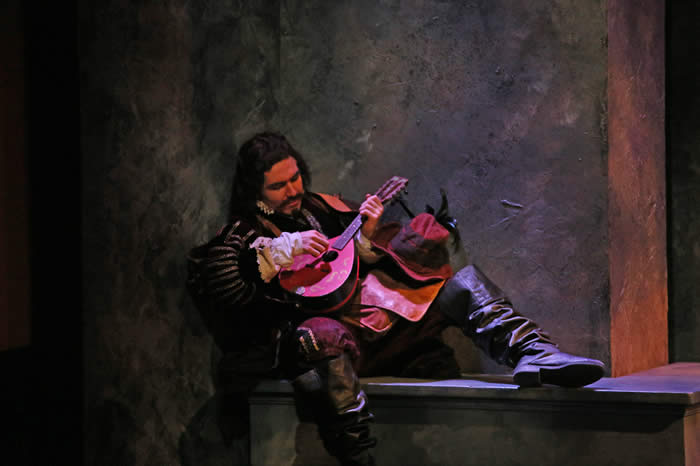 The Academy of Vocal Arts’ mounts Mozart’s “Don Giovanni” every few years and it always seems to show them at their best. Their 2011 production, directed by the Tito Capobianco, and had the lusty Don Giovanni, in flagrante delicate all during the overture in just his breeches as he pretends to be Donna Anna’s fiancé Octavio. In their current production, director Jeffrey Buchman chose to be more discreet until later, but all of the lustiness was rendered by the orchestra alone in maestro Christofer Macatsoris vibrant interpretation conjures nothing less than glorious Mozart.

Macatsoris accents the darker themes right, the clamor of the first scene, an attempted rape and a death, seemed a bit too clamorously paced.   When Donna Anna discovers the ruse and her father the Commendatore comes on the scene to challenge Giovanni to a duel. And Octavio, who resembles Giovanni, adding to the confusion as DG and Leporello steal away.

Meanwhile, Elvira, just jilted by Giovanni, chases him in anguish, but realizes what a philandering cur he is, after Leporello shows her the log of his many trysts (1003 in Spain alone). While nearby, Giovanni happens on the wedding of Zerlina and Masetto. He lures the party to his, and seduces the bride right under Maestro jealous nose.

The mob turns on him, but not before he sets off on a new round of dalliances and deceptions. He tries to win Elvira back by having Leporello stand in for him while she pines on her balcony. It’s all a ruse though to throw his pursuers off his scent. Things come to a head as he hides in the graveyard and the specter of the Commendatore gets his revenge on the doomed Giovanni.

The opera is a great barometer of AVA’s roster of singers in its vocal demands and to test their acting chops with equal parts drama and comedy. Soprano Vanessa Vasquez’s Donna Anna and her fiancé Octavio, sung by tenor Jonas Hacker have charming low-key chemistry in their scenes together, but it is in their solos toward the end that they triumph. Hacker nails the lengthy sung soliloquy in the final act. Two breakout performances by baritone Jorge Espino and mezzo-soprano Allegra Di Vita as Masetto and Zerlina. Espino conveying his jealousy with humorous gravitas. Di Vita so vocally powerful and a fine comic actress playing a gorgeous flirt.

Stellar performance by Anush Avetisyan as Elvira. She conveys every emotion as she goes from rage against Don Gio to giving in to his charms. Bass-baritones Andre Courville and Daniel Nayola as Leperello and Don Giovanni, sustain balance, and vocal clarity, with sardonic wit, in two of the most demanding vocal roles in all of opera. And the chilling finale of the stony presence out of the graveyard to exact Don Giovanni’s mortal damnation is sung with engulfing basso gravitas by Anthony Schneider.

Director Buchman opening scenes could use some streamlining, but he keeps the cast in motion throughout and uses the tight space at the Warden Theater to maximum effect. Peter Harrison’s set of modular grey panels frame Val Starr costume design of velvet doublets, plumed hats and breeches on the men and Versailles gowns on the women, seems in moments like an animated Renaissance painting.

Macatsoris’ and the AVA orchestra is a separate review and the intimate AVA Helen Corning Warden Theater a perfect venue to hear this orchestra’s dimension and detailing. Among the standout players’, the harpsichord continuo by Richard A Raub and first violin lines of Igor Szwec, essaying lustrous Mozart. Not to mention the voluptuous counterpoint lower strings by cellists Vivian Barton Dozor and Lynee Beiler.