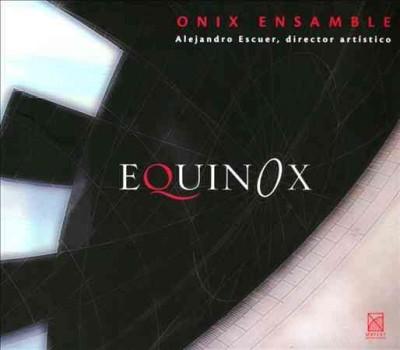 Alejandro Escuer’s Mexico City-based quintet Onix Ensamble —  Escuer, flute; Fernando Dominguez, clarinet; Edith Ruiz, piano; Abel Romero, violin; Edgardo Espinosa, cello — turns 20 this year when just surviving in the new music world is a major achievement. I’ve followed their work since I wrote up 2 of their CDs for www.classical-music-review.org. Those CDs contained the work of Latin American composers but Onix’s repertoire also encompasses the work of modernist masters like Bartok, Stravinsky, and Martinu. But we need to remember that Europe isn’t the only game in town though it never tires of trying to convince us that it is. Yet after 2 massively destructive world wars and endless colonial adventures
which of course included Mexico, we have EQUINOX which proves that there’s lots more going on south of our mutual border than cartel killings, kidnappings, and disappearances. The 4 works here by 2 Mexicans, 1 Costa Rican, and 1 American are completely individual in style. They also bear out Garcia Lorca’s assertion that ” all that has dark sounds has duende ( italics ) ” which for him meant everything from Bach to cante jondo ( itals ).

” El Aguila Bicefala ” ( Double-Headed Eagle ) — 2005 — by Mexican composer Gabriela Ortiz ( b. 1964 – ) is a prime example of her style which is characterized by quickly changing meters — 7/8; 8/8; 7/8; 8/8; 5/8 in the first 5 bars and is marked ” sempre ritmico e con vigore ” — with dramatically changing colors and virtuosic writing for the ensemble and each of the 5 players. It’s intricate but purposeful, subtle yet clear, even mysterious. Ortiz has always been a composer with a strikingly individual voice and this piece should bring new listeners to her work, and whet their appetite for more.

” Musica para Cinco ” ( 2009) by Mexican composer Samuel Zyman ( b.1956 — ) sounds more indebted to Schoenberg’s 12-note method than to jazz despite Zyman’s program note where he stresses its ” general jazz character “. He also seems to tip his hat to the Viennese master when he says his score is for the “Pierrot” line-up, which of course means Onix’s flute, clarinet, violin, cello, piano. “Musica para Cinco ” also has something of the feel of a Schoenberg march but it’s not doggedly insistent as so often with him, but vigorous, colorful and very imaginative with surprises at every turn, and Onix makes all of its facets shine.

“Zachic 4 ” (2006) by Costa Rican composer Alejandro Cardona ( b. 1959– ), which uses Aztec-like materials, is equally well-made, but sounds more instinctive, more extreme, and definitely more exciting, from its expansive floating in time opening song for alto flute, bass clarinet, cello and violin, through its successive three movement lay-out. The “static” opening of its third movement sounds a bit like “Farben” ( Colors ) from Schoenberg’s great and deeply influential Funf Orchesterstucke (1909). Its second movement is full of Stravinsky-like stamping rhythms, and there’s a rapid, wonderfully demented clarinet figure accentuated by the flute above, which gets reprised in the final movement.

“Kukulcan II ” (2007), by American composer David Dzubay ( b.1964- ) uses indigenous-sounding Aztec material – for his own expressive ends. Its textures are clean and open; and like many composers before him — Berlioz most famously in his Symphonie Fantastique — Dzubay uses the Latin chant “Dies Irae ” ( Day of Wrath ) evocatively. His writing here is also generally more linear than the other three composers on “Equinox” , and he uses dramatic cut-offs, which keeps the audience, as in a film or stage score, on edge, expecting , wanting more.
“Denibee”, which is devoted to 7 chamber works by Gabriela Ortiz, couldn’t be more different, and her distinctive voice is heard in each, the expressive range wide, yet classically contained.

From the mercurial “100 Watts ” ( 1998 ) which Ortiz revised in 2012 for 3 members of Onix — Escuer, flute; Fernando Dominguez, bass clarinet; Edith Ruiz, piano — and which they play spectacularly here; to the curling arabesques of “Alejandrias Sonoras ” (2012) for Escuer’s solo flute; to “Tres Toritos ” (2011) for 3 flutes with its 3 sharply contrasted movements, the second ” Tregua ” ( Truce) is especially striking with Escuer’s flute line floating over a nearly motionless bass line provided by Mary-Elizabeth Thompson and Leonardo Bajarno..

The 2 vocal works — “Tres Haikus ” ( 2012 ) — which aren’t really haiku because they’re not in 3 stanzas of 5-7-5 syllables each –,and “Rio Bravo ” ( 2011 ) are more ambitious. The images in Maria Barnarda’s poem — “El cielo es un piedra ” — are arresting — and Ortiz’s setting for mezzo Carla Lopez-Speziale and cellist Natalia Perez deepens its sense. Ortiz’s 2011 setting of Monica Sanchez Escuer’s poem “Rio Bravo” for Lopez-Speziale, Alejandro Escuer’s flute, and crystal glasses, evokes the psychological dislocation of the women in the poem trapped on both sides of the US/Mexico border. But Lopez-Speziale’s voice is miked too far back, and Escuer’s flute too closely. The floating ” dreamlike” sense of of the piece is there but it doesn’t get under your skin.
But fortunately there’s another version of “Rio Bravo ” on Ortiz’s 7 works Grammy -nominated CD ” AROMA FOLIADO with the LA-based Southwest Chamber Music,which does get under your skin. From\ the “simple ” fact of the substitution of Evan Hughes’ baritone for Lopez-Speziale’s mezzo, and the substitution of Lorenz Gamma’s violin for Escuer’s flute, which gives it a dark and deeply human urgency, Hughes’ singing sturdy and expressive, his sound beautifully supported and extended by Gamma’s violin, as if they were lovers, for what is love but the closing of distances between?

The string quartet “Aroma Foliado “, which Mainly Mozart commissioned in 2006 for Cuartetolatinoamerico, is easily the best piece on the CD, but not just because it’s written for the neurotic alone in my room I’m a genius and nobody knows Western tradition — which is at its best a very pretty lie — but because it’s lyric, dramatic, always surprising but always completely logical. And though Ortiz in her program note calls it a “rondo”, which it is, it can also be heard as a series of variations on contrasted rhythms/textures. It’s learned — it quotes from Mozart’s String Quartet in D K.575 ( (1795) , and Bartok’s 1929 Quatet # 4 — not academic — sonorous, imaginative, and — ” foliate ” — as its title suggests — each idea springing from the leaves of the same tree.

Ortiz’s Grammy-nominated opera UNICAMENTE LA VERDAD — LA AUtTENICA HISTORIA DE CAMELIA LA TEXANA ( 2008 -2010 ) poses questions for which of course there are no answers. Did ” La Texana “, who achieved fame through Los Tigres de Norte’s ” narco ” corrido ” Contrabanda y Traicion ” ( Contraband and Betrayal ) really exist, and if she did did she drive her lover — several names are proposed — to commit suicide by putting his neck on the track in front of a train in the Mexico / US border town of Ciudad Juarez, which is sometimes called ” the murder capital of the world”? Opera has always trafficked in extreme situations and confused identities and Ortiz’s opera, to a libretto by her brother Ruben Ortiz Torres, which also questions how we make up our identities, as well as the role of the media in projecting them, is a perfect fit. Its seventy-five minute playing time goes by in a flash. And Ortiz marries an advanced yet approachable new music style with the rhythms and colors of the cumbia ( itlals ) and the norteno ( North Mexican ) sound, like a contemporary Revueltas, with frequent cross-cutting between chorus, orchestra, and soloists which mirrors the constructed identity of “la Texana “. And all the Mexican singers — soprano Nieves Navarro as three Camelias — tenors Gerardo Reynoso and Jose Luis Ordonez, baritones Jose Adan Perez and Armando Gama, and American bass John Atkins, are superb. This is one of the strongest first operas I’ve ever encountered. Brilliant. Serious. Entertaining. And the 24 piece Ensamble ULV and 17 member ULV chorus — each instrument and voice separately miked with the finest brands at SONY in Mexico City — under the alert and passionate direction of Jose Arean, and Christian Gohmer, produce a clear and truly spectacular sound.