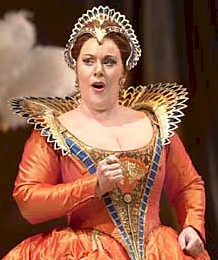 (with performance schedules and CD and video recommendations)

For nearly two decades Nicholas McGegan has conducted San Francisco’s Philharmonia Baroque Orchestra where he developed an international reputation as a champion of "authentic" performance of Baroque music. On the other hand he says, "Authenticity doesn’t mean anything. An authentic performance is one that moves you." San Francisco Opera finally has engaged this major talent from their own back yard and his debut with the company’s current revival of its 1982 production of Handel’s grand Giulio Cesare is nothing less than a triumph for all concerned. It is a performance that is indeed moving in the sheer brilliance of its musical artistry.

Giulio Cesare has three roles originally written for castrati; in the absence of castrati, these parts, in modern times up until just a while ago, were sung by women. But recent years have seen a blossoming of talented countertenors and SFO’s production casts all three to splendid effect. David Daniels as Caesar was somewhat tentative in the first act, but still astounds with his vocal dexterity in some of the most elaborately ornamented vocal music in the repertory. By the second act Se in fiorito ("The bird that hides in the flowering meadow sings the sweetest song…") Daniels was in excellent form, not only vocally but also in his strong acting and confident stage presence.

The real surprise here, however, was the Tolomeo of Bejun Mehta in his first SFO appearance. Debuting at major companies everywhere, Mehta is a star on a rapid rise. He has a powerful and brilliantly clear countertenor instrument and is, as well, a strong actor, capturing the evil King of Egypt with verve and a sly twinkle, too.

In the midst of such quality singing, soprano Ruth Ann Swenson’s Cleopatra soars into its own stratosphere. Over a long evening (nearly four hours) her purity of tone, accuracy of pitch, and perfection of phrasing never once flagged. Where other sopranos would be stretching and straining to meet the extraordinarily difficult challenges of this music, Swenson sailed through seemingly effortlessly, securely, and with unmatched musicality.

Felicity Palmer, as Cornelia, sees the severed head of her husband early on and thus is required mostly to grieve and pine ("Bereft of every comfort, I hope for death in vain…"). Her arias were effectively delivered, significantly enhanced by her strong acting. Ruxandra Donose, memorable at SFO as Nicklausse and Poppea, made a dashing figure in the pants role of Sesto, who is as locked into revenge as Cornelia is into grief ("Awake my fury and wreak bitter vengeance on the tyrant.") Their duet was yet another of the exquisite moments of music-making in an evening rich in such pleasures.

The production, owned by the Metropolitan Opera, uses flats and scrims painted to look like stone blocks representing the monumental palace. These are then supplemented with a variety of obelisks, sphinxes, platforms, doorways, plumed fans, sunbursts, candelabra, lances, eagles, and cushions for various scene changes. It’s in the spirit of an artificial, fantasy entertainment of the 18th century, rather than an attempt at realistic or historical accuracy of any sort. (The sphinxes are female, for example–never seen in Egypt, but an element of neoclassic design.) Similarly the lavish costuming draws on many periods; it’s like a fancy dress ball, eye-candy for a drama that has little actual onstage action, but is more a series of set pieces.

Giulio Cesare is a masterpiece of Handel’s beautiful and ever-inventive music, created to showcase brilliantly accomplished voices. Surely, he would have been pleased last night.