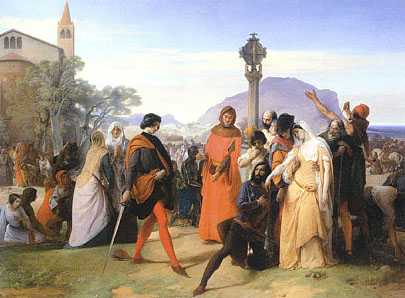 The music of Verdi’s I Vespri Siciliani opens majestically and alternates in turn with playful and emotionally dark interludes. Coming after Rigoletto, Il Travatore, and La Traviata, Vespri, infrequently performed in the contemporary repertory, offers the work of the mature composer.

Washington National Opera opened its fiftieth anniversary season with this grand opera of passion and revenge. Under the baton of maestro Placido Domingo, the first notes of the overture seemed uncertain. Shortly thereafter the musicians settled in and the satisfying music of Verdi flowed. The opera is set in and near Palermo in 1282 AD and concerns the Sicilian uprising against the occupying French. The operatic twist is that the French governor, Monforte, reveals that one of the leading rebels, Arrigo, is his son.

Director Paolo Micciche marshals an international cast of considerable talent with soprano Maria Guleghina as Elena, tenor Franco Farina as Arrigo, and baritone Lado Ataneli as Monforte. Outstanding performances include Vitalij Kowaljow as rebel mastermind Procida, declaring his love for his country in “O tu Palermo,” a bass aria some consider the most beautiful in that register. The duet between Ataneli and Farina as his rebel son, in which the hated governor reveals he is Arrigo’s father, is both sympathetic and oddly comic. Verdi’s music lends a light touch that both Ataneli and Farina use to advantage.

Guleghina as the grieving but angry duchess Elena (the French killed her brother), and the object of Arrigo’s love, demonstrates her impressive vocal skills in the duet with Arrigo when he comes to beg her forgiveness. Arrigo is responsible for Elena and Procida’s imprisonment because, as Arrigo reveals to her, he could not let them kill his father.

Paris Opera commissioned I Vespri Siciliani, which was originally written in French by the leading French librettist of his day Eugene Scribe. Scribe’s libretto was recycled from one he wrote for Donizetti who failed to finish his opera before an early and sudden death. In the libretto negotiated with Verdi, the time, country and, of course, the situation changed. This might account for the odd interpretation by Director Micciche who has imposed nineteenth century costumes (similar to the dress of Verdi’s time) and Renaissance art on a story that takes place in 1282.

Micciche uses projections as the main element for sets. Most effective is the footage of Sicilian cliffs and waterways that move as if seen from a boat. These images heighten the nationalism expressed by the Sicilian rebels. Images of paintings such as The Rape of the Sabine Women tend to over-sentimentalize what grand opera and its big passions are all about. One particularly distracting image occurs when Monforte shows his son a letter written by Arrigo’s mother that proves Monforte is Arrigo’s father. While Arrigo reads the letter, impressionist script scrolls across the backdrop in an unnecessarily literal display.

The WNO production omits the ballet celebrating the four seasons which was originally in the third act. The ballet was part of Paris Opera’s standard requirements at the time Vespri was commissioned. However, given that the five-act opera as produced by WNO runs over three hours, the production seems satisfyingly paced without the extravagant ballet.

(17994)
$6.99 (as of January 24, 2021 - More infoProduct prices and availability are accurate as of the date/time indicated and are subject to change. Any price and availability information displayed on [relevant Amazon Site(s), as applicable] at the time of purchase will apply to the purchase of this product.)

(232)
$7.49 (as of January 24, 2021 - More infoProduct prices and availability are accurate as of the date/time indicated and are subject to change. Any price and availability information displayed on [relevant Amazon Site(s), as applicable] at the time of purchase will apply to the purchase of this product.)
related posts