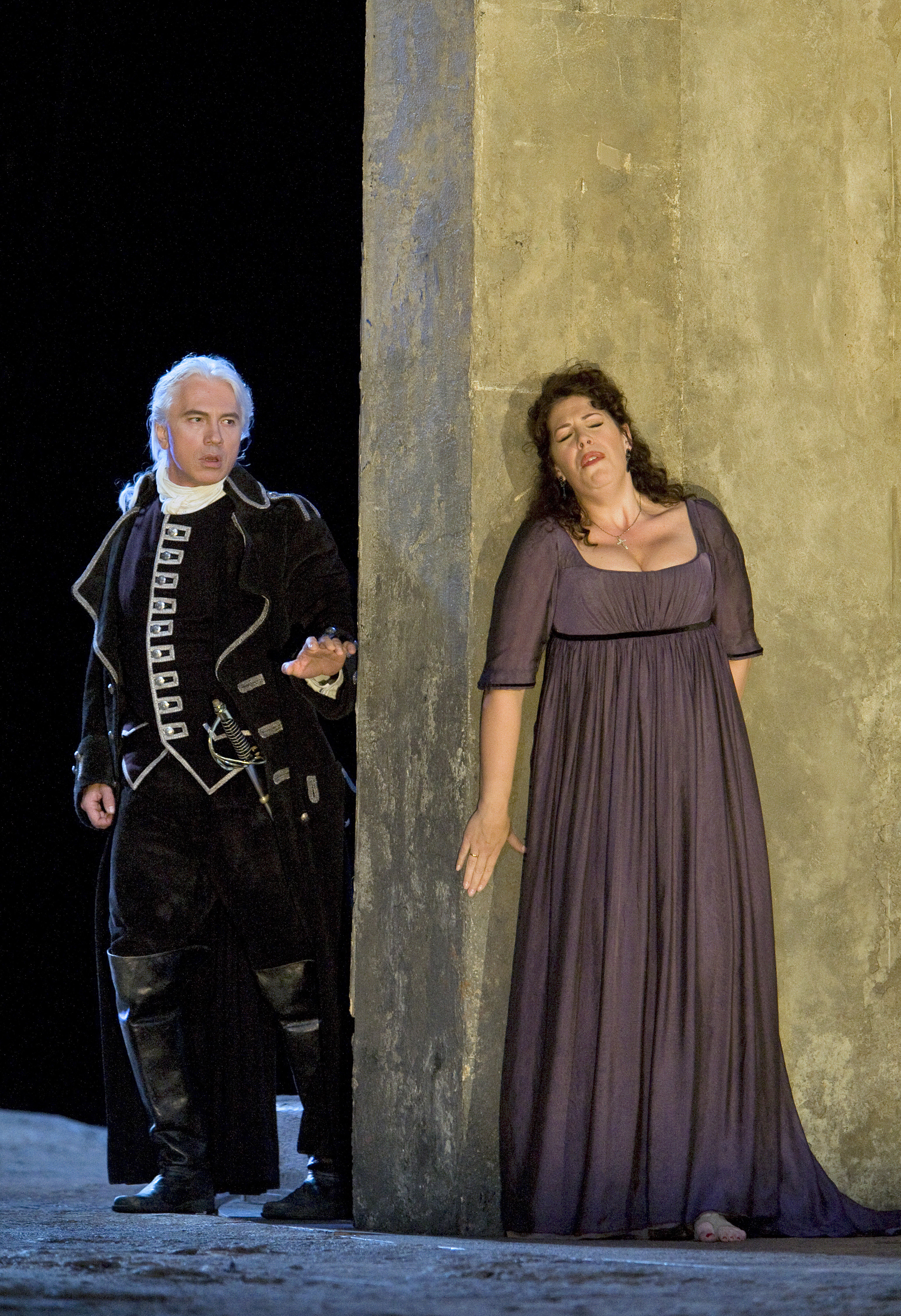 Someone once said that “Il Trovatore” has the most glorious music and the silliest story in the entire Verdi canon. Probably so. Certainly the tale of two brothers, one raised by gypsies, the other a nobleman – unknown to each other until they fall in love with the same girl – doesn’t resonate strongly with audiences of today. Neither does the subtext of Gypsy persecution and bloody revenge. But, with a little creative tweaking by a good director, stunning stage pictures created by innovative set and lighting design and a lot of that gorgeous music delivered by a strong cast and fine orchestra, it goes down real easy.

San Francisco Opera’s season opener provided a fine musical showcase for its new music director, Nicola Luisotti. The orchestra played beautifully, supportive but not showy and the singers … well, the singers. The cast is headed by two international superstars, each in what are generally considered “secondary” roles. But, when you remember that Verdi originally considered calling the opera “Azucena.” showcasing the vengeful gypsy foster-mother of the hero, the troubadour of the title, Azucena no longer seems such a secondary part. And the blockbuster mezzo, Stephanie Blythe, certainly riveted all eyes and ears when she was on the scene. I have, many times, heard the great Delora Zajick – who of late has owned this role – and before her, Fiorenza Cossoto, but never have I heard such a powerful Azucena as Blythe.

As for the other superstar, the hunky Russian baritone Dmitri Hvorostovsky, he tends to command the stage just by walking out there with that amazing shock of white hair. Unfortunately, he lacks the acting chops to match his vocal prowess. But the Count di Luna can get away with shouting commands and looking haughty most of the time and, in his final scene with the disputed lady there was enough chemistry between them to transform it into something special.

And now to that lady. Why the American soprano Sondra Radvanovsky has taken so long to get to San Francisco, after conquering most of the world’s leading opera houses is a mystery perhaps revealed only to those who book opera singers. She was a luminous Leonora, with clarion high notes, impeccable bel canto technique and such believable acting that she made the men in her life, the Count and Manrico, the troubadour (Marco Berti) look really good. She is a treasure and a find and hopefully she will return to the West Coast soon again. Berti, something of a Verdi specialist, although he does some Puccini and Donizetti from time to time, was the weakest link in this quartet of principals and he was pretty darn good. As in his “Don Carlo,” Verdi weighted this opera with so many leading roles it’s hard to win ‘em all. Berti indeed sang well, just not quite as well as the other three.

The lighting and sets in this production, which is shared with the Metropolitan Opera and the Lyric Opera of Chicago, are stupendous. The magic starts before the curtain even goes up with a stunning drop painted in dark earth tones in the manner of Goya’s “Disasters of War.” Mouths open in agony and eyes filled with horror get you in the mood for what is to follow. Charles Edwards’ set, dominated by a sheer wall, rotates on a turntable, accommodating the many scene changes quickly and efficiently. The lighting, by Jennifer Tipton, casts giant shadows of the singers on that wall and the effect is spellbinding. Mysterious posts, looking like burned tree trunks are present in the rear in almost every scene, reminding you of the stake at which Azucena’s mother was burned (and lending a little phallic symbolism into the mix).

Director David McVicar and movement director Leah Hausman keep things interesting as well. Camp followers vamp seductively during the soldier’s chorus. Bare-chested gypsies beat out the rhythm on giant onstage anvils during the famed chorus of that name. Impromptu fistfights break out and even the duels look real, courtesy of fight director Jonathan Rider. There is rarely, if ever, a dull moment. The Sept. 19 performance, which this reviewer attended, was simulcast to an estimated 25,000 spectators at AT&T Park, home of the San Francisco Giants. Whether in the Opera House or at the ballpark, it was a hit, a shutout, a real home run. If the rest of the season follows suit, it should be a great year for opera lovers.