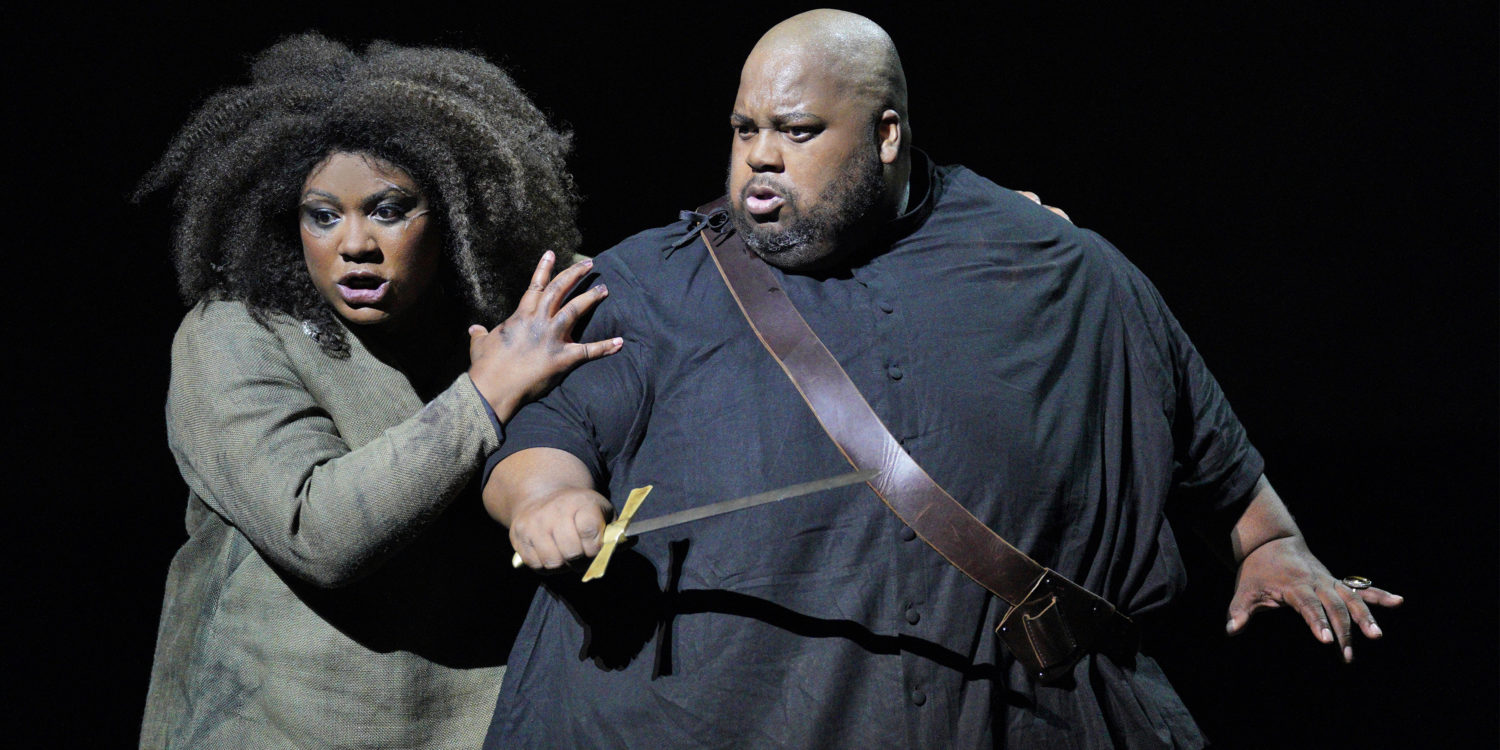 It has been a long dry fast for theater, music, and opera aficionados. OK, that was not the worst suffering of the pandemic, nonetheless, many of us were starved for the beginning of normalcy on those fronts. “Il Trovatore” by the LA Opera is a feast to break the fast and ring in the new performance year. I will grant you, it is a creaky old story anchored by a woman accidentally killing her own son instead of a royal scion. Her mother was burned at the stake for allegedly having bewitched the royal babe. The daughter, Azucena (Raehann Bryce-Davis), to avenge her mother’s death, accidentally threw her own son on the funeral pyre and snatched the royal one. She raised the scion, Manrico (Limmie Pulliam) as her own son, loving him and never letting on he was the infant brother of Count Di Luna (Vladimir Stoyanov).  Are you lost? Never mind, the music, the voices, and the fascinating production make up for the improbabilities. More about the production and the creative stage set designed by Louis Desire, and its own almost operatic journey from its origins at the Opera de Monte-Carlo.

The story is Verdi’s adaptation of a centuries-old Spanish play. In those times it was common to attribute the power of the curse and other nefarious antics to Gypsies who roamed Europe. Accept the premise of a curse and you are still stuck with the politically incorrect reference. At the core, modern audiences are challenged by the premise of a Gypsy woman and her curse. Do we follow Verdi’s script and call her a Gypsy? In these times we bridle at the reference to Gypsies. Here the switch to Romani seems comfortable enough. How it is handled in the Italian libretto, I cannot say. The chorus, in the dimly lit set, has white-face such as one would see in many a commedia dell’arte performance or renditions of medieval art. Is this politically correct? Do we care? It emphasizes the otherworldliness of the scene. My point is we can bend over backward to fit the standards of current reference and lose magnificent works of the past, or we can present them in a way that allows them to be the product of their age as well as ours.

The scenery and costumes designed by Louis Desire are a wonderful abstract confrontation to the dated story. Stark angles, elevations whose shifting is like another character on stage, and dramatic lighting by Bruno Post all lift one from the mire of the story. The set itself is a work of operatic drama. Somewhere off the Long Beach harbor, a cargo ship bearing the original set from the Opera de Monte-Carlo is still waiting to dock. The crew of the LA Opera was left with the task of recreating it from plans in less than two weeks. This is no normal assemblage of scrims and sets. It is an engineering challenge, replete with multiple moving parts,  which they met without a hitch. Truly a stunning achievement.

No question but that the home team of the LA Opera is first-rate. First and foremost is James Conlon and the LA Opera Orchestra. The audience roared when he mounted the podium. An old friend was back. A friend who never disappoints and who always lifts the singers. Others on the team are the powerful members of the LA Opera Chorus led by Grant Gershon. Trovatore is a feast of choral music not the least of which is the all too short Anvil Chorus. Costumed in dark rags and white faces they set an eerie mood as they faded in and out and lurked under dark ledges.

Casting “Il Trovatore” essentially requires four leads. None of the four in this production is a household name, but voices were generally powerful and well-matched. Perhaps most striking of all is Raehann Bryce-Davis whose Azucena Is both powerful and well-acted. The program described her character as suffering from PTSD. NO. That is putting a modern diagnosis where it doesn’t belong. Her character is suffering from grief as any parent who has lost a child does forevermore. Her grief is fed by her own role in the tragedy as well as the events taking place in the story. Guanqun Yu is lovely as Leonora who is seduced by Manrico’s song beneath her balcony…ah, those were the good old days…despite being betrothed to Count Vladimir Stoyanov. The starring voice was Limmie Pulliam as Manrico (for the rest of the run the role will be performed by Gregory Kunde). Here I will be politically incorrect. Regrettably, Pllman’s girth is such that a suspension of disbelief is a challenge. It is tragic as the voice of this young singer is warm and especially powerful for a tenor.

So, what am I trying to tell you? Do try to see “Il Trovatore.” The Music Center has made a conscientious effort to make the performance as safe as possible. Air conditioning has been upgraded to meet pandemic demands, masks are mandatory, vaccination status is efficiently checked at the door. If you are not averse to some risk, as exists whenever we venture forth, then you will be rewarded by a feast of creative artistry. If you are willing to face stories by well-regarded white men of yore, only slightly modified in the telling, you will be greeted by a diverse cast that is more than capable of doing the heavy lifting.