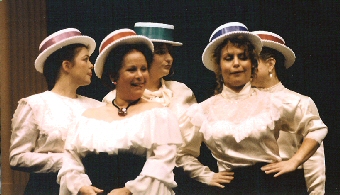 Jacket in Shantung with Satin Combo by P.I. Sport N.Y.

Offenbach wrote an astounding ninety or more pieces for the stage, most of them falling into the categories of either operas comiques or operettas. The more serious and wondrously melodic Tales of Hoffman assures his status with opera-lovers and some of the lighter works (La Belle Helene, La Grande Duchesse De Gerolstein, La Perichole, Orpheus In The Underworld) continue to be included at least occasionally in the repertories of opera companies around the world.

But what amused as light entertainment in nineteenth-century Paris does not necessarily continue to sustain interest more than a century later and most of Offenbach’s works, highly popular in their day, have fallen into obscurity now. The 1861 operetta, Le Pont des Soupirs, certainly has been largely forgotten–there is no recording extant and it’s an extreme rarity on stage today.

Leave it then to the puckish Donald Pippin to resuscitate the work, translating it into English, condensing it to its essence, and leading a performance by his Pocket Opera company under the title Carnival in Venice.

In Renaissance-era Venice, Cornarino, the Doge, has deserted his own Navy for which the penalty is death. He sneaks about, hoping to see his wife Catarina without being caught. Catarina, meanwhile has two suitors, a young page, Amoroso (a "pants" role sung by a mezzo-soprano), whose feelings she reciprocates, and the evil Malatromba, who covets not only Catarina, but the Doge’s throne as well. Plots and counter-plots abound in the customary buffa manner.

The well-established performing mode of Pocket Opera has Pippin on stage at the piano, leading a nine-piece chamber orchestra at the rear and occasionally addressing the audience directly in order to set a scene or provide a bit of telescoped narrative continuity, often spiced with droll allusions to current events, not to speak of shameless puns. The costumed cast performs in front of the orchestra, with minimal aids such as a platform, some curtains, and a few props. Andrew Morgan’s inventive stage direction makes the most of the limited resources and keeps his cast in lively motion throughout.

The style of Le Pont des Soupirs leaves little choice but to play it for the fluffiest of buffoonery, to which the cast brings high levels of energy and enthusiasm. Fortunately there is a great deal of musical talent among them as well, most notably in the Amoroso of Sonia Gariaeff and the Catarina of Sarah Elizabeth Viola. There’s a lovely bit of comical business in Catarina’s mock mad scene, during which she strews flowers about, a spoof of more serious mad scenes in the repertory.

But, while Pippin quotes Rossini labeling Offenbach ‘The Mozart of the Champs-Elysees," there’s all too little of Mozart’s sparkle in these melodies from Offenbach. Le Pont des Soupirs is an undistinguished score, forgotten by the time the final curtain comes down, no less a century and a half later. The somewhat precious libretto, emphasized in somewhat campy and often heavily hammy performances, makes it difficult to sustain interest for the two hours of the performance. It comes most alive when Pippin inserts his own comments, which offer more amusement than the operetta itself.

By performing in English, with simple productions allowing accessible ticket prices, Pocket Opera seeks to reach out to audiences not generally found at the Opera House and to stimulate an interest in classical musical theater. It is disappointing, then, to note the absence of young people in the audience for Le Pont des Soupirs–the house was a sea of gray.