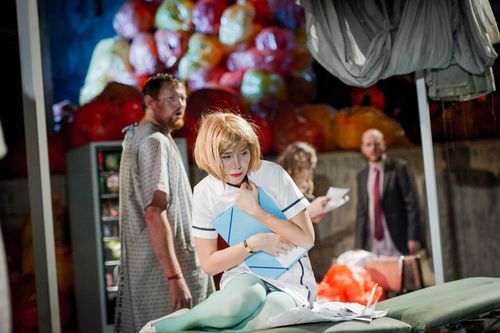 Back in 2003, Naomi Matsumoto came across an edited score at the Marciana Library in Venice. It was a handwritten score, which seemed to have been written in the 17th century with no mention of a composer or librettist. However, there was a brief note stating, “This score corresponds to the poem ‘Lo Spedale'”, by Antonio Abati. (This was the way ‘hospital’ was spelt in the Italian Renaissance.)
When music director of Solomon’s Knot, James Halliday, asked Matsumoto for a suggestion for their repertoire she immediately recommended her discovery: the Italian one-act opera that hadn’t been performed for over 350 years. After much studying, translating and experimentation, L’Ospedale is finally being presented on the Victorian stage of Wilton’s Music Hall.
Solomon’s Knot, part of Aldeburgh Music’s Open Space residency programme, has inspired an ingenious Baroque production that captures both historical and modern parallels. During the 17th century L’ospedale (the hospital) meant something much more sinister: a place for social outcasts and unfortunates who were classed as mentally deranged.
Stage Director James Hurley expands the set onto the audience, inviting us into the derelict, hopeless world of the 17th century asylum. This opera sheds light on the minds of many Italians during the Renaissance era, including the suspected librettist Antonio Abati, who often questioned the role of the state and the treatment of those who were considered to be ill.

To set the scene, the voice of a deceiving MP at the House of Commons acts as a symbol of health from Abati’s prologue and epilogue, with cheering backbenchers in the background. This resonates with today’s political squabbles, particularly the NHS. Rachel Szmukler’s set design is a dark and filthy one; rubbish bags filled with hospital waste pile onto the main stage while a vending machine hums below. A trolley stacked with urine samples and a horror movie’s hospital bed take centre stage.

However, blood and dirt aside, the music and singing is heavenly. It is executed with precision and confidence by a talented group of singers. A resentful hospital worker (Lucy Page) spreads pessimism onto four patients stuck in this shattered asylum. The doctor (Jonathan Sells) is a corrupt, lying phony. Innamorato (Rebecca Moon) suffers from a broken heart; Cortiguano (Thomas Herford) is burdened with a stressful job; Pavero (Nicholas Merryweather) is miserably poor; while Matto (Michal Czerniawski) is mentally disturbed.
A combination of sublime arias, recitatives and ariosos are incorporated with two of Carlos Gesualdo’s madrigals. These vocal passages of polyphony are sung astoundingly. Ben Pickersgill’s coordination of dim and bright lights are also effective. This is complete with a buoyant ensemble of harpsichord, lute, viola de gamba and violone players conducted with skill and flair by Halliday. Baroque opera meets contemporary politics in “L’ospedale,” a highly polished and crafty production.