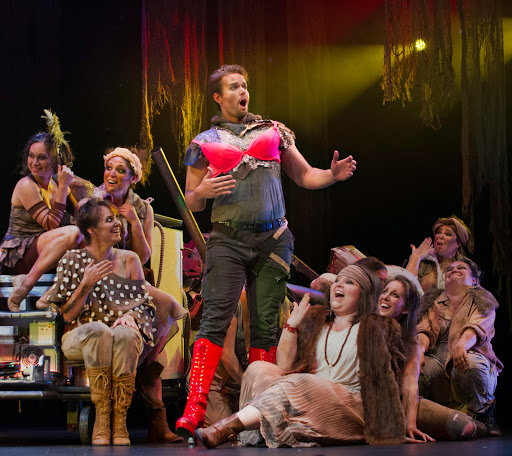 Just when you think it can’t get any better, amazingly it does. In its brief history Opera Parallèle, under the artistic direction of founder/conductor Nicole Paiement, has presented little-known contemporary works by Phillip Glass, Samuel Barber, John Harbison, Leonard Bernstein and Lou Harrison and better-known operas by Virgil Thomson and Alban Berg. Each year the productions are more polished than the year before and Osvaldo Golijov’s “Ainadamar” was an absolute triumph in 2013.

Can you top this? You bet. A double-bill of Francis Poulenc’s “Les mamelles de Tirésias” and the Kurt Weill/Bertolt Brecht “Mahagonny Songspiel” blew me away with its inventive staging, concept and, above all, fine musicianship. Bravi to director Brian Staufenbiel, who also is credited with the idea, music director Paiement, the soloists and chorus, the San Francisco Girl’s Chorus, adorable whether as desert waifs or spoiled brats, and everybody on the production team. If more people knew that opera could be this cool more people would go to the opera.

“Mahagonny” wraps around the Poulenc like a frame. Set Designer David Dunning managed to get his hands on a real (albeit small) yacht which is being pulled across a desert by men with ropes, a line of raggedy children trailing dispiritedly behind. The time is the near-future, the setting dystopian. There is no water and, as the singers keep reminding us, the whiskey is running low. Yet they trudge on, in search of something — someplace — better. What they find instead is an audience and, like Judy Garland and Mickey Rooney in those old movies, decide to put on a show.

Converting the yacht into a performance space, they present the story of Thérèse, an ambitious housewife who is bored with her chores and, changing her name to Tirésias (a legendary Greek sage of ambiguous gender), symbolically cutting off her breasts by taking off a humungous fuchsia bra and donning a uniform and fake facial hair, enlists in the army, quickly rising through the ranks. Her husband, called only “le Mari” (husband in French), decides to stay home and have kids, both for fun and profit. And he produces some 40,000 of them in a single day (don’t ask, it’s a fable). Some complications with a journalist, one of the children and a gendarme ensue and Therese comes marching home. The couple reconcile and the opera ends with the principals urging the populace to go home, be fruitful and multiply.

All very silly, right? But then the fruits of fruitfulness are starkly brought before us as the yacht is packed up again and the people trudge back across the desert in search of sustenance on an overpopulated, despoiled planet. Staufenbiel’s concept brings the two disparate works together to make an ecological statement for our times.

Weill’s music is jazzy and discordant, Poulenc’s lush and lovely, as you would expect. And the singers do both full justice. Soprano Rachel Schutz is lovely both to look at and hear as Thérèse/Tirésias and the bored, jaded Jessie of “Mahagonny.” Mezzo Renée Rapier brings a full, lush tone to a newspaper vendor in “Les mamelles” and Bessie in “Mahagonny.” Gabriel Preisser makes a fine Husband, and outstanding work also is done by Daniel Cilli, Thomas Glenn and Aleksey Bogdanov in a variety of male roles. Dancers Joseph Hernandez and Vanessa Thiessen provide a lovely interlude as a couple of wild animals (“Les mamelles” is set in Zanzibar), choreographed by KT Nelson, who also designed movement for the entire ensemble. The inventive costumes were by Christine Crook, with wigs and makeup to match by Jeanna Parham. David Murakami did the media design (the before-curtain news projections were fabulous), Frédéric Boulay the projections and lighting was by Matthew Antaky.