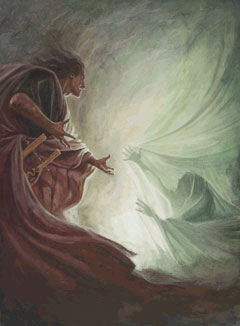 The mythic story of Orfeo ed Euridice has been one of the standards since the beginning of opera. It concerns a widower&#146;s quest to rescue his wife from Hades. With the blessing of Cupid, Orpheus is permitted to cross over to the underworld and bring Euridice home only on condition that he does not look at her. After a fantastic journey in which his path is barred by furies and the delights of Elysium, Orpheus finds his greatest obstacle is Euridice, who is baffled by his refusal to return her gaze. To relieve her distress, he looks at her and she dies, but then, in most opera versions anyway, Cupid intervenes and saves them both for the greater glory of love.

With its trajectory from death to resurrection, from grief to joy, Gluck&#146;s Orfeo ed Euridice is a likely crowd-pleaser in any incarnation, but Opera Ireland&#146;s striking, energetic production comes with much to recommend it. First of all, this is a staging of the "Vienna version," composed in 1762. Gluck famously presented two versions of this opera, the first a more experimental work. With librettist Raniere Calzabigi, Gluck tentatively reformed the conventions of Italian opera by reining in many of the formal excesses of the Opera Seria format of the Baroque era (where repetition and ornamentation were strictly enforced – see culturevulture.net&#146;s review of Giulio Cesare). Emphasizing relatively realistic emotion and thereby enhancing the dramatic qualities of the Opera, Calzabigi gave Gluck the freedom to shift music into the expressive rather than decorative register, "serving poetry by means of expression and by following the situation of the story" as the composer himself put it.

Orfeo ed Euridice, in this form, along with its follow-up Alceste, was not successful with contemporary audiences though. The second version, presented in Paris in 1774 was reorganized to incorporate popular tastes, including rescoring for mezzo-soprano instead of the original castrato and adding some ornamentation in the form of new dance sequences and arias. This longer version, Orphee et Euridice, was wildly successful, making Gluck the toast of Paris for a brief time in the 1770s. In retrospect, it can be seen that Gluck was a significant bridge between the Baroque and the Classical eras, though given the dilution of his vision and the debts owed to others, especially Calzabigi, his &#145;genius&#146; is often debated even if his influence is not.

Opera Ireland&#146;s current presentation of Orfeo ed Euridice bristles with the creative commitment of a young company, a gallery of youthful faces including director and choreographer David Bolger. This youth translates into a confident and modern production, respectful of tradition but not bound by it, creating space on stage to inject modern dance and modern design, grafting contemporary Goth chic onto classic Greek motifs and keeping the audience riveted all the way.

The production also boasts the distinctive vocal talents of Italian countertenor Flavio Oliver, the closest contemporary opera can come to the castrato range from male larynx. Oliver is marvelous: conveying masculine grace, strength and humanity through both vocal and physical performance. He is first heard piercing the low lament of the Chorus in the opening scenes with heart-rending cries of "Euridice," and his rendering of the show-stealing aria "Che faro senza Euridice?" is full of tangible emotion.

There are only three singing roles in the opera, but the stage is always alive with dancers and chorus, the latter excellent under the direction of Cahal Garvey, the former representatives of Bolger&#146;s CoisCeim Dance Theatre, who are sometimes spectral shadows lurking in the wings and sometimes take center stage to hurl the unwitting Orpheus to and fro as furies, nymphs, or spirits. Both dancers and chorus are as central to the work as Oliver and Irish soprano Ailish Tynan as Euridice. Tynan in fact seems a little drowned out more than once, especially when at the rear of the stage. Irish soprano Daire Halpin makes several entertaining appearances as Amor, clad in a one-piece outfit with a Cupid design imprinted on it and sporting dark glasses, a white cane, a purse in the shape of a heart, and little blue sneakers with wings on the heels..

(9620)
$2.84 (as of January 21, 2021 - More infoProduct prices and availability are accurate as of the date/time indicated and are subject to change. Any price and availability information displayed on [relevant Amazon Site(s), as applicable] at the time of purchase will apply to the purchase of this product.)
related posts