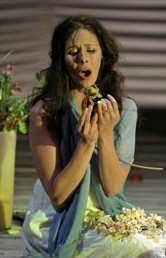 Opera Company of Philadelphia’s season closer was the U.S. premiere of Hans Werner Henze’s “Phaedra.” Its high-concept production design proved to be thrilling opera-theater and very much suited to OCP’s developing chamber series. Henze and librettist Christian Lehnert shorthand the steamy tale of Phaedra into a challenging five-scene, 90-minute structure. Artistic Director Robert B. Driver draws from the various sourcesEuripides and Seneca’s plays of Phaedra, as well as Henze’s autobiography.

Composed in 2007, the year that Henze’s partner of 40 years, Fausto Moroni, died. Driver interprets part of the story with autobiographical elements from Henze’s life. Driver boldly used a subtext that reflects the composer’s experience of being condemned by his father (a Nazi) for being homosexual and his self-liberation on the isle of Nemi, where the composer and his lover lived.

Otherwise, “Phaedra” is the convoluted legend of the vanquishing of a mythical Minotaur, Phaedra’s incestuous desire of her stepson, warring goddesses Aphrodite and Artemis. and (through the death and rebirth of Hippolyt), an exploration of a universal story of outcasts that even leaves sympathy for the Minotaur. This is Olympian soap opera.

Mezzo-soprano Tamara Mumford plays Phaedra with clamorous vocal menace, as she stalks her stepson. At one point, she wears a nude body stocking with piping around her breasts, a la Theda Bara, and the lusty German lines border on camp. But Driver stages with dreamy theatricality, floating the singers around each other.

William Burden has a lot of tenor heavy-lifting as Hippolyt in the initial scene, but starts to reveal the interiors subtly. By the time he is prostrate, at the mercy of Phaedra and later as Virbius, freed from “the cage,” he is equally commanding. Elizabeth Reiter is an icy Aphrodite, but soprano-sultry. Anthony Roth Costanzo’s Artemis, goddess of the hunt, is given the most dimension vocally and as a character: His countertenor stream is a labyrinth of interpretive vocal skill.

Indeed, there are many stand-alone vocal passages, but eventually all of the singers are straitjacketed by Henze’s circular vocal lines that often retreat to barky resolutions. Henze’s orchestral template is more liberated; it has narrative scope even with seeming non-sequiturs. The atmospherics included an array of instruments that vanish and disappear, with intrigue—disquieted vibes, a ghostly piano, a shadowy violin, forceful orchestral flares. Conductor Corrado Rovaris articulates and equalizes this erratic template with sustained skill.

Henze’s device of having his characters singing directly to the audience, instead of each other, doesn’t draw you into the story well, but Philippe Amand’s evolving set and lighting design do, the visuals crucially narrating the story’s fast-forward quality. A series of panels float in and out or triangulate the projections of nature and the silhouetted images. The effects are surreal and dazzling without overwhelming the music.