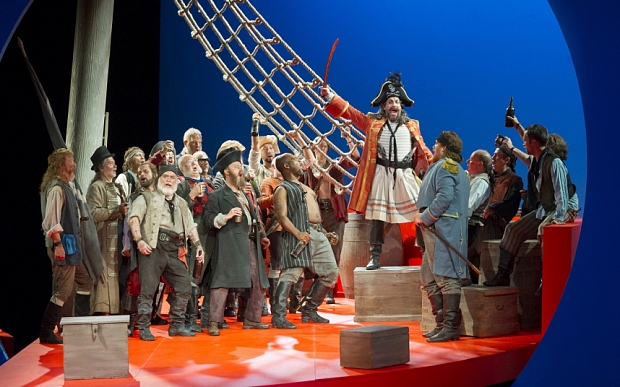 The Pirates of Penzance performed by English National Opera at the London Coliseum Joshua Bloom as The Pirate King,
© Alastair Muir

By Gilbert and Sullivan

Leigh, the mastermind film director behind such films as “Topsy-Turvy,” has taken a new leap into the English National Opera (ENO) to direct an opera for the first time, and on its premier night, it was a good enough show. The ENO – who recently released their 2015/2016 programme, which includes a reduced number of operas (down to 12) and have promised to provide 500 tickets for the price of £20 per performance – are doing as much as they can to bridge the gap between English opera and new audiences. With the addition of a brand new opera, that has never been staged at the ENO, in the hands of highly successful film director, what could possibly go wrong? Well, not much.

However, one blinding disappointment is the huge space created by the lack of props on set. Alison Chitty’s flat setting with a large hole in the middle of the stage leaves little to the audience’s imagination. Although there’s half a ship at the outset there’s no sense of a sea, but the blue paint, and for an animated opera full of silliness and G & S sing-along melodies, the staging needed sprucing up.

Leigh’s opera stays loyal to G & S’s Savoy work with costumes stuck in the Victorian era, as the composer and librettist would have liked. David Parry conducts the ENO orchestra in a tidy fashion and in the overture the music washed over the audience with warmth and serenity, yet the maestro’s pretty portrayal is non-reflective of the comedy bravado the audience were about to see.

As for voices, the ENO chorus singers were on top form. Joshua Bloom struts firm as Captain Jack Sparrow lookalike but sings better as the Pirate King. The unstoppable Andrew Shore brazenly performs as the Major General. The highlight, for me, is the farcical act between him and the Pirate King as he claims to be an orphan. Shore elevates the level of absurdity just a notch and so does Jonathan’s Lemaulu in his portrayal of Sergeant of Police, which was also exceptionally exciting. Presented like a caricature, he swung his officer’s bat and marched along with a bulge around his mid-drift and gave the audience what they wanted when singing, “When a felon’s not engaged.”

Claudia Boyle as the heroine Mabel is easy on the ears with her tantalizing coloratura, which impressed the audience ten-fold. Rebecca de Pont Davies as Ruth, the rejected pirate, is played convincingly and gains the sympathies from the audience. Soraya Mafi is also a delight with her playful execution as Edith, yet her voice was rather quiet for the large-scale stage of the ENO. And Robert Murray as the tenor lead Frederic sings with flair even if his character is deeply troubled.

Performers were well equipped and took to the stage with courageous enthusiasm, but the production as a whole needed help in some areas. For operas made up of the stuff of G & S tomfoolery it requires a little bit of intimacy in space and feeling, and many successful small-scale opera companies have reaped the benefits of this. Going back to why The Pirates of Penanze isn’t my favourite opera is mostly down to the limited plot, which fails to retain humour throughout. There are other preferable G & S operas that may have been more fruitful for the ENO: an institution that needs to fill its seats, but, sadly, I won’t be coming back for a second viewing.