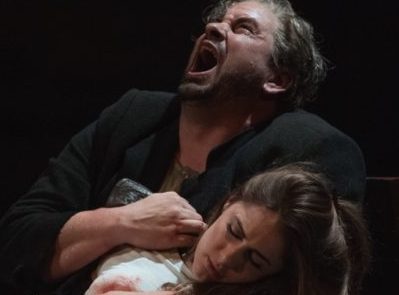 The ENO has revived an original Jonathan Miller production that took flight in 1982 – it received rave reviews regarding its unique and authentic stage work. Back in 1982, Miller’s innovation came from shifting Verdi’s original 19th century Italian Renaissance setting to the 1950s, a world of organised crime and gangster mafia. For Miller, a familiar and relatable reality, fuelled by betrayal, lawlessness, and murder, confirmed how equally disturbing and dark Verdi’s opera is.

Various accounts from those who saw it back then spoke kindly of Miller’s artistry, however, after seeing it at the Coliseum, revived by Elaine Tyler-Hall with designers Rosemary Vercoe and Patrick Robertson, whatever magic they saw then didn’t seem present here. Perhaps for the 1980s this was a novelty, but after three decades, where stage directing has clearly evolved, this may not seem so new to a contemporary audience. Nevertheless, there are some extraordinary moments and performances to take away from this revived undertaking.

The ENO has compiled an interesting programme for 2016/17 whilst, still, being scrutinised for numerous reasons; how its management have treated their chorus singers, mishandled their finances in the past few years, and produced operas which have dropped in quality, as voiced by their audience. Some critics have even questioned the ENO’s choice of casting, many of which have been handpicked from America and Canada. The argument goes that while it may be a great opportunity for the ENO to open its arms to a diverse range of performers, it limits home-grown artists who could do with the perks of performing at their so-called national opera house.

With this, our revived Rigoletto includes two lead roles sung by performers from the other side of the pond. Nicholas Pallesen as the gloom-ridden Rigoletto and his innocent daughter Gilda performed by Sydney Mancasola. Pallensen and Mancasola did a praiseworthy job of encapsulating the fundamental elements of this emotional drama, mostly due to their stage talent and performances.

Pallensen evokes a regretful and pitiful Rigoletto obsessed with his guilt-stricken curse. He boasts a good bass to match and manages to harness both a protective father and lecherous subordinate under the guard of the Duke. Mancasola is a real gem, though. She has a golden and refined coloratura which expresses Gilda’s white aura, giving a remarkable performance. Mancasola should be proud given that this is her ENO debut.

Handsome tenor Joshua Guerrero sings the role of the Duke, and he is a real ladies man with a charming tenor voice. Although his duke is arrogant and sneaky, he sings La donne e mobile romantically. You can enjoy his performance here, which momentarily flies you to a recital hall. (I can really imagine him singing with a tux and piano.) Barnaby Rea as Sparafucile is primed for the role as a cut-throat assassin and Madeleine Shaw was on the mark as flirty and seductive Maddelena.

As for the music, you simply can’t go wrong with Rigoletto. Verdi’s music is loved by many. Maestro Richard Armstrong appeared happy to be conducting the piece, on the night I saw him, and for the most part the audience got the uncut version of Verdi’s masterpiece, looming with high drama and full impact. Unfortunately, it was too loud in some scenes, and some singers’ voices seemed to be drowning.

(28156)
$13.99 (as of January 23, 2021 - More infoProduct prices and availability are accurate as of the date/time indicated and are subject to change. Any price and availability information displayed on [relevant Amazon Site(s), as applicable] at the time of purchase will apply to the purchase of this product.)
related posts