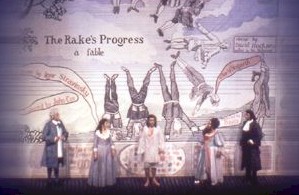 William Hogarth created his series of satirical etchings,"The Rakes Progress," in 1735, influenced in part by the literary work of his contemporary, Jonathan Swift. In that pre-photography time, the wide distribution of inexpensive prints was an important communication vehicle, though few printmakers reached the artistic greatness of Hogarth’s best work.

Then, as now, there was huge popular appeal in newspaper tales of the lurid, the theatrical, the violent. "The Rake’s Progress" series plays into that taste, a morality tale that cautions of the outcome of a dissolute life, while portraying such a life in imaginatively graphic terms.

Igor Stravinsky, inspired by the Hogarth prints, created his opera of the same title in a neoclassical form, drawing on the model of another (though later) 18th century genius, Mozart. There is no mistaking the neo in the neoclassic in Stravinsky’s gently dissonant and distinctly twentieth century sounds. The poetic libretto by W.H. Auden and Chester Kallman is a fable, tracking the descent of Tom Rakewell, under the influence of the Mephistophelean Nick Shadow. When Tom comes into an unexpected inheritance (offered as a lure by Shadow) he strays from the path of true love (his sweetheart, Ann Trulove) and righteous work, into a life of gambling, whoring, investment shenanigans, and an exceedingly strange marriage to a bearded lady. The redemptive power of love saves Tom from hellfire, but Shadow curses him with madness and he ends up in Bedlam, the madhouse.

Stravinsky’s work, in English, is accessible and somewhat dense in content at the same time. The poetic language of the libretto requires concentration and the music is more rewarding at the dramatic than at the melodic level a good deal of the time. Still, when a performance of The Rake’s Progress brings strong acting and fine singing together, it coalesces into an evening of powerful musical theater.

The current production at San Francisco Opera, graced with the spectacular design of David Hockney, is competent, but uninspired, failing to turn the elements into a cohesive, involving whole. Raymond Very, singing Rakewell, cannot be faulted in his singing, but his acting is stilted and full of old-fashioned opera gesturing; only in the later scenes does his portrayal become centered – too late, unfortunately, to restore any dramatic momentum. The role of Anne Trulove is rather thankless, a unidimensional cutout. Rebecca Evans seemed strained trying to fill the big SFO house with her pretty, if small, voice. (A case could be made that Rake should be limited to more intimate houses.)

Only when Bryn Terfel was on stage was there a sense of what Rake could be as genuinely involving musical theater. His superb voice and musicianship combine with an unforced, natural acting style and a charismatic presence that permeate to every corner of the house. He inhabited the role of Shadow and made it live. But a Shadow alone cannot carry the night.