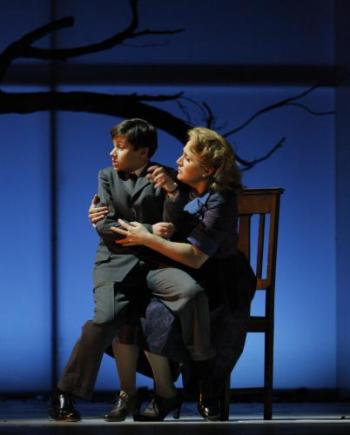 The Turn of the Screw

Life and literature are filled with ambiguities, nowhere more so than in the Henry James’ 1898 novella titled “The Turn of the Screw” on which Benjamin Britten based his opera. A murky tale of good vs. evil, natural vs. supernatural, LA Opera brings this closeted, riddle-filled story to life in a production originally created by Jonathan Kent for the Glyndebourne Festival Opera and beautifully mounted here at the Dorothy Chandler Pavilion by Francesca Gilpin.

Originally set in the English countryside at the turn of the century, this production has been updated to the 1950s. Britten wrote “The Turn of the Screw” in 1954 in an amazingly short period of four months. He chose his friend, Myfanwy Piper, who was better known as a set designer, to write the libretto. Due in part to his translation of the James’ story, this libretto creates confusions that are left to the audience and its imagination to decide what is really taking place in this puzzling story.A brother and sister, Miles (impressively sung and acted by 12-year-old Michael Kepler Meo) and Flora (a pert Ashley Emerson) are left in the care of a governess (Patricia Racette) who comes to tend them. The set, a sparsely furnished house, cleverly conceived with a rotating stage and window/door by scenery designer Paul Brown and brilliantly lit by lighting designer, David Manlon, greatly helps to convey the light and dark emotional subtext of the story.

The production opens with a prologue, sung by a narrator, tenor William Burden, making his company debut in this production. He explains that he has found memoirs written by a governess long ago who was charged by the children’s guardian to take full responsibility of them and never bother him again. Set in a Joseph Cornell-like box with old film footage flickering on the back of the set, the scene cleverly shifts to the governess—we never actually know her name—sitting on a train taking her to Bly House while musing about her new situation. Throughout the two-act opera, which is divided into 16 variations or scenes, the set expertly moves and shifts to create both the inside of the house and the foreboding lake beyond, curiously done with the addition of a leafless dark limb of a tree jutting across the stage.

The happy life of the household changes dramatically as a letter arrives informing the housekeeper, Mrs. Grose (Ann Murray) and the governess that Miles has been expelled from school but leaves no reason as to why. Through the variations, the governess becomes aware of the ghostlike presence of Peter Quint (masterfully sung by William Burden), who was valet to their uncle/guardian and who, it seems, had been involved in nefarious activities with both Miles and the previous governess, Miss Jessel (ably sung by Tamara Wilson), who drowned. Both Miss Jessel and Quint appear in different scenes in Act I attempting to draw each child from their innocence towards the darker side. The governess fears that Quint has come for Miles and soon realizes that Miss Jessel’s appearance has Flora in danger as well.

Act II begins with a gorgeous orchestral prologue. Quint and Miss Jessel reappear together to argue about possessing the children, singing “The ceremony of innocence is drowned.” The undercurrent of sexual relationships is present, but again ambiguous and murky. Flora and Miles alternate between singing nursery rhymes, and more peculiar riddles based on Latin names for the male genitals (Miles) while Flora sings the names of the seas of the world ending with the Dead Sea. Foreboding is ever present. If all this seems incomprehensible and bizarre, it is because it is. It seems to be the intention of both Britten and the librettist to keep us wondering and guessing throughout. This production does a fine job of doing just that.

On the other hand, Britten’s score is carefully thought out with a motif for each character. With theme and 16 variations (eight in the first act and eight in the second), the story is carried by his masterfully crafted musical vision. Based on the circle of fifths in the music, the chamber orchestra of 13 musicians, artfully conducted by James Conlon (who will be conducting a number of works by Britten in the composers’ centennial year, 2013) conveys much of the emotional content of the story. Although sparse (and some would argue without “singable” arias), Britten brings out the characters’ intriguing personalities through his beautifully developed musical lines based on a 12-tone “Screw” theme. With only six singers, 2 of them being children—one a boy—he wisely chose to keep the orchestration to a minimum. The ensemble of outstanding musicians keeps the taut story moving with each instrument portraying the various characters.

One of the challenges in his score is that Britten chose all high voices for his six characters including the ghost of Quint (originally sung by tenor Peter Pears, Britten’s life partner). As Quint, Burden’s arias and recitatives were clear and well heard in the big hall of the Dorothy Chandler Pavilion. Less effective in this hall were the combined large voices of Mrs. Grose, the housekeeper, and the governess, whose vibratos in similar registers muddied the pitches in their duets. In solo passages, Racette’s singing was powerful and elegant. Murray’s low sotto voce passages were also beautifully articulated. I, for one, wish the opera could have been staged in a smaller, more intimate venue. Be that as it may, this opera is worth seeing in even less-than-ideal circumstances.

As the last opera of this 2010-2011 season, LA Opera has chosen this difficult yet highly satisfying chamber opera to present following the spectacular success of Rossini’s whimsical “Il Turco in Italia.” The two operas could not be more different and yet, it is that difference that makes attending LA Opera all that more satisfying.