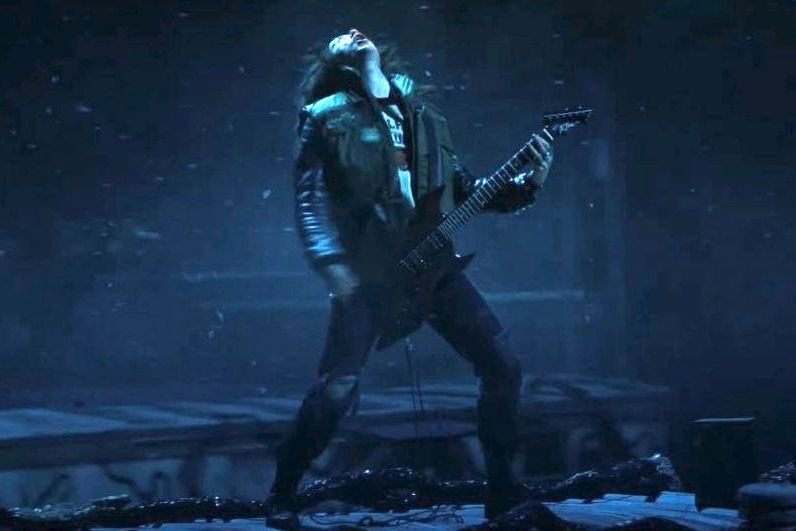 The Duffer Brothers put their kids on bikes (and the grown-ups who love them) through hell this year (literally, if The Upside Down counts) as part of a sprawling narrative mishigas that somehow clicked together just in time for a heavy metal rock opera finale.  Similar to the Golden Age of Buffy, the season’s supernatural scenarios weren’t exactly relatable, yet the emotions — of loss, depression, and hard-won catharsis — were viscerally satisfying while playing on our history with characters we’ve known for years by this point (including some we’ve seen grow from pre-adolescence to the verge of adulthood for still yet more lump-in-the-throat nostalgic eye moistening).  Moreover, the season’s Big Bad was truly unnerving, the reference to 1980s D&D panic was cleverly inevitable, an era-accurate subplot of unspoken love was painfully poignant, and Kate Bush was practically a member of the ensemble given the prominence of “Running Up That Hill” as it permeated the season (and my cold black Gen-X heart).

One teen winds up in a foster home, another loses a grandparent, their friend gets a job as a roofer, and a vengeful deer spirit takes down a secret cabal of shitass Illuminati in storylines that somehow coexist side-by-side in a state of everyday wonder.  Hardscrabble working class existence in America (let alone reservation communities) is rarely depicted in the media except as poverty porn for the overprivileged.  Yet the second season of this gently groundbreaking series by Sterlin Harjo and Taika Waititi captures the absurdity, quiet desperation, and heroism of ordinary life with a healthy dose of humanity largely missing from the “aspirational” 21st century entertainment industrial complex.

The only thing bumping the swan song of Vince Gilligan’s amazing crime drama to bronze medal status is a nagging sense of what the prequel’s ending might have been had it not been obligated to link to a predecessor series it had largely evolved beyond in terms of character development and moral/emotional nuance.  Nevertheless, the final 13 episodes in the story arc of grifting lawyer Jimmy McGill and his radioactive relationship with soulmate Kim Wexler provided more indelible performances, nail-biting suspense, quotable lines, and jaw-dropping twists (especially THAT moment) than most other series achieve in their entire runs.

Yes, topping a character as memorable, relatable and beloved as Season 1’s Armond (forever in our hearts) was never gonna happen.  And, yes, the second season of Mike White’s sleeper hit wasn’t nearly as focused on all the rich-bashing we enjoyed so much the first time around — which, of course, was precisely the point as the Season 2 storylines deliberately veered off into fresh thematic terrain with subplots about romantic, personal, and cultural self-deception (among other things) while tightening the screws on a slow-boiling mystery that built to a sad yet satisfying white knuckle climax.

Even when individual episodes of Donald Glover’s surreal sociological omnibus miss the mark, they’re at least generally thought-provoking.  And when they’re firing on all cylinders, they take up space in your head like memorable indie films, from season two’s classic horror comedy “Teddy Perkins” to numerous highpoints of the fourth and final season like the mockumentary reevaluation of hidden subtext in The Goofy Movie and “Andrew Wyeth. Alfred’s World.” (a gripping bottle episode featuring Brian Tyree Henry’s beloved, world-weary rapper, Paper Boi).

Though not quite as focused as the standout second season, creator/star Ramy Yousef and his team delivered another fantastic collection of episodes in this third go-round about a Muslim-American family living in New Jersey — including a rare glimpse of Middle East tensions from the Palestinian side and complicated romantic subplots for several members of the regular ensemble (including Laith Nakli’s Uncle Naseem, a semi-closeted Egyptian MAGA, one of the most layered and fascinating characters unleashed on small or big screens in 2022).

Not only was Search Party unlike most TV, but each new season of the show was unlike the one before as the story morphed from a comedy of youthful alienation to crime and courtroom drama dipped in tabloid culture before ultimately wrapping up in science fiction apocalypse mode.  And yet, all the weirdly distinctive flavors somehow worked together in the same moveable feast thanks to a consistent creative vision (leading to a series finale which eerily bookended the very first episode), aided and abetted by the endlessly watchable central ensemble of Alia Shawkat, John Reynolds, the indispensable John Early, and Meredith Hagner.

America’s sweetheart Quinta Brunson hit the ground running in 2022 with the first season-and-a-half of her lovable workplace comedy about a Philadelphia public school, transforming a traditional network mockumentary sitcom into must-see TV thanks to solid laughs, an instantly likable ensemble, timely and timeless explorations of the importance (and complications) of elementary education, a refreshing lack of cynicism, and, of course, a magical cameo from hockey’s most beloved and unnerving mascot, Gritty.

In theory, Ethan Hawke and a bunch of his actor friends reading transcripts of interviews conducted for a scrapped Paul Newman memoir sounds like a terrible, terrible idea.  Yet in practice, the experimental mixture of cinematic history with biopic intimacy winds up powering an effective and moving retrospective of the life and times of Joanne Woodward’s loving, charismatic spouse, his partner’s impressive, less celebrated career, and the couple’s passionate, mercurial love story for the ages.

Night after night, Korey Coleman, Martin Thomas, and their rotating crew of co-hosts offer the online equivalent of eavesdropping on the most entertaining conversation in a cool Austin bar.  Tackling topics from pop culture and viral videos to politics and breaking news, the DT crew share reviews, insights, and personal anecdotes while interacting with an international community of friends for nuanced, funny, thought-provoking, and sometimes outraged perspectives the mainstream talking heads and late night hosts often miss.

Honorable Mention:  The January 6th committee hearings, the 2022 Emmys and SAG Awards, Stephen Colbert, Seth Meyers, Somebody Somewhere, Painting with John, We Have to Talk About Cosby, Only Murders in the Building, Survivor 43, The Amazing Race, Derry Girls, Welcome to Chippendales, Wednesday, Inside Amy Schumer, Eat the Rich: The GameStop Saga, Trainwreck: Woodstock 1999

Wildcards (potentially list-worthy shows as yet unseen by moi):  All the Yellowstones, Ghosts, Severance, Our Flag Means Death