Previously on Culture Vulture, I shared the Top Five Films I saw at Austin’s 2017South-by-Southwest Festival.

And now, my picks for additional SXSW hits and misses, coming soon to a theater, festival, streaming service, or VR headset near you! 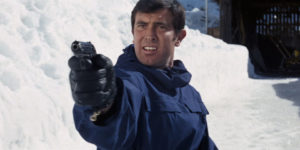 “BECOMING BOND”
If you’re a Millennial or younger, it’s possible you’ve never even heard the name George Lazenby — while Generation X-ers and up may remember him as the only one-and-done James Bond of the official 007 canon. But the star of 1969’s “On Her Majesty’s Secret Service wants you to know at least two more things about him (based on Josh Greenbaum’s cheerfully bawdy “Drunk History”-style reenactment of the Australian car salesman-turned-movie star’s tall tale oral history): first, he was a swingin’ ’60s shag machine way before Austin Powers. And second, he wasn’t fired from the Bond franchise (as many assume), but deliberately walked away from his iconic spy role (and millions of dollars) to maintain his own freedom and integrity (while making time for even MORE shaggin’…yeah, baby!) 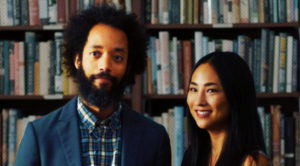 “FITS AND STARTS”
This deadpan hipster comedy about a blocked New York novelist (Wyatt Cenac) overshadowed by the sudden best seller success of his wife and former protégée (Greta Lee) plays almost like a series of Funny or Die videos, with one webisode devoted to the couple’s hapless attempts to rent a car from a bee-infested Brooklyn lot, another devoted to Cenac navigating a pretentious literary salon in Connecticut, and so on. Yet while writer/director Kevin R. Kelley’s neurotic comedy often meanders, the film eventually comes together as an unexpectedly affecting dramatization of creativity, couplehood, and the competitive tensions that can undermine both.

Where to see it: May 5th at the Montclair Film Festival, then T.B.A. 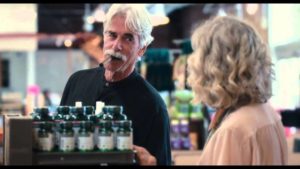 “THE HERO”
With a pace, tone, and color palette as cool and soothing as its star’s signature drawl, Brett Haley’s meditation on age and mortality features Sam Eliot as a faded Western movie star grappling with the question of whether life is still worth living after a grim cancer diagnosis. On one hand, he’s estranged from his wife and daughter, and his career has devolved from onscreen heroism to commercial voiceovers for Lone Star Barbecue Sauce, “the perfect pardner for your chicken.” But on the other hand, those VO spots allow him to live in a beautiful Hollywood Hills home, a young standup comic (who looks a lot like Laura Prepon) has the hots for him, and his next door neighbor and long-time compadre is a wisecracking pot dealer played by the ever droll Nick Offerman. Thus, the decision about whether to keep going doesn’t really seem any more strenuous than whether or not to watch this slight yet consistently satisfying character showcase on a lazy summer afternoon.

Where to see it: in theaters June 9th 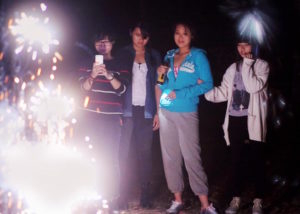 “MAINELAND”
Director Miao Wang’s documentary about Chinese teenagers attending a rural New England boarding school is a timely reminder of the commonality of basic human nature in a world of shifting national fortunes and cultural identities. More impressionistic than narrative, the film loosely orbits introverted Harry and socially adaptable Stella over the course of a couple of years as they leave their wealthy families and rigorous Mainland schools to improve their English, gain weight, and chillax alongside American students (and fellow Asian immigrants) at Maine’s Fryeburg Academy. By the end, nothing especially dramatic has occurred, yet the strangely reassuring impression is that in a competitive global economy, laid back individualism is still a valued and valuable U.S. commodity. 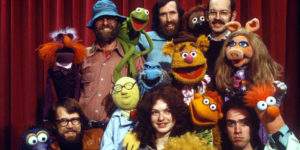 “Muppet Guys Talking – Secrets Behind the Show the Whole World Watched”
The title of this chatty documentary says it all: director Frank Oz (who voiced and operated beloved kids’ show characters from Cookie Monster and Bert to Fozzie Bear and Miss Piggy) basically sits and talks Muppets for an hour or so with former colleagues Fran Brill (Prairie Dawn), Bill Barretta (Pepe the Prawn), a scene-stealing Dave Goetz (Gonzo), and the late, great Jerry Nelson (Dr. Teeth, Snuffleupagus). One thing they conspicuously DON’T talk about is the rise and fall of the megastar Muppet, Elmo (whose original performer, Kevin Clash, was forced to resign amid allegations of sexual misconduct, though the charges were later dropped). And while that omission is perhaps understandable, there’s likewise barely a mention of Carroll Spinney, the scandal-free voice of googly-eyed icons Big Bird and Oscar the Grouch. Yet while hardly comprehensive, Oz’s doc is nevertheless an entertaining, upbeat tribute to the legacy of Jim Henson, the gone-too-soon Muppet guy who started it all. 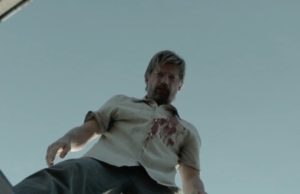 “Small Crimes”
Sure, Jamie Lannister may be an amoral, incestuous king-slayer on “Game of Thrones”, but he’s practically an Eagle Scout next to Joe Denton, the ex-con former cop that Nikolaj Coster-Waldau plays in “Small Crimes”, a nasty noir from E.L. Katz (based on a novel by David Zeltserman). In fact, with the exception of Joe’s long-suffering parents (Robert Forster and Jacki Weaver), nearly every character in this twisty crime thriller is corrupt, creepy, and/or downright sadistic, from Gary Cole’s dirty police lieutenant and Molly Parker’s shady nurse to Pat Healey as a mobster sadistic enough to make Joe Pesci squirm — and that distinct lack of a true rooting interest makes it a hard film to warm to, even as the tense, unpredictable plot (about the aftermath of a long-ago hit gone wrong) is still compulsively watchable.

Where to see it: streaming on Netflix after April 28th 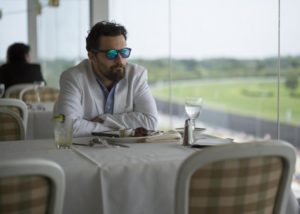 “Win It All”
Jake Johnson is probably best known for his co-starring role on the sitcom “New Girl”, and the Wikipedia description of his TV character as a “grumpy young man” pretty much captures his appeal and persona in this follow-up to “Drinking Buddies”, his previous collaboration with indie film director, Joe Swanberg. Their latest, “Win It All”, is a darker comedy of desperation about a Chicago jamoke named Eddie who’s really, really bad at poker but keeps playing anyway, digging himself into an ever deeper and deadlier hole when a criminal’s request for the gambling addict to safeguard a big bag of cash goes about as well as you’d expect.

Where to see it: currently streaming on Netflix

“Hot Summer Nights”
Elijah Bynum’s feature debut isn’t “bad” in many of the categories that matter. The performances (especially by Maika Monroe as a teen dream girl and Emory Cohen in a minor but memorable role as a waffle-loving P-Town drug dealer) are generally winning, and the production values are almost suspiciously high for a first film. Yet this coming-of-age Cape Cod crime drama is also such an obvious pastiche of cinematic predecessors that it’s almost an “SCTV” parody of itself. And, to be fair, some of the homages work fine, like the sardonic “Virgin Suicides” narration, the “Risky Business” set-up of a good kid breaking bad (selling weed rather than sex to an eager client base) and the fun, energetic “Goodfellas”-meets-“The Way Way Back” introduction of summer life in a beachfront community. Likewise, a tense, climactic meeting between the protagonist (Timothée Chalamet, himself a throwback to weasely ’80s leads like “Christine”‘s Keith Gordon) and a seemingly unhinged kingpin (William Fichtner) while a naked lady plays piano is fairly entertaining…’til you remember Paul Thomas Anderson did it way better in “Boogie Nights” with Alfred Molina and a skinny Asian guy tossing firecrackers. What really sinks the film, though, is the endless second half, when story logic goes out the window as Bynum disastrously strives for a show-offy, unearned level of epic “Once Upon a Time in America” gravitas that was silly enough when Coppola elevated adolescent angst to Greek tragic proportions in “The Outsiders” but falls completely flat in the final half hour of “Hot Summer Nights”.

Virtual reality used to be a fun but limited gimmick: a high-tech stereopticon with passable imagery surrounding viewers in every direction until they lost interest after five or ten minutes. But with the addition of sound and superior production values, the immersive modern VR available at SXSW 2017 seemed on track to someday replace TV and movies, at least based on the evidence of spooky atmospheric productions like “The Giant” by New Media Ltd. (with its title character towering high overhead) and the haunting necropolises (necropoli?) of Iranian artist Ali Eslami’s “DeathTolls Experience”. Think it’s hard getting off the couch now? Just wait ’til we all start living INSIDE our favorite shows in the not-too-distant future — a future that should be even closer by SXSW 2018.