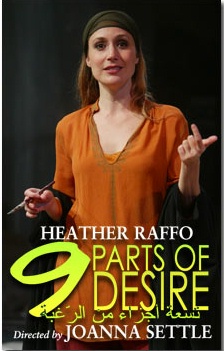 Women and Gender in Islam : Historical Roots of a Modern Debate

When God created sexual desire, goes the saying, it was in ten parts. One part was given to man, the other nine to women. So it stands to reason &#150; against all scientific evidence or rational observation — that the female sex must be protected from itself. Right? Anyway, that has been one of the rationales for suppressing the freedoms and repressing the desires of half the population in certain parts of the world. And that is the background, as well as the title of Heather Raffo&#146;s wrenching one-person show.

Purporting to &#147;lift the veil&#148; on the situation of women in Iraq &#150; and elsewhere in the Muslim Middle East &#150; the show was a runaway off-Broadway hit with the playwright as solo performer. Now it is on tour with Mozhan Marn�, a recent graduate of Yale Drama School, and it is quite a debut for the young Iranian-American actress. Directed by the original director, Joanna Settle, Marn� depicts nine characters, ranging from a teenager, imprisoned in her own home by her family &#147;for her own good,&#148; to an elderly expatriate, nursing her memories of unspeakable atrocities, as well as a bottle of scotch, in London.

There is a Bedouin woman, unlucky in love but, with an unusual degree of independence and courage, still looking for her soulmate. There is a student in New York, glued to CNN, desperate for news of the family she left behind, and there’s a compassionate doctor who has returned to help her people only to find an explosion of birth defects, a lack of medical supplies and a husband whose legs have been shot off. Perhaps the most wrenching of all is the zombie-like curator of a bomb shelter &#147;museum&#148; where more than 100 people, including her entire family, perished in an air raid. Wrong target, the military claimed, but just as deadly.

Returning again and again is a vivacious and sophisticated artist who, having achieved enormous success under Saddam Hussein, feels herself impervious to what is going on around her and refuses to leave. Living in her sister&#146;s house after her own has been destroyed, she continues to paint the plight of the Iraqui women. It is her personal protest. In her private life, however, she is sleeping with the enemy, the mistress of whatever higher-up can give her the illusion of protection. As the war escalates, her fa�ade crumbles and the terror breaks through.

Marn� does an admirable job of changing her voice and, especially, body language, on a dime. With the flick of a shawl or the donning of a head wrap she becomes a different person with each different story. It is an impressive tour de force, going on for ninety minutes, without a break. That it is not always understandable is only partly her fault. Her voice projection fails at times, making the lines difficult to understand, especially in the back of the house. But Raffo, a part-Iraqui American actress, who collected these stories onsite over ten years of research, must shoulder some of the blame. Some of the language, although poetic, makes very little sense. The opening segment, which involves a woman who comes early in the morning to the river and sends shoes off into the current and then returns, at sunset, to take them out again, is confusing. It sets a mood of futility, yes, but leaves you wondering what all that was about.

Nevertheless, Nine Parts of Desire hits far more often than it misses, showing a world that exists far beyond what we see on our television screens. It&#146;s not a very pretty sight.