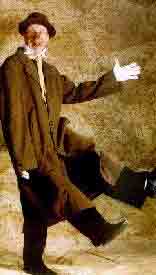 From the Greek Mimes to Marcel Marceau and Beyond: Mimes, Actors, Pierrots and Clowns: A Chronicle of the Many Visages of Mime in the Theatre

Geoff Hoyle has long been a Bay Area treasure, a gifted actor/mime/clown who has been seen over the years at the Pickle Family Circus, Cirque du Soleil, and with numerous productions at Berkeley Rep, including a show of his own, The First Hundred Years, a very funny, if improbable, history of comedy. But it was his appearance on Broadway in The Lion King that brought Hoyle to the level of national stardom. Nonetheless, the problem remainsfinding the appropriate vehicles for his particular package of talent.

Now Hoyle has put together a program of his mime pieces under the title A Feast of Fools, reportedly with plans to take it to London and Broadway. The title is apt, since Hoyle sketches a variety of fools and clowns–the Everymen of commedia dell’arte. The name has historical resonance: the Feast of Fools was a real-life celebration marked by much license and buffoonery, an annual event in many parts of Europe during the middle ages. "The central idea," writes Herbert Thurston, "seems always to have been that of the old Saturnalia, i.e. a brief social revolution, in which power, dignity or impunity is conferred for a few hours upon those ordinarily in a subordinate position."

Dignity is the quality that Hoyle’s multiple characters seem to strive for in the face of all their struggles with both the simplest and the more profound of life’s challenges. From his first entrance, wearing a bulbous clown’s nose, Hoyle does battle with sheet music, then with the music stand and the chair, and finally with the easel that holds the cards with the titles of each skit. The easel turns into spaghetti (as often do Hoyle’s limbs), so the cards end up in a heap on the floor, to be searched through and held up by hand when necessary. The violin will reappear later on to further challenge the composure of the performer, as, indeed, does the bow.

Hoyle has a partner in his high jinks for this show, a droll musician and natural comic, Gina Leishman. She plays piano, sax, accordion, even electronic musical glasses as accompaniments and as interludes for Hoyle’s routines. On stage, she becomes a character in her own right, a straight foil to Hoyle’s mad antics, starting out aghast, continuing to smile bravely as Hoyle’s characters face ongoing humiliation, finally getting quite drunk on martinis and taking on a look of woebegone resignation. She also gets to sing an amusing song-spoof, "Falling Apart Again."

The balance between Leishman and Hoyle is ideally worked out; she offers a needed counterpoint, but she never competes with Hoyle’s position at center stage. As it is, Hoyle is fully capable of filling up a stage with characters all by himself. His routine with a fool’s head on a stick brings that head alive, as a good ventriloquist does with a dummy–but this inanimate character lives without a voice or a single moving part, only through Hoyle’s genius with mime and characterization. He can make a skeleton show sadness over its lack of flesh–a sweet touch of the macabre, a reminder of mortality. And he can play two characters at once, such as two competing waiters, one suave, the other totally discombobulated. (Never has opening a bottle of wine presented such a challenge as in this skit.)

Hoyle has always had a knack for audience participation schtick, gaining many laughs, but avoiding the coyness that often can make these episodes tiresome. He does it in a funny routine as Hoylo, an utterly failed magician, and again as Mr. Sniff, a character whose big nose detects some awful smell coming from the auditorium. He also plays a highly competent violin, leavening the performance with Victor Borge-like touches. During his dance of a three-legged man Hoyle’s face lights up with the sheer joy this character finds in mastering his extra limb.

A Feast of Fools is a banquet, a smorgasbord of insights, poignancy, and humor. A six-year-old boy in the audience giggled in delight from start to finish, testimony to the universality of Hoyle’s communication.

(6655)
$9.89 (as of January 22, 2021 - More infoProduct prices and availability are accurate as of the date/time indicated and are subject to change. Any price and availability information displayed on [relevant Amazon Site(s), as applicable] at the time of purchase will apply to the purchase of this product.)