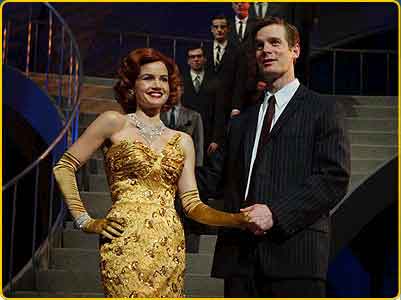 Arthur Miller is our national treasure. He is always important, tackling big issues that echo in the mind long after the performance. His high moral standards offer a tonic in these times, when morality seems no longer a criterion for judging behavior. Not to suggest that the play,After the Fall, works on the audience like a dose of corrective salts. In Miller&#146;s plays, typically, an individual consciousness pits itself against a norm or group-think or shared attitude to his ultimate benefit, a recognition of his inadequacy and the acquisition of humility.

The protagonist of After the Fall, a lawyer, Quentin, examines his failed relationships with women and the ghosts of his past amid larger political and social failures like the aftermath of the Holocaust and the McCarthy Communist witch hunt. The ugly reality after the fall of belief in a communist good proves again, for Miller, that the individual is always implicated in the state: there is no such thing as a private act.

More immediately, the play may have intended to exorcise Marilyn Monroe in 1964 two years after her death. Being taken into Miller&#146;s mind on the subject so widely celebrated in a sad way, generates several complex feelings. The Marilyn character, the adorable child in the sexy woman&#146;s body, Maggie, is so self indulgent, so infantile, so emotionally demanding and humiliating, we gladly would help throttle her. At no time do we suspect Miller of making her more monstrous than she was, if anything the reverse. He forgives her for draining him of vital energy, of soul, of life&#150;her needs were insatiable. No amount of attention was enough for the unformed girl who never grew up to independence. At one point, he warns her that her carefully controlled Hollywood image will be &#147;blown&#148; by news of her acting out and her drug addiction.

Considering that she was idolized, nearly canonized by an adoring public avid for every scrap of biography after her miserable death, Miller with this play was daring to puncture the bubble of her celebrity. But his own life too was being sucked dry by her inordinate needs for attention, for coaching, for monitoring, for assurance, for guidance physical and spiritual, when she could reach that highly evolved stage of need. She was mere unformed clay in her own view until he, someone, shaped and directed her every action. Her exigency left him psychically ragged and limp.

So, it&#146;s a memory play, set in 1962 at Idlewild airport, a marvelous metaphor for the protagonist&#146;s transient consciousness. His mind ranges over scenes of his two marriages, his half expressed desires, his deep sense of loss hinging on Marilyn&#146;s death about a year earlier, and his mistakes at a moment when he is about to marry for the third time. A sobering occasion. Women fill his past and cluster round him from time to time on stage as he talks to someone just this side of the footlights.

Director Michael Mayer&#146;s decisions about which memories to stage and which to leave on the cutting room floor&#150;apparently Miller wrote a great, shapeless mass of play–may have been more generous than wise.Not all Miller&#146;s women have an equal impact on him; here they fill the stage as they fill his mind, but not all function as signposts to an evolving consciousness, which is the main business of this drama. Holga (Vivienne Benesch), wife number two, is most important of the women in this sense. But it is the doomed woman-child Maggie who matters most to Quentin&#146;s story and to this play. As Maggie, Carla Gugino makes a phenomenal debut. She is perfectly cast as the pretty, clinging, insecure starlet and makes the character work as something more than a Marilyn Monroe clone.

The same cannot be said for Peter Krause, the charming actor from television&#146;s Six Feet Under, not for a moment credible as the protagonist, Quentin, standing in theatrically for the absent Miller. How fault character or actor for what he never was intended to be? Because the only anchor for the male role is Miller, ruthlessly examining his past and seeking absolution. Without the old man&#146;s skeleton, Quentin as a character floats away light as air. Maybe if he were ten years older, maybe if he were urban, Jewish and leftist, maybe he could give the suggestion of a writer able to author Death of a Salesman someday. As it is, Quentin-Krause is a perfectly pleasant actor playing a corporate type in a pin striped suit who couldn&#146;t write his way out of an office memo. Just what director Michael Mayer had in mind here is hard to tell. All Miller&#146;s people talk; Quentin talks; he says everything that matters to Miller&#146;s world&#150;about the holocaust, the Black List, the burden of guilt we carry for crimes against humanity. But Krause fails to convince that Quentin embodied some of Miller&#146;s sensibility. After The Fall comes midway among Miller&#146;s works, after The Crucible and before Broken Glass. By that time there was plenty to say and enough guilt to cover it up with.

More remarkable is the set, all in sweeping, gray stone blocks of an airport terminal. It’s impersonal, huge, alienating at best, but so good looking that the architecture itself plays a role. Spot lighting picks out areas for snatches of sudden intimacy between, say, Quentin and Holga, or Maggie and a stranger. The departure terminal, of course, expresses the transient nature of modern life after the fall. So too does the flow of action which moves fluidly without particular direction from one episode to the next, while nothing accrues. Movement is neither automatically linear nor forward. There&#146;s always another flight about to take off into the past, near or distant, into the territory on the right or the unknown destination to the left.