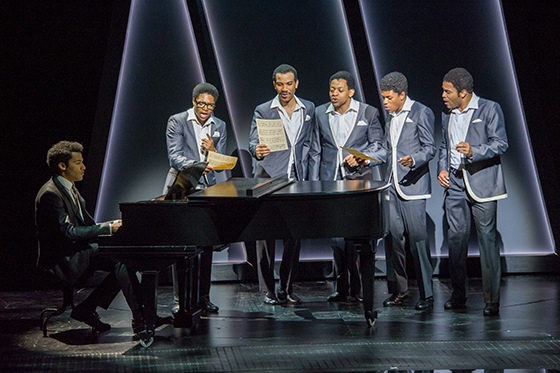 The story of The Temptations, the greatest rhythm and blues group of all time, bursts forth at Berkeley Rep in an explosion of energy and élan. Multi-talented artistic actors with soulful voices and limber legs capture the stage, backed by a fantastic band with perfect arrangements aided by complex choreography, with outstanding direction (Des McAnuff) in a technically difficult production that is dazzling.

And what could be more fun than hearing over 30 memorable rock and roll songs, with, of course, all The Temps biggest hits, including “My Girl,” “The Way You Do the Things You Do,” “Just My Imagination,” and “Papa Was a Rolling Stone,” plus lots of bonus songs, a few Doo Wop tunes (The Cadillacs’ “Gloria” never sounded so fine), some of The Supremes’ hits such as “You Can’t Hurry Love” and an upbeat version of “Shout” that makes it hard to keep seated.

Not quite an afterthought following the music (Harold Wheeler, Kenny Seymour) and dance moves (Sergio Trujillo) is the biography of the group, based on the book “The Temptations,” by Otis Williams and Patricia Romanowski, but creatively developed and deepened by Dominique Morisseau for the stage. Otis Williams, skillfully played by Derrick Baskin, the last living member of the “Classic Five” Temptations and its “de facto’ head, acts as the narrator and recounts the inspirational tale of their unlikely climb to success, filled with friendship and betrayal, heady glamour juxtaposed with the tragedy of young talent gone astray, and the pain of love and loss.

The Temptations’ fame was engineered by Berry Gordy of Motown Records during the 1960s and 1970s, after years of struggle in their hometown of Detroit. Starting with a distinct smooth and harmonic sound and a bit of glitz in their choreography and wardrobe, The Temptations were groomed by Gordy to appeal to a mass white audience, and he succeeded. Although there were eventually 24 members of The Temps over the years, the “Classic Five” were responsible for the group’s biggest hits: Otis Williams (Derrick Baskin), Melvin Franklin (Jared Joseph), Eddie Kendricks (Jeremy Pope), Paul Williams (James Harkness) and David Ruffin (Ephraim Skyes). A unique aspect of the group was that various members sang the lead depending on the song.

The Temps’ history is not an unfamiliar story in the jukebox musical genre, and “Ain’t Too Proud” could have benefited from a bit more flesh on the bone. Perhaps with a shorter first act, and (I hate to suggest it) a few less songs, more emphasis could be given to the complex and sometimes heartrending relationships among the singers and their families. For example, more coverage could have been given to the uniquely talented David Ruffin, with his troubled childhood, drug addiction and early death. Also, although narration is a convenient method of moving the story along, it does at times detract from the drama, making the musical a bit more like a revue or concert than a well-made play.

And perhaps, after all, there isn’t anything wrong with that. “Ain’t Too Proud: The Life and Times of the Temptations” is a sensational show that’s superbly entertaining with fabulous music and choreography, heartfelt acting and complicated stage techniques that work flawlessly. The house was really rocking.

This review originally appeared on Berkeleyside.com